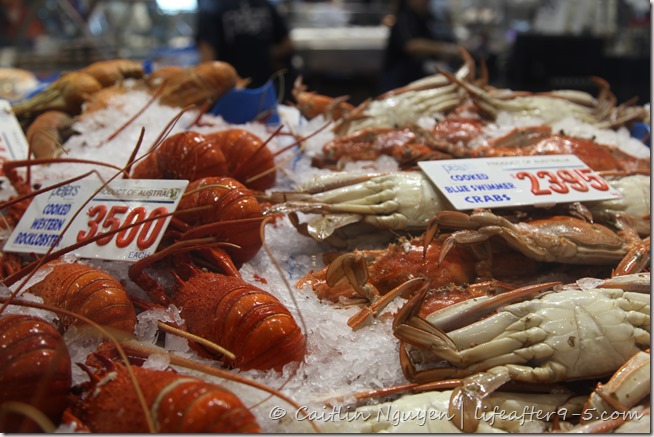 I can’t believe it’s been four months since we set foot in Australia.  I am excited to finally be able to share about our trip down under.  A little bit about me before I dive into all the great places to eat in Sydney, I LOVE MasterChef Australia.  I can’t emphasize this enough.  I’ve watched every episode religiously, usually over dinner.  It’s basically the only time I can watch the show without salivating and craving all the food.  We could not wait to go to the restaurants that appeared on MasterChef and taste the wonderful, crazy concoctions ourselves. When we were planning our trip to Australia, we knew that food would be a major component of our overall experience.  I’ve always felt that food is the heart and soul of a city.  When you go to a new city, a great way to immerse yourself in the new environment is to venture out and try the food that locals eat. It’ll give you a great appreciation for the place and people.

We were thrilled to finally be able to try ‘bugs’ (a cross between a mantis shrimp and a lobster) and many other local produce and succulent seafood native to Australia. Sydney, like New York, is a fairly large multicultural metropolitan city.  We had high expectation for the Asian influenced dishes, considering its proximity to Asia.   With so many things to sample, it was a gluttonous vacation. Here are the highlights of all the food we’ve tried: 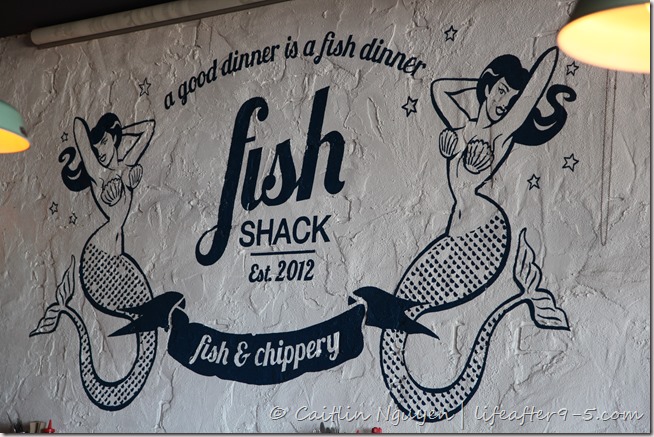 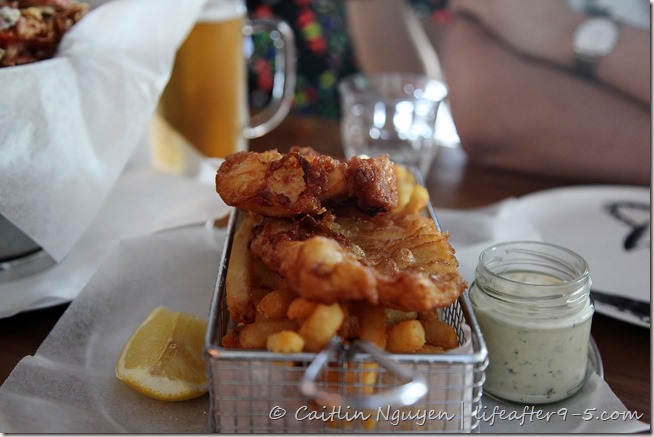 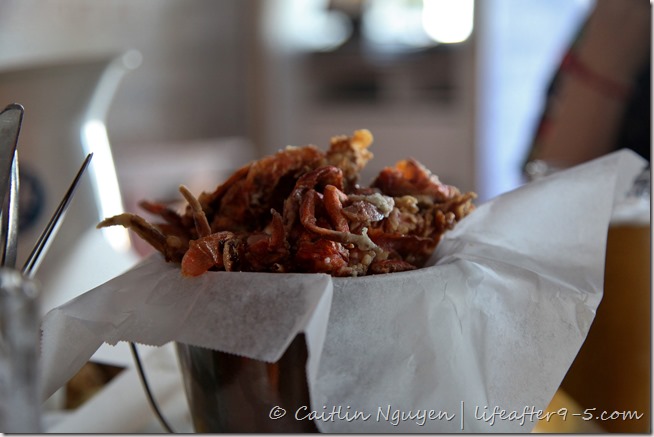 Fish ‘n’ Chips by the Beach– Our first stop in Sydney was to head over to Manly beach.  This laid-back beach town is filled with small fish shacks and seafood restaurants along the waterfront.  It’s a great place to sit back, relax (after a 25 hour flight across the world), grab a beer on tap, and enjoy the ocean view.  The most popular dish around this area is the beer battered John Dory, a local fish, deep fried and served with chips.  The fresh soft shell crab was so sweet and the best I’ve ever had.

Seafood – Itching for more seafood, we walked across the Darling Harbor and headed to the famous Sydney fish market for lunch on the second day.  This fish market has a wide variety of fresh fish and seafood at a reasonable price.  You can buy the food raw and have it prepared on the premises or get cooked seafood at the stands that cater to different tastes.  Large oysters are also on display and shucked to order.

On a warm day, you can take the food and drinks outside and breathe in the fresh sea air as you tuck into your shellfish.   The market opens daily from 7 am to 4 pm.  We had a very enjoyable lunch and it came to about $20 per person including drinks.

Food Court– Food courts in Australia are a serious eating endeavor, they not only have your regular fast food offerings, but there are also counters that serve restaurant style dishes.  The menu has a large selection, all proudly displayed on a brightly lit sign.   For dinner one night, we stumbled upon this hidden gem in Haymarket. Tucked away on the third floor of the Market City mall is a big food court with about a dozen counters offering a variety of food options including Vietnamese, Korean, Japanese and Chinese.   Ordering food is easy and seamless, you select something that looks appetizing from the picture menu on display.  When your number is called, you pick up the food and find an empty table to sit.  Once you are done eating, the food court worker will come and whisk away your dirty dishes and leave the place spotless. 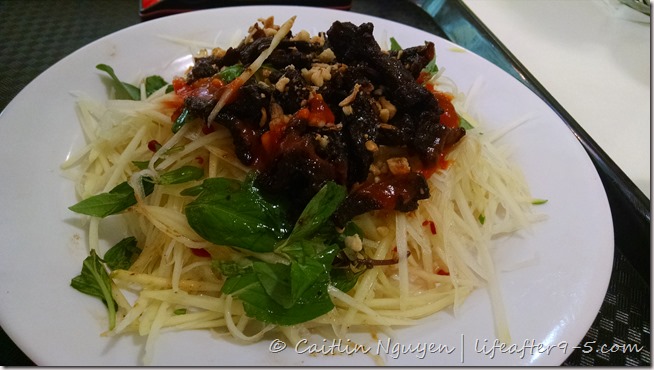 Seeing as how we were unfamiliar with a selection as extensive as this in a food court, we were not sure what to expect.  We strolled up to the Vietnamese restaurant called Bo 7 Mon Thanh Tam.  The owner was friendly and informative, helping us with our decisions. We ended up ordering a variety of dishes to share amongst 4 people.  The pho broth was rich with complex flavors.  The banh xeo was crispy around the edges.  The ground beef wrapped in wild betel leaf was juicy and goes perfectly with the delicate vermicelli and the fragrant herbs.  It ended up being the best Viet food I’ve had, outside of Vietnam. The best part is that it was very cheap, and only cost us $55 AUD for 4 people. I think food courts in North America have to step up their game. If we had more time we would have been back there every day to try all the dishes.

Cabramatta – Cabramatta is actually a suburb, about 40 minute train ride from downtown Sidney.  It has a large Vietnamese population and of course amazing Viet food.  Stepping off the train, it feels like you’ve been transported to Saigon.  Walking down the sidewalk, you’ll hear Vietnamese spoken on the street, and Paris by Night music video drifting out from the stores.  On every corner there is a banh mi place and a sugar cane stall selling drinks, snacks, and takeaways.

The streets are dotted with many restaurants selling authentic Vietnamese dishes other than the perfunctory pho noodle soup.  Here you can get bun bo hue (spicy beef noodle soup from Hue), hu tieu nam vang (Phnom Penh noodle) and canh chua ca (sweet and sour fish soup).  We even tried the deep fried chitterling, which has a very distinctive taste.  It’s nice and crispy on the outside and soft and fatty on the inside.  As I write my post, I thought back to that afternoon when I had chitterling for the first time and suddenly my mouth started to salivate. If you are a fan of Viet food, it’s worth the trip out to little Saigon.

Quay – This restaurant by notable chef Peter Gilmore is the home of the infamous snow egg that appeared on MasterChef Australia back in season 2.  It is also Australia’s most awarded restaurant, and one of two Australian restaurants on the prestigious S. Pellegrino World’s Top 50 List.  Given the high pedigree, we had to make reservations months in advance to ensure that we had a table when we’re in Sydney.

The anticipation ended when we finally set foot in the Quay dinning room on our last night in town.  The dinning area is encircled by glass walls that stretch from the floor to the ceiling and provide the perfect view of the harbor-front.  From our dinning table, the view of the opera house and the harbor bridge stretched out, lit up against the dark background.  Amazing as the view was, it was soon forgotten as we started to taste the food.  We knew going in that this was one of the top restaurants in the world but it’s still surprising how good the food was. The amuse bouche of pickled beetroot, with frozen milk flakes set the tone for the rest of the meal. Each bite exploded in your mouth with flavors and texture. 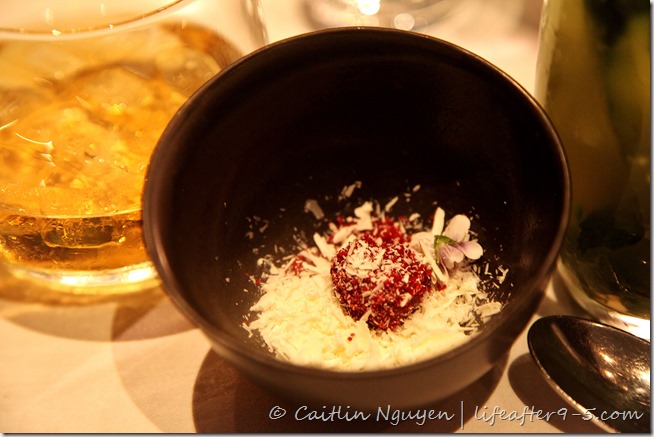 We decided to go with the 8 course tasting menu, since we are only here once.  Each course strived to show contrasting flavors, and colors, with ingredients that are seasonal and local to Australia.  My favorite course of the night was the wagyu tartar.  The horse radish sour cream nicely complimented the waguy beef that melts in your mouth.  After tasting the last bite, I still longed for more. The lobster course was also remarkable.  The lobster, sitting in a bowl of chicken fat broth topped off with sea urchin,  was crisp and lightly cooked so the sweetness was enhanced.  As the meal wound down, we finally got to the dessert course, the signature dish, the snow egg!  The exquisite egg sits daintily in tumbler glass, surrounded by a bed of granita. The egg itself made up of the smooth silky ice-cream in the center surrounded by a layer of meringue and covered by crunchy shell that’s made from melted malt biscuit.  This refreshing dessert is a textural treat, filled with layers upon layer of flavor.

The 8 course meal was over after 3 long hours, but since each course was well proportioned, you don’t feel sick and disgusting after eating for that long.  There was enough time between each course to savor the experience and have a conversation with friends.  In our rushed lifestyle, it’s not typical to sit and eat dinner for hours.  This break in the norm was a nice way to slow down and enjoy the little things in life. The climatic meal ended with a very daunting bill.  Even though the price tag is high, if you consider that it included tax and tip, it was actually quite reasonable, at least by New York standards. Even though the meal will break the bank, it is probably worth being broke to taste the food here once in your life. Peter Gilmore did not disappoint,  we left a little poorer but more sated.

Vegemite – Every morning we would head upstairs to the lounge for ‘brekkie’.  Aside from the usual spread of fruits, cold cuts, pastries and jams, they also had vegemite, an Australian specialty.  We’ve heard so much about this spread, so of course, we all had to try.  On our first day, we each grabbed a packet and proceeded to spread it lightly over our toast.  Taking a cautious bite, it tasteed slightly salty and a little bitter.  It was an acquired taste, and not one that we fell in love with.  We all went back to our usual peanut butter and jam toast for the rest of the time.

Our food adventures in Sidney were a mix of high-end and low-end.  Before we set foot in Australia, we’d heard from many people how expensive Australia was going to be.  We prepared ourselves and were ready to pay an arm and a leg for all our meals.  However, in reality, we were pleasantly surprised that it was a lot cheaper than we expected, especially if you take into account that the tax and tips are already included in the total.  Funnily enough, the cheaper meals are more expensive in Australia compared to North America, it’s not unheard of to pay $20 for a plate of pad thai. Yet when you go to a more expensive restaurant, the cost of the meal is cheaper compared to what we would normally pay in here in New York. This is because their fixed cost is higher, since they pay their employees decent wages in Australia.  I guess there is a reason why everyone is much happier in Australia.

3 thoughts on “Eating in Sydney”