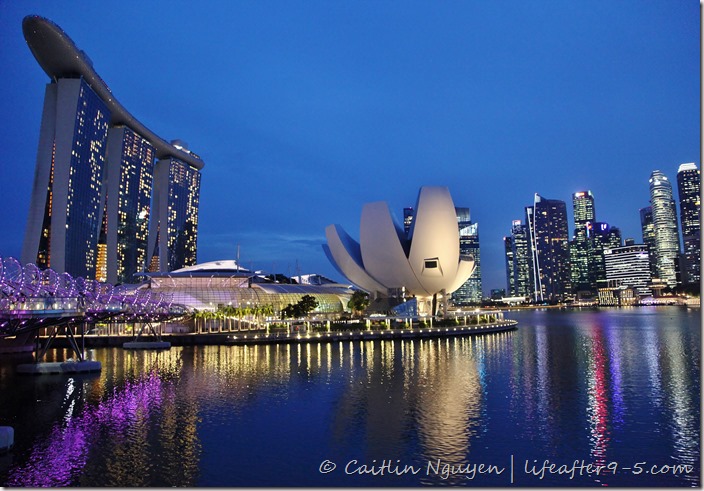 The Marina Bay Waterfront in Singapore, like Sydney Harbour and Victoria Harbour, stands out as a fine example of stunning waterside architecture that has become an attraction for tourists and locals alike. The Marina Bay is a thriving place in Singapore where people work, live, and play.  A 2.6 mile loop takes you around to the most well-known landmarks in Singapore like the Merlion, Helix Bridge, and Marina Bay Sands hotel.  It’s the perfect place to watch the boats glide across the water, admire the views, and even catch a light show at night. 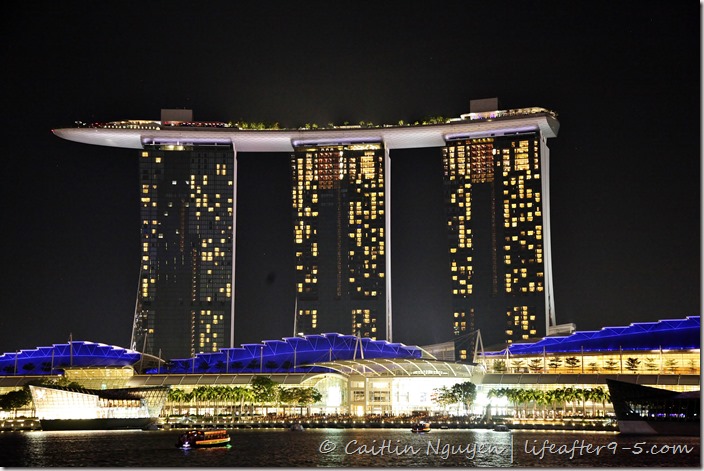 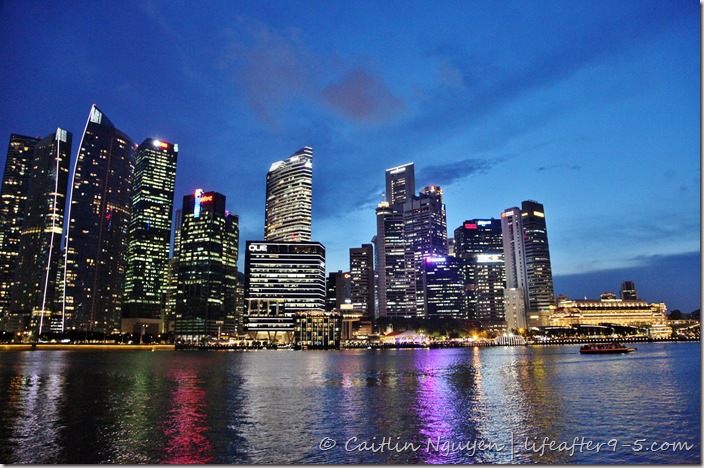 The best way to see these attractions is undoubtedly on foot.  The leisurely pace allows you time to appreciate the view of the glittering skyline and unique architecture.   The best time to go for a stroll is around sunset when you can see the sky change color as the city comes alive at night. It also doesn’t hurt that the temperature is much cooler as the sun goes down. In a city as expensive as Singapore, it’s nice to find something free to do. 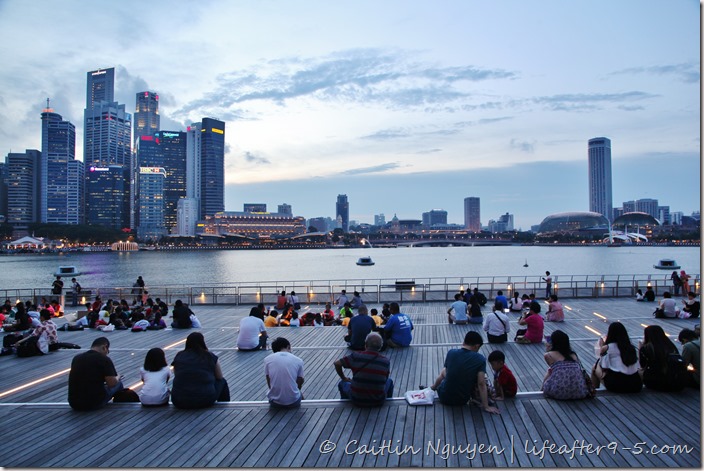 We started our walk at the tiered steps outside of The Shoppes at Marina Bay Sands. The Shoppes is a luxury shopping mall that houses many high-end brands and restaurants. On the bottom level, you can even ride on a gondola along a man-made river.  Outside, the view of the bay is gorgeous at night when the buildings are all lit up.  This area is full of people, gathering after work to play Pokemon.  This is one of the top Pokemon hot spots in the city, as evidenced by the many lures scattered around.  Every once in awhile, you may see a stampede of people don’t be alarmed, it probably means that a rare monster spawned nearby.  We decided to head left and walk along the palm lined boulevard toward the Youth Olympic Park. The wooden boardwalk is always filled with people doing their daily tai chi exercises in the morning and yoga in the evening. 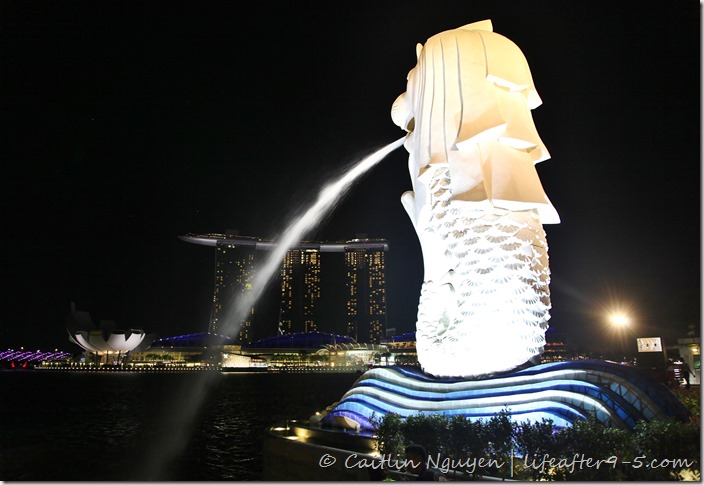 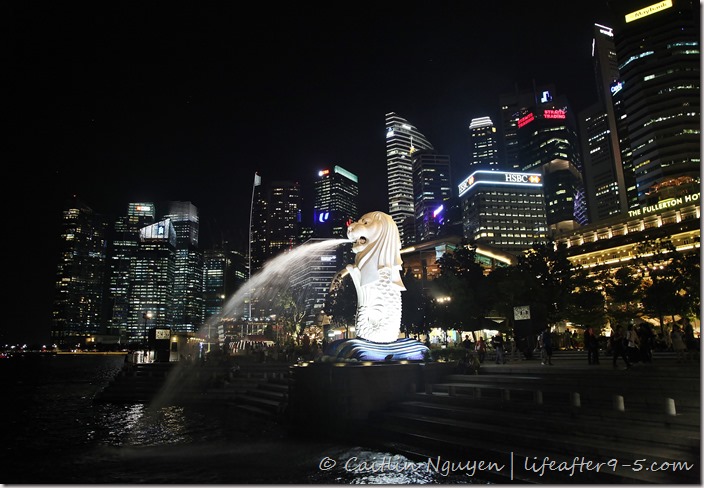 As we crossed over to the other side of the bay, we came upon one of Singapore’s most expensive hotels, the luxurious Fullerton Bay Hotel.  A little further on is the Merlion Park with its many shops and cafes along the river.  At the center of the park is the enormous 28 foot ( 8.6 meter) tall, water-spouting Merlion, the ubiquitous icon of Singapore.  The Merlion combines the head of a lion and body of a fish.  This mythical creature is the symbol for Singapore’s tourism where the fish represents Singapore’s origin as a fishing village and the lion head represents Singapura  (Singapore’s original name) which means ‘lion city’.  You have not truly been to Singapore until you visit the Merlion. 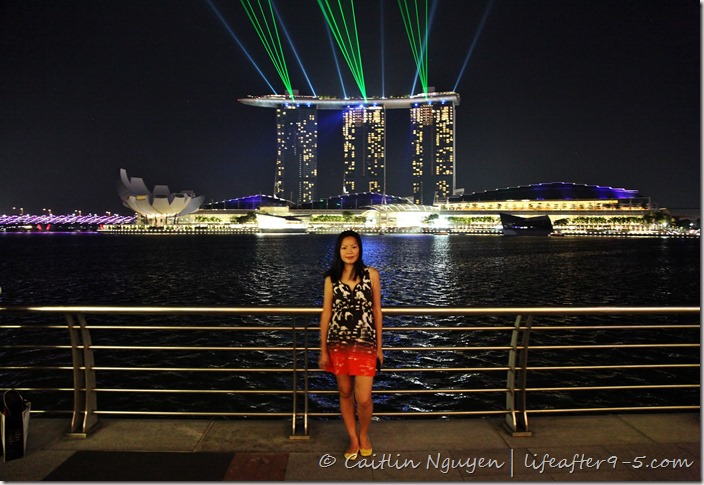 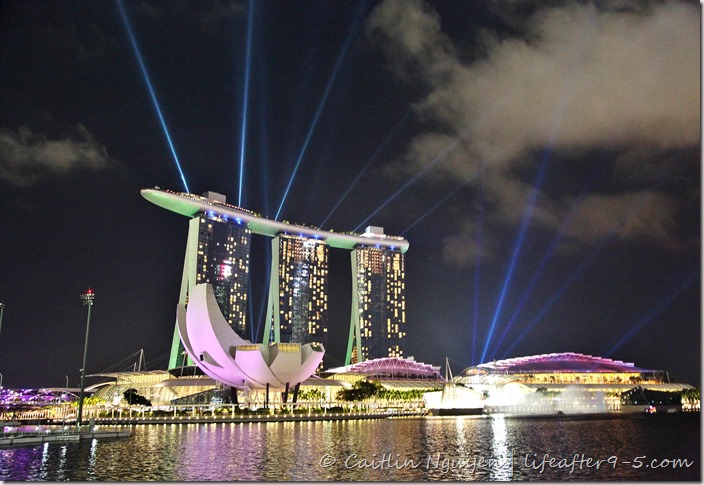 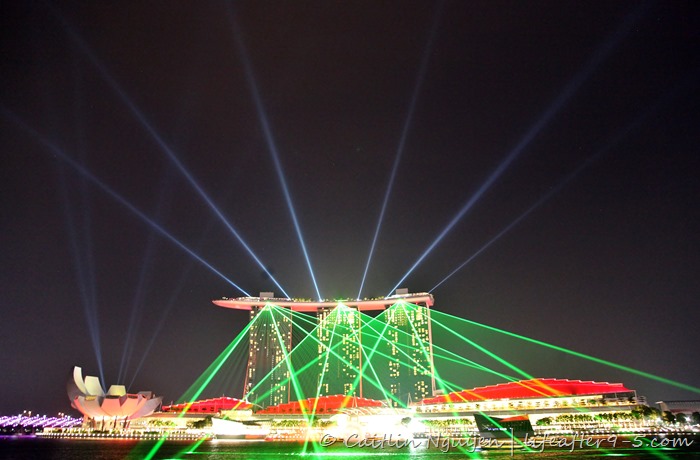 From Merlion Park you will have a magnificent 360 degree view of the bay.   It’s also the perfect place to catch the nightly light and water spectacular called ‘Wonder Full’, put on by the Marina Bay Sands hotel.  The shows start at 8:00 pm and 9:30 pm daily and run for about 15 minutes.  Colorful lasers shoot out from the ‘ship’ atop the Marina Bay Sands beaming against Singapore’s skyline like a beacon in the darkness.  This amazing visual show took 3 years to develop. The interweaving light streaming across the sky is accompanied by a 140-piece orchestra soundtrack. Personally, it was a bit much for my taste, but the experience seeing it for the first time was mesmerizing. 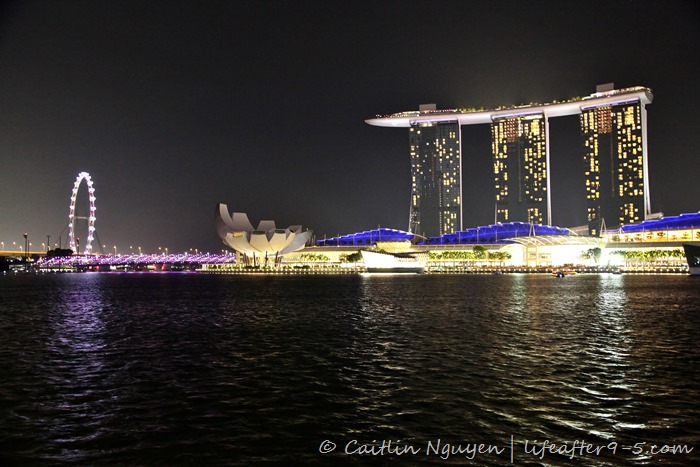 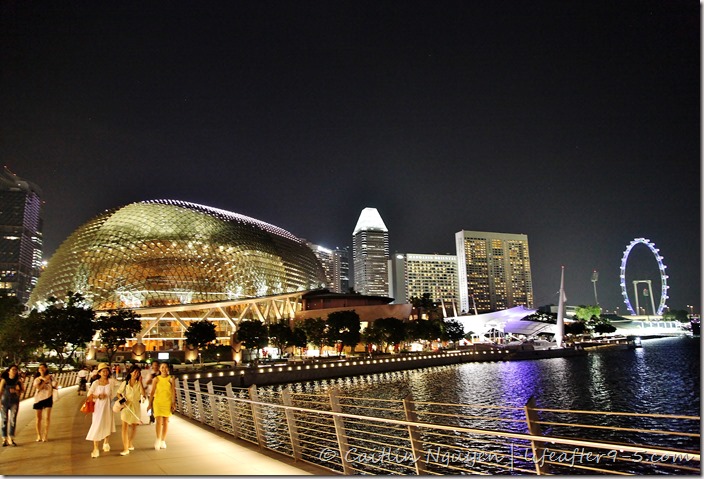 Walking along the waterfront, you’ll see another attraction – the ‘Durian’ shaped Esplanade Theatres on the Bay.  This unique complex is a performing arts center showcasing music, dance, and theater. It is located near the Marina Bay Floating Platform,  the largest floating stadium in the world. If you are hungry from the walk, stop by the nearby Makansutra food center, located right under the Esplanade Bridge for some cheap local favorites. 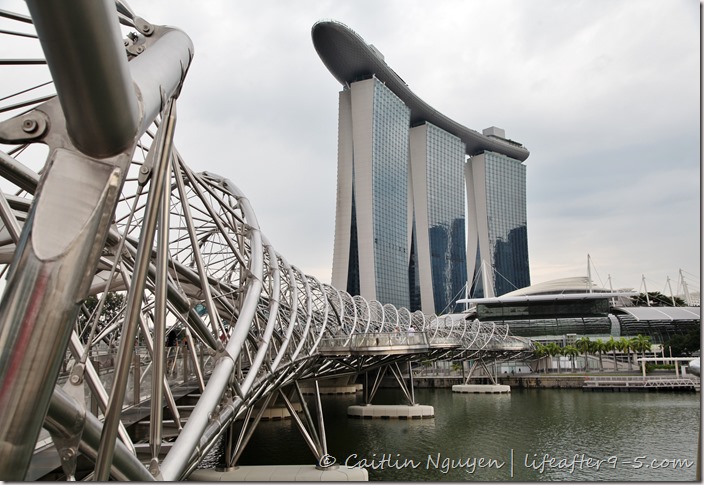 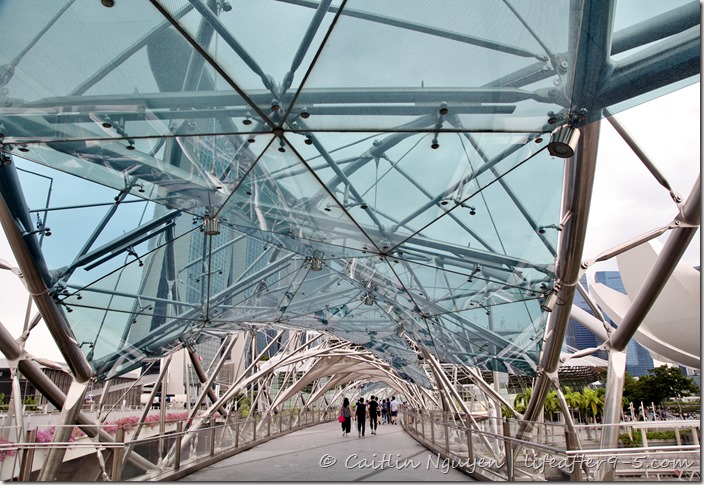 Next on the walk, you’ll come upon the Helix Bridge, a pedestrian walkway that connects the Marina Centre to the Marina Bay Sands area.  It’s hard to miss this unique spiraling steel structure as you walk along the promenade, especially when it’s illuminated by thousands of neon lights that highlight the double-helix structure. As the name suggests, the bridge design is inspired by the geometric spiral curve of DNA, which is seen as a symbol of continuity and renewal. 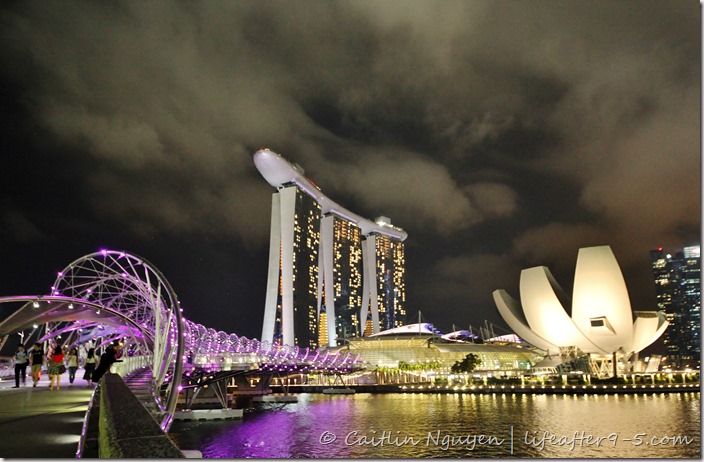 The bridge has 4 viewing platforms strategically placed along the bridge to admire the views of Singapore’s cityscape as well as the ideal place for watching events on the waterfront. 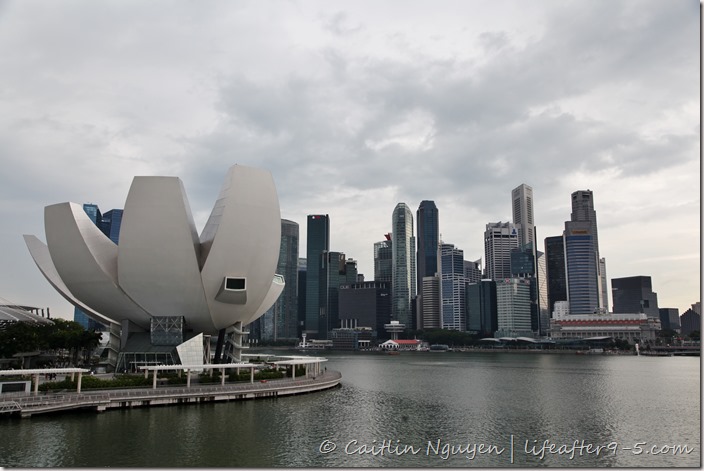 As we crossed the Helix bridge, and ended up at the 50,000 square foot Art and Science Museum shaped like a lotus flower. It is one of the premier exhibition centers in Singapore with many interesting galleries and exhibits are on display all year round. It also took us back to The Shoppes Marina Bay Sands and completed our tour of Singapore’s waterfront.