A few weeks ago we had a big burst of energy and made some serious progress on planning our itinerary for Australia. In this post I’ll try to cover some of the main planning considerations and tools we used to make our itinerary.

Planning for a big trip is in a way an iterative process. The first step should be starting with a few key destinations in mind and then the list should be refined as you begin your research. For our 2.5 week trip, we knew we’d want to visit several main spots with a good mix of cities, beaches, and nature; but not overdo it with too much running around.  The initial wishlist looked something like this:

The next step was to try to see which destinations from the list above would fit in our time frame and then pare it down. Australia is a BIG country, and some of the places listed are far away from each other. If we wanted to spend 3-4 days in each place with some extra time in Sydney, it became clear early on in the planning that New Zealand, and Western Australia would not fit into the itinerary.  After doing more research, we also decided to forego a visit to Brisbane, in favor of a spot we read about called the Whitsundays, home to some of the world’s most beautiful beaches.

As I mentioned, Australia is a big country, and getting around would require flying to most major spots. Since some of these spots are remote, flights are limited and infrequent. We didn’t want to waste an entire day flying and connecting in airports, so it would be important to optimize the direction of the route. The two most remote spots on the list at this point were the Whitsundays, and Ayers Rock in the Outback; both of those locations had what looked like one flight in and out per day on each major airline, and a delay during connection could literally cause you to lose a whole day. This was a risk I wanted to mitigate if possible.

Since I planned on using Avios award redemptions where possible for these flights, I focused on OneWorld Partner Qantas’ website route map to help give me an idea of how a routing might look. 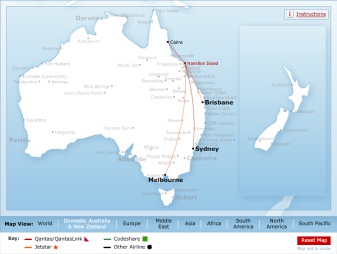 Based on the route maps, if we didn’t want to connect to get from Whitsundays (HTI) to Ayers Rock (AYQ) or vice-versa, it would require travelling through a major city like Sydney, Melbourne, Brisbane, or Cairns.  However, we’re starting/ending in Sydney/Melbourne, and we decided against visiting Brisbane, so that only left Cairns. We also did additional research using the ITA Matrix (this was covered in an earlier post) for travel options and timings between those two airports, and confirmed that if we didn’t want to lose a day in transit, we have to fly through Cairns. We researched things to do in Cairns, and came to the conclusion that it would be a good addition to the itinerary.

At this point, our itinerary for Australia looked like:

The only thing left at this point, was to search for Avios award availability and/or flight prices to see what makes the most sense. The map of our final itinerary is shown below. We were able to stick to all Qantas flights for the entire trip allowing us to leverage our OneWorld Emerald status which includes priority boarding, no checked bag fees, lounge access, and other perks. The cheaper legs were paid for with cash, the rest were award redemptions. The entire itinerary below cost approximately $500 and 25k points per person. Priced out individually, this would have cost over $1,300.

Now that we knew what cities we would be visiting, the only other major question was what hotels would we stay at.  As I mentioned in my introductory post, I have platinum status with Starwood Preferred Guest, and when possible will try to stay at this hotel chain. Some of the major benefits the status entitles me to are:

These benefits come in quite handy when on the road, and alleviate some of the stresses of travelling in a foreign place.

Of the cities we planned to visit, Sydney and Melbourne had the highest hotel prices per night. So award stays there would have the highest value.  SPG also has a benefit where if you book an award stay for 4 nights, the 5th is free. This is effectively a 20% discount on the award rate. So if you have a limited point balance, you’d maximize your points with a 5 night award booking in Sydney. We settled on The Westin Sydney for 64k SPG points (award bookings have no taxes or any other fees whatsoever). That comes out to 12,800 points per night for a hotel with approx $300/night rates – not a bad value.

In Cairns, the Sheraton Mirage Port Douglas has an award rate of 10k points per night. The cash rate for that hotel was about $200/night, so while not as great a value as The Westin Sydney, its not terrible either. Other options in the area didn’t look more or less appealing for the price, so this booking was simply a matter of if we had extra points lying around or not.

In Melbourne, the cash room rates were slightly less than Sydney, and both the Westin Melbourne or Sheraton Melbourne have the same award rates of 12k points per night. Once we finalize our plans for Melbourne, we’ll most likely book one of those.

In Ayers Rock and the Whitsundays, there are no major hotel chains, so we used regular OTAs (online travel agencies) to find the best option there.

Out of 16 possible nights in Australia, if we’re able to use points for 11 of them, that’s a significant savings from paying for hotel expenses out-of-pocket.

I hope this post has allowed you learn about some of the thought process behind planning and booking travel – both paid and award travel. The main idea is to maximize the value and benefits of what you have, while minimizing costs and hassles. This will help you enjoy your vacation, and target your spending on where you’ll get the most happiness.