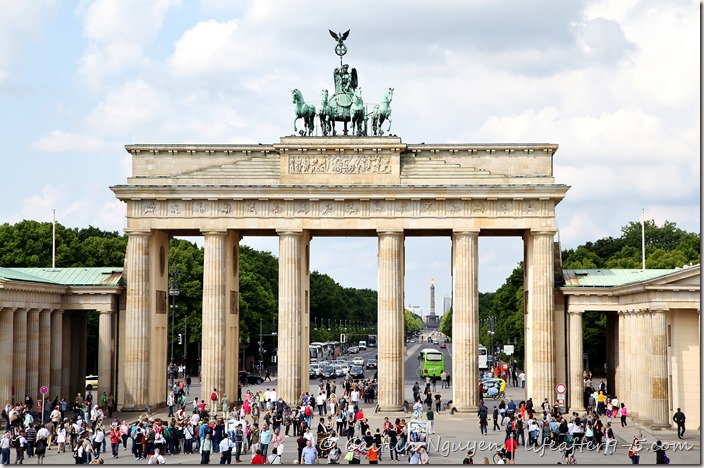 The best way to explore a new city is always on foot.  Based on prior trips to Europe, I knew that Sandemans offers great walking tours.  So while in Berlin, we made it a point to reserve a spot on their FREE city tour.  The tour is the perfect introduction to Berlin and helps you orient yourself to navigate the city.  The tour is offered in English and Spanish at four different times daily, each one lasting about 2.5 hours. A lot of people sign up, so make sure you book in advance to ensure a space.  On our tour, about 100 people showed up and we were quickly divided into smaller groups of 20-30.

Our tour guide, Leen is a Brit who lived in Berlin for about 7 years.  She is an art major and was very knowledgeable and passionate about about the history of the city. She had a great sense of humor and many anecdotes about each location we visited. The stories were entertaining and made the 2.5 hour walk fly by. Here are some highlights of our walking tour: 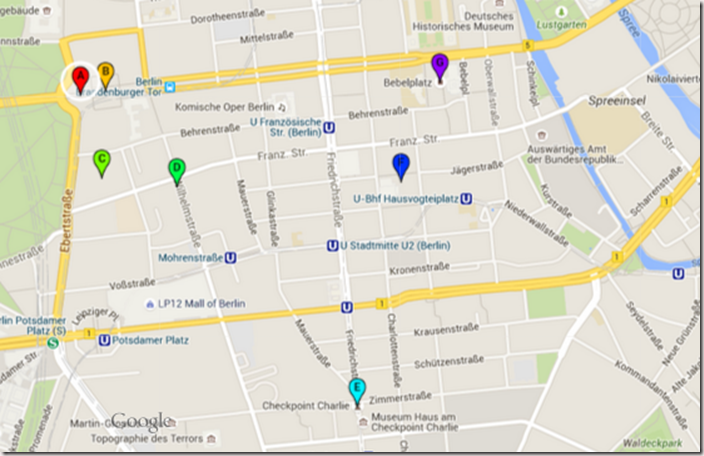 In 18th century, Berlin was a walled city, and to get in people had to enter through one of the 17 gates. One of the best-known landmarks of Germany, the Brandenburg gate, was used as the royal entrance. Atop the neoclassical triumphal arch gate is the quadriga, a chariot drawn by four horses, carrying Eirene, the goddess of peace.  When Napoleon conquered the city in 1806, he took a liking to the statue and took it back to the museum in Paris. Only after Napoleon was defeated, were they able to bring back the statue and restore it to its rightful place. Eirene was changed to Victoria, the goddess of victory and the olive wreath was subsequently replaced with an iron cross.

Now the Brandenburg Gate is closed to traffic, and much of Pariser Platz has been turned into a cobblestone pedestrian walkway. 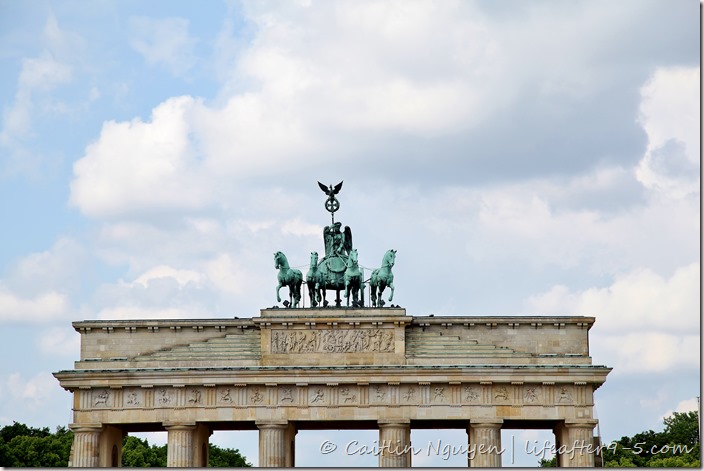 One of the main focal points of Berlin, Pariser Platz, is a square located right underneath the Brandenburg gate. The square is named after the France’s capital, Paris, a tongue-in-cheek nod to Napoleon’s occupation of Berlin. Victoria, the statue above the gate looks down upon the square where the French embassy is located, so that Berlin will always have victory looking over Paris .

On the other corner of the square, is the Hotel Adlon, the place where Michael Jackson famously dangled his child. 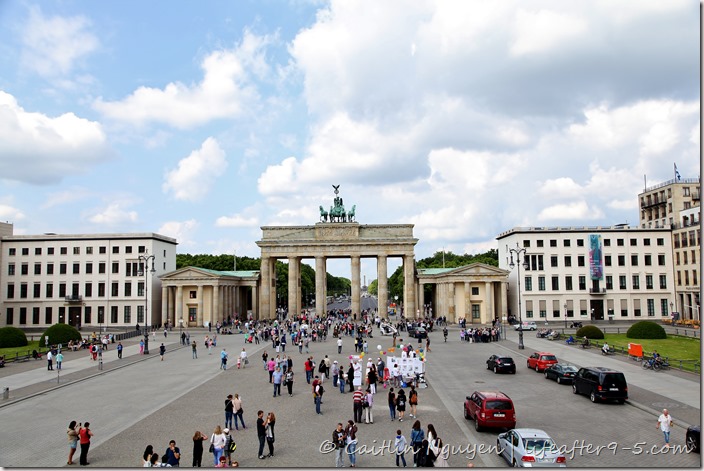 C. Memorial to the Murdered Jews of Europe

The Memorial to the Murdered Jews of Europe located in the heart of Berlin is the German Holocaust Memorial honoring and remembering the six million Jewish victims of the Holocaust. The Memorial is a 4.7 acre site covered with 2,711 concrete blocks, or stelae, arranged in grid pattern.   Looking at the rows and rows of concrete, people have often associated them with different sized tombs or the concentration camps. 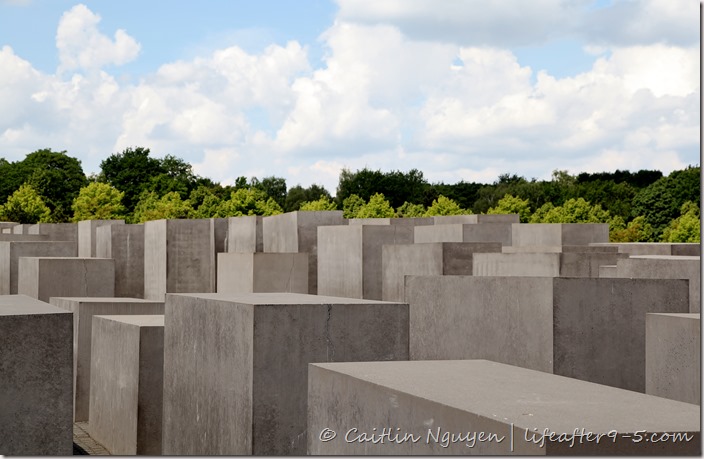 The field of stelae are all different sizes and angles, creating a chaotic feeling when you are standing in the midst of it.  As I walked down the sloping path, the blocks rose high above my head; some standing over 15 feet high, creating an intense feeling of isolation.  Even though there are so many people around, I felt an overwhelming sense of loneliness and claustrophobia.  These blocks evoke different feelings from different people, but ultimately, it makes people stop and reflect on the horrific history that had passed.

Note: Be respectful and don’t stand on the blocks. 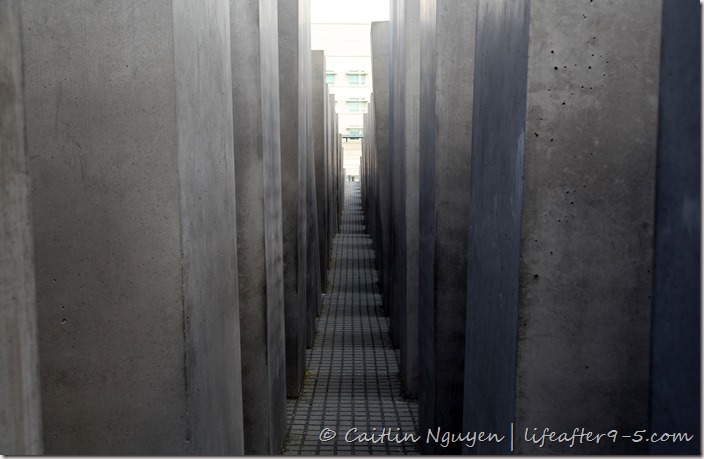 We walked by a nondescript car park surrounded by apartment buildings.  This site used to house Hitler’s bunkers and was the last of Fuhrer Headquarters during the Second World War. The Führerbunker was an air-raid shelter and part of a massive subterranean complex.  Hitler took residence here with his wife Ava during the last part of the war. When he received news of  defeat, he committed suicide here. His body was later exhumed, burned, and dumped into a river.

In the city where he once held supreme power, there is nothing left of him but an empty car park.  There is some symbolism there somewhere. 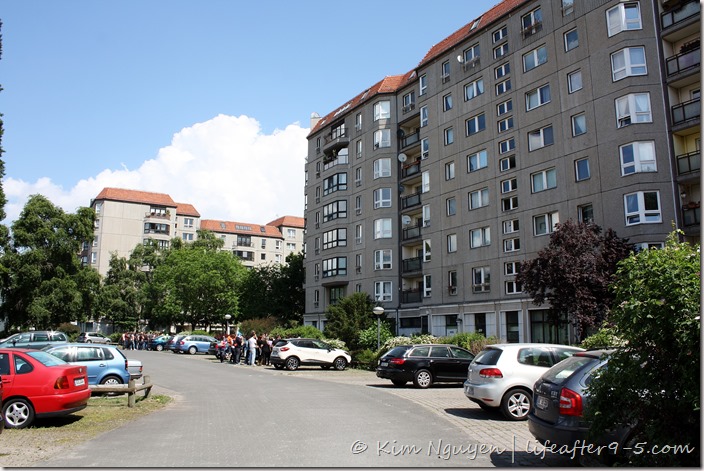 Checkpoint Charlie (or “Checkpoint C”) was the name given by the Western Allies to the third and best-known crossing point between East and West Berlin during the Cold War.  For three decades, communist-controlled East Germany was cut off from West Berlin by a barrier of concrete, barbed wire, and heavily armed guards. Between the east and west walls, was a death strip filled with nails and sand, and surrounded by watch towers to discourage people from escaping.  However, people still managed to sneak through the check points by ingenious methods like sewing themselves into car seats or hiding in the gas tank of a tiny Trabant.  One family even tried to zip line across the death strip. 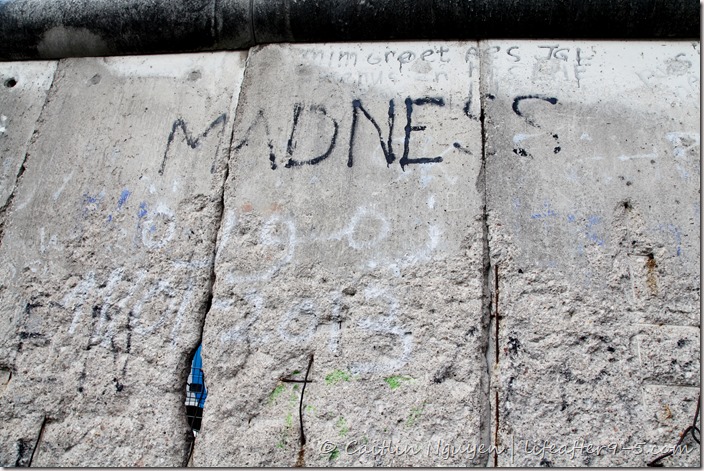 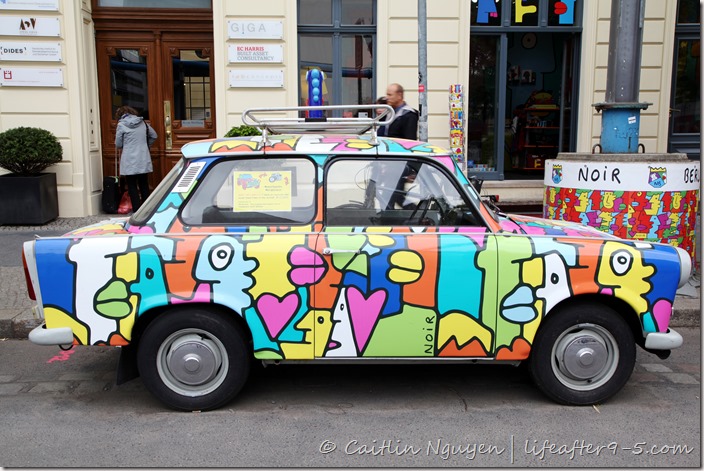 After the reunification of Germany, the building at Checkpoint Charlie became a tourist attraction. 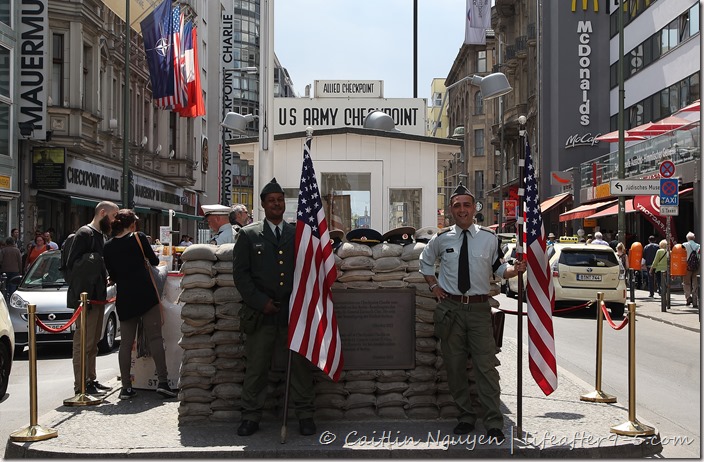 The Gendarmenmarkt is arguably Berlin’s most magnificent square. It is best known for the impressive architectural buildings including Schinkel’s Konzerthaus (concert hall), flanked by German and French cathedrals. The ‘domes’ refer to the domed tower structures erected in 1785 to add stature and grandeur to the two cathedrals. The square dates back to 1700, when the French Protestants or Huguenots were prosecuted and driven out of France.  They were granted asylum in the Prussian capital and settled in Friedrickstadt, an emerging quarter of Berlin.

In the center of the square stands a statue of Germany’s renowned poet Friedrich Schiller. People visited this airy open space to appreciate the architecture, and lingered to listen to the street musicians playing a familiar piece of classical music in the square. 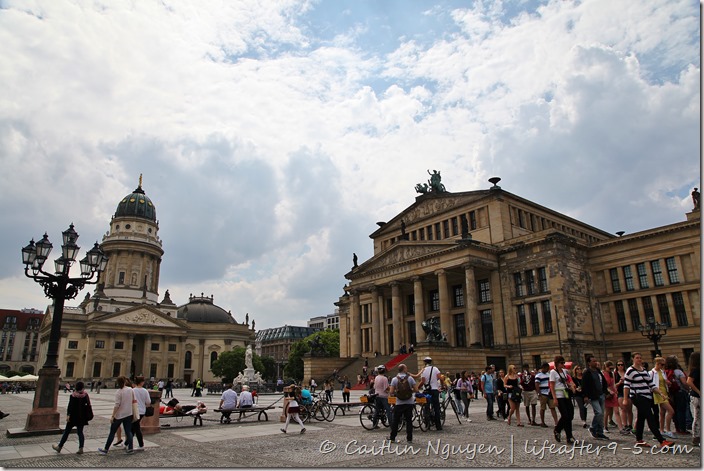 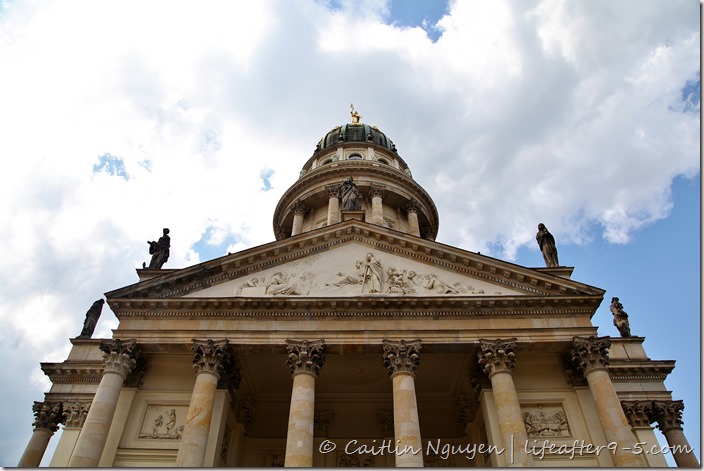 The Babelplatz is the site of the Nazi book burning and cultural cleanse of 1933 in which 20,000 titles were burned, many irreplaceable original first editions. The works by journalists, writers, scientists, and philosophers seen as a threat to the Nazi ideology were taken from the university library and fed into the bonfires.  Today, this travesty is signified and memorialized by a subterranean library filled with empty book cases. The empty white shelves are supposed to hold the 20,000 books that were forever destroyed. The room is off-limits to the public, but you can see it through a little window in the ground. 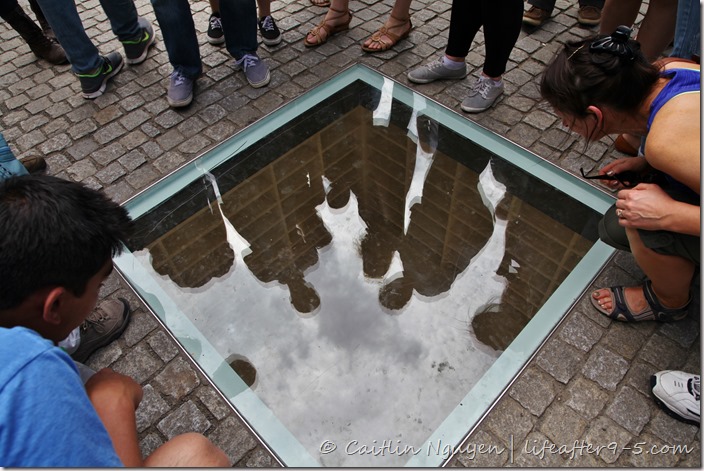 Beside the window are two bronze plaques, including an ominous quote from one of the books that was burned:

That was only a prelude, there
where they burn books,
they burn in the end people.
–Heinrich Heine 1820

The tour was a great introduction to Berlin.  We learned a little bit about the city and were completely entertained the whole time. Our guide brought history to life at each location. You can probably follow the map provided above and visit all these sites by yourself, but why bother when you can join a group and hopefully make some new friends. If you enjoyed the tour, don’t forget to tip the tour guide appropriately at the end, that’s how they make their living.