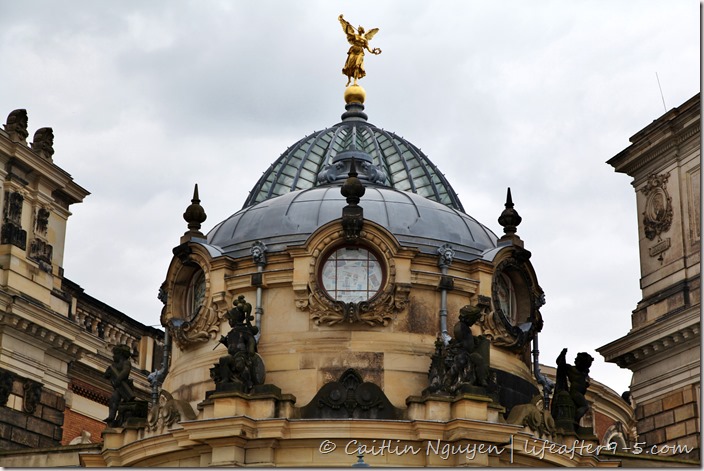 On our way to Prague, we took a small detour and spent a few hours in Dresden. Stepping out of the train, we could see that it was going to be a dreary day and we were clearly not dressed warm enough since the sky was overcast and threatening to rain. I was sick like a dog, fighting a cold that I had since our first day in Europe and couldn’t seem to shake off, so our first stop was the pharmacia to see if we could get some good ole German medication. Through some stilted communication on my part, the pharmacist suggested some lozenges which were supposed to help me sing. I don’t know about singing, I’d settle for just talking.

Dresden was the capital of old Saxony.  It was home to many Saxon princes and kings for hundreds of years, the most famous of them being August der Starke (Augustus the Strong), whose kingdom included Poland. But it is best known for the controversial blitz attack by Allied forces in 1945 when the entire city center was razed to the ground, killing over 25,000 people.  Dresden had weathered the war, and since then many of the destroyed buildings have been painstakingly reconstructed and restored to their former glory: the Zwinger was rebuilt in 1964, the Semper Opera house in 1985, and most famous landmark of Dresden, the Frauenkirche was completed in 2005. Today, the city has regained much of its original charm, and hosts over 10 million tourists a year. 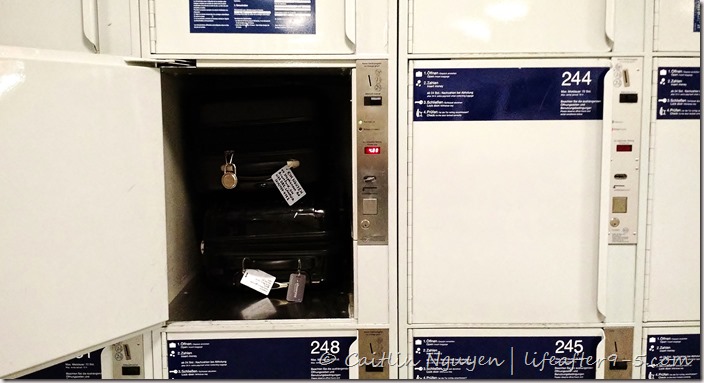 The idea of lugging our stuff around in the cold was not too appealing, so we decided to put our bags into lockers conveniently located right near gate 1-4.  There are a variety of locker sizes, the bigger ones can fit 2 medium-sized luggage and cost only 4 Euro. At the central train station, there is plenty of useful information for tourists. We snatched a free map  of the city and began our exploration of Dresden by walking down Pragerstrasse, the city’s longest shopping district. The walk from the train station to the historic town center takes about 10 minutes going straight north.  The city center along the River Elbe should be explored on foot in order to fully appreciate the beautiful baroque and rococo style buildings. Here is a self-guided walking map along with a short description of the places we’ve visited: 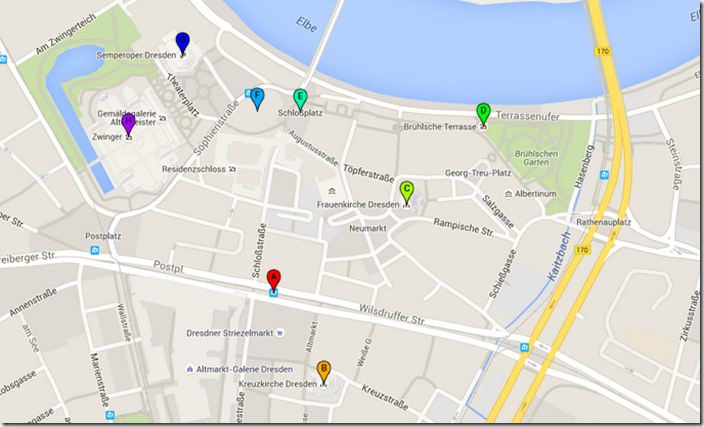 A. Altmarkt –  Altmarkt or Old Market Square is the oldest square in Dresden.  It is also the first square you’ll see walking from the train station.  There are a variety of shops and cafes in the area, so we opted to grab a quick lunch at Café Central. The food was not memorable, but it did give us a chance to charge our phones and figure out where to go next.

B. Kreuzkirche – A block away from the Old Market Square is where you’ll find Dresden’s first church, built in 1215.  This Church of the Cross is home to the world renown Dresdner Kreuzchor (Boys’ Choir), one of the best in Europe. It also has a 92 meter tall tower that is open to the public where you can get a 360 degree view of the city. After lunch, we walked over to the Kreuzkirche and climbed up to the roof where we got a nice view of the red roofs of Dresden.

Cost: €2 admission to the tower

C. Frauenkirche – You’ll find the city’s most famous church in Neumarkt, a new market area created after the first expansion of the city.  Frauenkirche is the heart and soul of Dresden. The 310 foot tall Church of Our Lady was reduced to rubble from the Allied bombing in 1945. The church sat in ruins for decades as a painful reminder of the consequences of war. In 1992, the rebuilding effort started supported by the international community. Like a massive jigsaw puzzle, the church was painstakingly reassembled, using the original bricks of the church whenever possible.  The reconstruction finally finished in 2005 and was once again opened to the public. Today, the church stand tall with its shining golden cupola, donated from the UK, as a symbol of peace and reconciliation amongst the nations of the world.

D. Brühl’s Terrace – Right by the water, you’ll find Bruhl’s terrace, a long terrace stretching along the Elbe.  It is considered the “Balcony of Europe”, a name coined by Goethe, the famous German writer. It was created to be a fortress wall for the city, and when that was unnecessary it became a promenade ground for Dresden’s High Society. Here you can stroll beneath a leafy canopy of linden trees or sit on one of the wooden benches underneath a romantic light post – the view overlooking the river is magnificent. 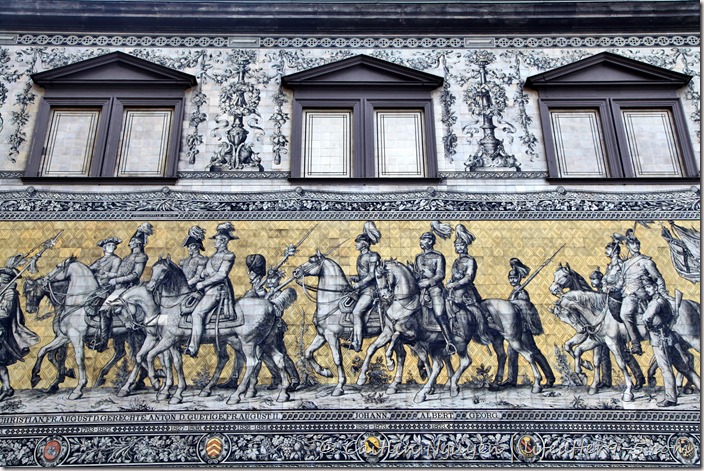 E.  Fürstenzug— At the end of the terrace, we took a left turn onto Augustusstrasse  to find the “Procession of Princes”, the world’s largest porcelain mural painted on 23,000 tiles. It portrays the 35 Saxonian princes, counts, and kings from the House of Wettin on their horses. The level of detail is incredible showing not only the “princes,’’ but also their coat of arms, knights, and animals in a parade across the wall. This is one of the few things that survived the 1945 bombing. 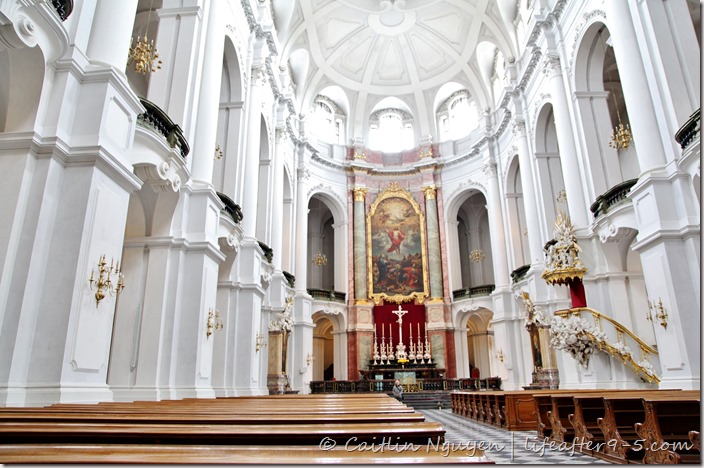 F. Katholische Hofkirche – After walking around the terrace we were both frozen to the bone.  Looking up, we saw this impressive building with its massive 10 foot tall statues adorning the top walls beckoning to us. It turns out it was a Roman Catholic church.  The exterior of the church is quite dramatic, with its high tower and 78 statues of holy figures on the balustrades. Surprisingly, the interior done in all white, is quite plain compared to the Frauenkirche. The one elaborate feature of the church is the ornate pulpit, topped by the famous altar painting by Raphael Anton Mengs and the organ by Gottfried Silbermann. We sat down and let the powerful organ music wash over us and warm us up.

G. Semperoper – Crossing the Theaterplatz, you’ll notice the stunning quadriga on top of the roof of the opera house. The impressive baroque building is home to state ballet recitals and a concert hall.  Famous composers such as Wagner and Strauss have both debuted their important works here, and stars like Vaslav Nijinsky have graced its stage.  Unfortunately, the timing was not right for us to join the tour groups or to see a ballet, so we only got to admire it from afar.

H. Zwinger – Our last stop of the day was the Zwinger palace, one of the most famous landmarks in Dresden.  Built in the Rococo style, this palace is one of the most beautiful buildings you’ll see in Dresden or perhaps even Germany.  It is not sprawling like other European palaces, but a more manageable size. Walking through the courtyard, we were struck by the spacious and beautifully manicured grounds.  Our attention was drawn to the fanciful architecture, fountains, and sculptures that exist harmoniously in the cloister.  In addition to the grounds, the palace currently house the Old Masters’ picture gallery and the porcelain museum.  My favorite part was the Nymphaeum garden in the back, where it felt like you’re walking amongst the nymphs and cupids in a forest of sculptures.

Cost: Free to explore the grounds of Zwinger

One day is probably too short to see all of Dresden. However, the historical area is not very big and can be explored on foot in a few hours. We really enjoyed our time here, even though the weather was grey and cold. The whole time, we were in awe of this beautiful city – especially considering that it was reduced to rubble at the end of World War II. Our day ended with an exciting rush to catch the train.  There was a last minute gate change and we almost missed our ride, but luckily, we were seated with 3 minutes to spare.

Cost: €62.60 one way, train from Berlin to Prague with stopover in Dresden

2 thoughts on “A Day in Dresden”