In the modern age, technology and innovation has made it easy for the casual traveler to easily explore the four corners of the world.  It also means that there are very few places left undiscovered.  Even though it’s the status quo now, it was not always the case a few hundred years ago.  It’s hard for people to imagine a world other than the one they were born into.  Before the Age of Discovery, people would look out from the cliffs into the boundless ocean and believe that it was the end of the world.  The famous Portuguese  explorers changed that preconception, venturing out to Asia and Africa, leading the way for discoveries of a whole different world. 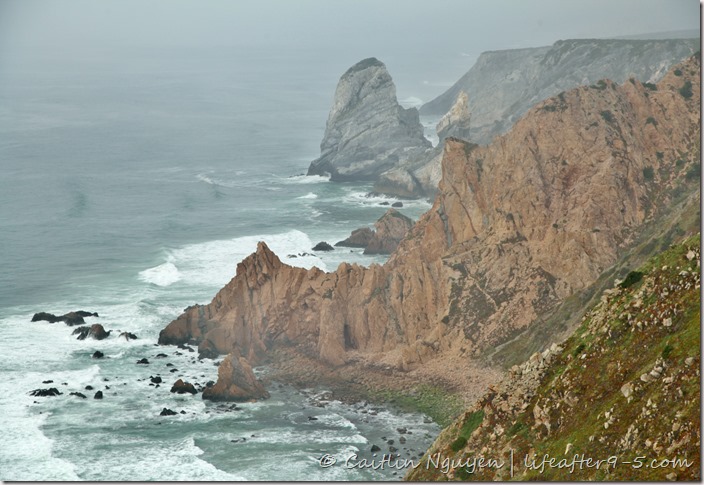 I fell in love with the rugged Portuguese coast line.  Standing at the same precipice today, looking out at the vast ocean, I could feel the same uncertainty and excitement that the explorers must have felt before heading out. There is a wild beauty that can only be found where the land meets the sea, something that you can’t replicate anywhere else.  The following are photos from our visit to the edge of the world: 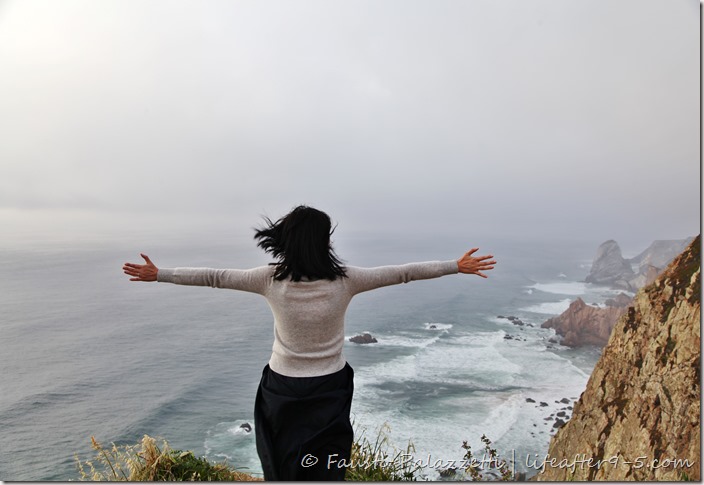 Cabo da Roca is a massive cliff with a steep drop to the Atlantic ocean, forming the westernmost point of Portugal and continental Europe.  The wild and rugged headland was believed by many to be the edge of the world for many years.  There is not much around except land, sea and a 19th century lighthouse that stands out starkly against the desolate landscape.  Visitors are attracted to this dramatic scenery that is a result of thousands of years of turbulence.

Cabo da Roca is about a 30 minute drive from Sintra or Cascais.  You can take the 403 bus from the Sintra train station which leaves every hour and costs a few Euro.  Driving is another option, but keep in mind the road is quite narrow and full of switchbacks.  There is no entrance fee or parking charges at the cape. 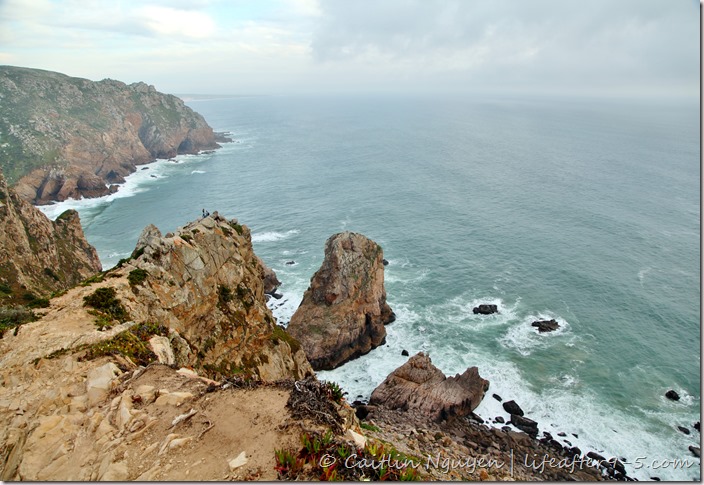 From the top, the view of the raging Atlantic Ocean pounding into the jagged cliffs are spectacular. There are several footpaths leading downward to the coast, but they are quite challenging. The best time to visit is during sunset, unfortunately when we were there, the fog and clouds limited visibility. 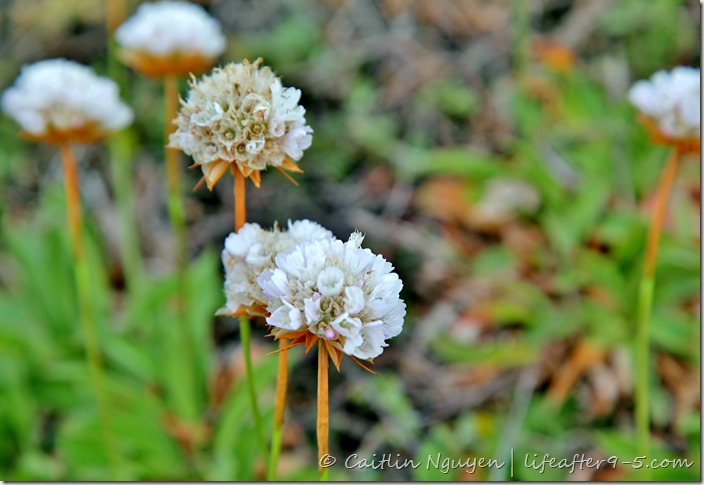 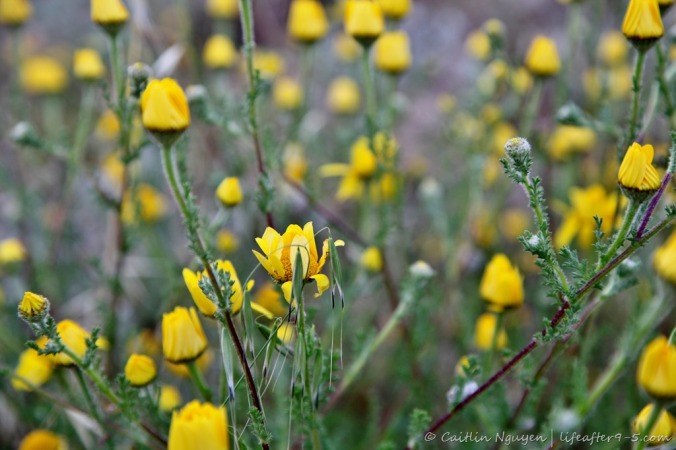 All along the ridge, there are fields of sweet grass and  wild flowers. It’s amazing that these delicate flowers thrived in this environment. The salty sea air mingled with the sweet nectar of the flowers, creating a smell that’s pure and fresh.

Tip: It is very windy at the cliff edge, even during the summer months.  Be sure to bring extra layers so you don’t get cold. 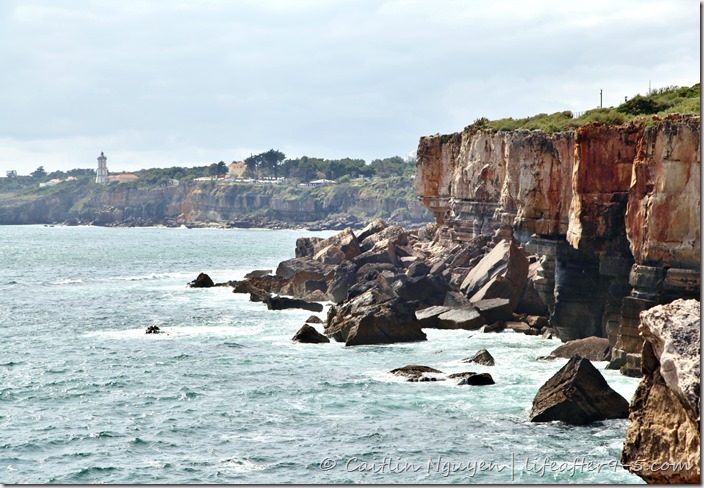 A little further down the coast toward the popular seaside town of Cascais, is another interesting cliff with an ominous sounding name. Boca de Inferno (translated to Devil’s Mouth) is natural phenomenon that caused by thousands of years of strong currents and high waves relentlessly beating against the rock face.  The ceaseless pounding wore down the cliff, creating a small cave that eventually collapsed to form an archway leading to a small bay. 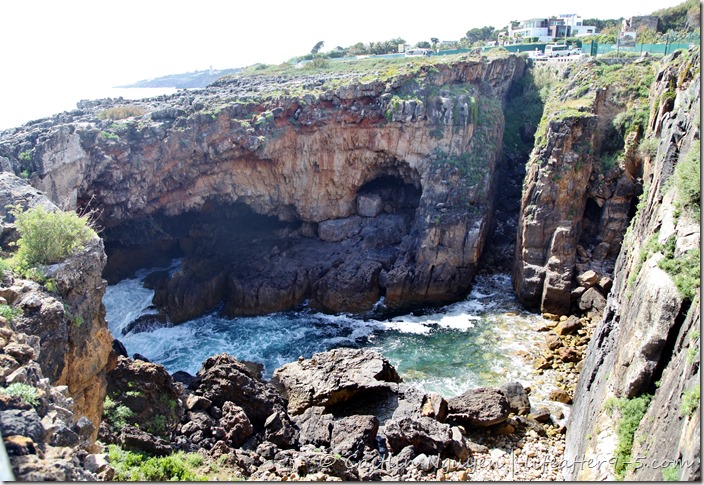 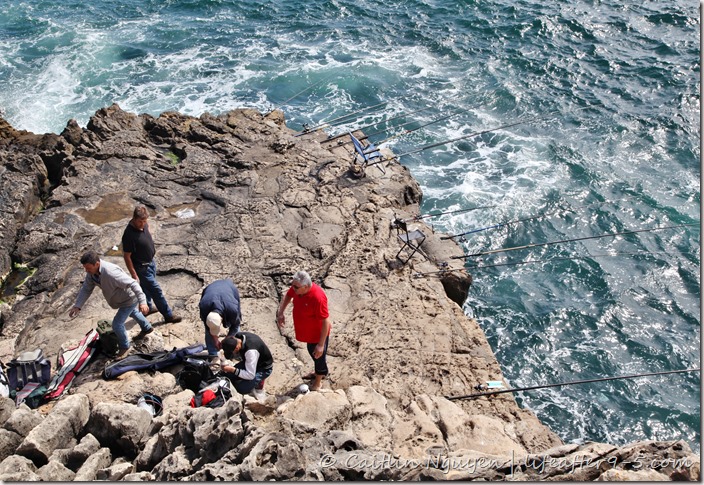 At the Devil’s Mouth are several pathways leading downward, allowing visitors to see the unique formation from both sides. On the weekend, you can see the locals sitting at the bottom of the cliff, braving the strong wind with their fishing poles.