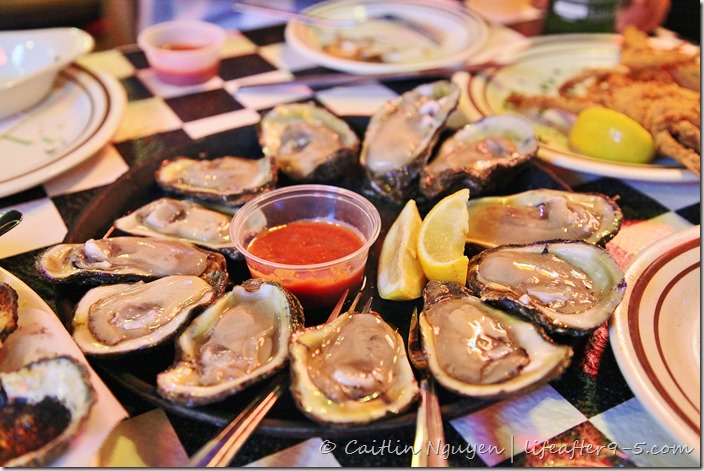 Where do I start?  It was our first time in Louisiana and we made the most of it by hitting up local eateries and trying out some authentic Southern fare.  It’s safe to say that there is no city quite like New Orleans and it’s food is a reflection of that. The dishes are a mix of traditional Southern style heavily influenced by French and Cajun flavors. Their use of ingredients indigenous to the area really makes eating in New Orleans a unique experience. We ate at upscale and hole-in-the-wall places to get a feel for all the different food that The Big Easy has to offer.  Here are the highlights of all the food we tried: 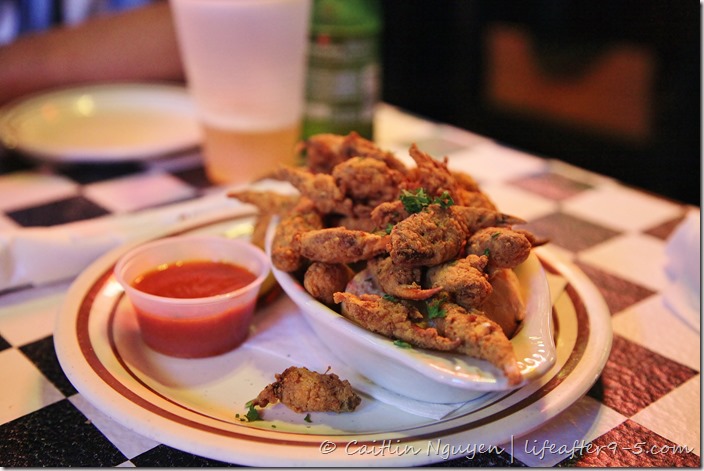 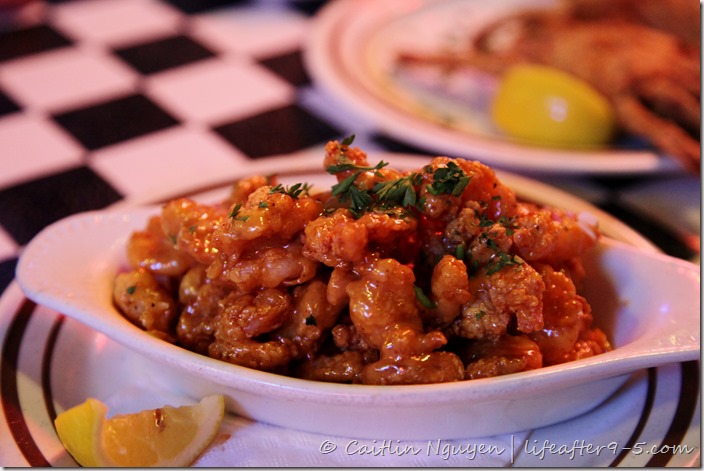 Seafood – In the French Quarter, you can’t throw a stone without hitting a seafood restaurant. I was looking forward to the seafood, but was disappointed to find that most of it is fried including fried crab claws, fried soft shell crabs, fried oysters, and fried shrimp. Basically they will fry anything that moves. The preparation was too heavy and the shellfish was smothered under all the grease. I prefer my fresh seafood to be cooked simply and lightly where the ingredient can shine through.

Also, due to the timing of the visit, we didn’t get to do a crawfish boil because we were there during the wrong season. 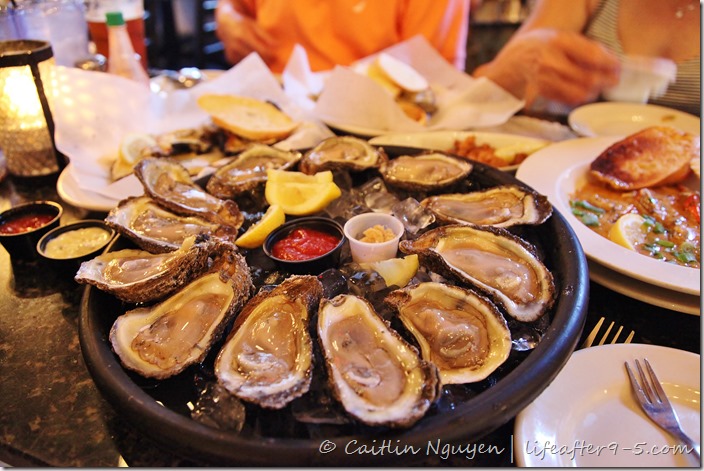 Oysters on the half shell at Royal House

Oysters –  The people in New Orleans love their oysters and it’s not hard to tell why. The Gulf oysters are large and succulent but not overly briny. Every seafood restaurant has a guy out at the front of the bar shucking oysters as fast as you can eat them. Most places sell oysters 2 ways, on the half shell or grilled.  Grilled oysters are char grilled and covered with Parmesan cheese. Personally, I like my oysters raw, but almost everyone else seems to preferred the grilled variety. Based on recommendations and Yelp reviews, I tried the oysters at Acme, Royal House and Felix. They were all good quality and cost about $1.20 per oyster if you order a dozen.  My favorite was the first round of oysters at Felix’s. It was so good I ordered a second round, however, the oysters that came out after were much smaller. Even though I was disappointed, I still prefer Felix’s. Overall, I think you can skip the hype and the line at Acme and get your oyster fix at one of the other restaurants. 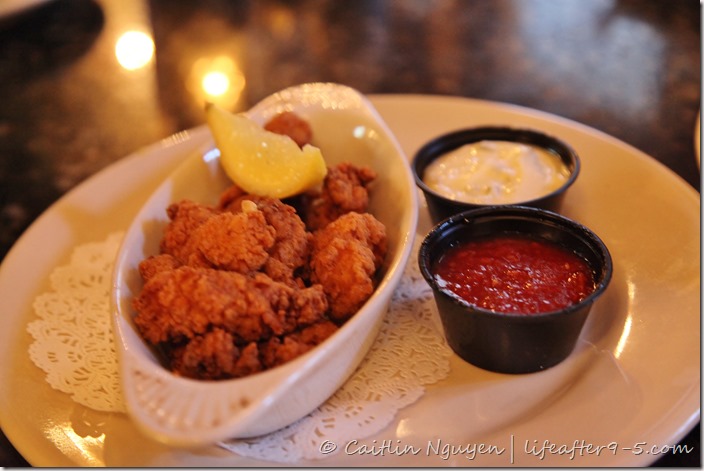 Alligator – When down in the Bayou, I had to get myself some alligator. Luckily we didn’t have to go out and catch one ourselves, plenty of restaurants offer this protein on their menu – it is a staple food option in Louisiana. We had fried alligator at Royal House and blackened alligator at Felix’s. I didn’t know what to expect, but both versions were delicious. The meat was lean and tastes like a more chewy version of chicken (cliché I know). In fact, it was so delicious, we got a box to go. Snacking on gator. 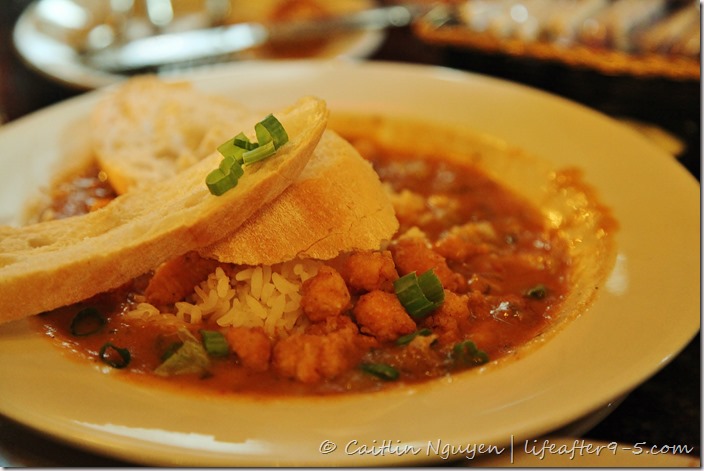 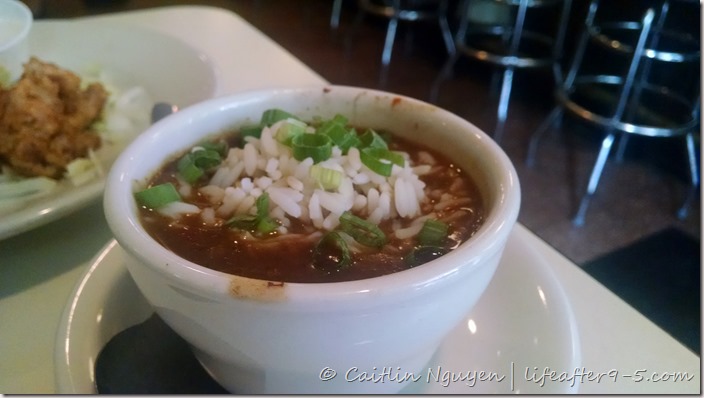 Southern Food – After watching the Top Chef – New Orleans season, I was excited to try authentic Southern food. We had high expectations for August, John Besh’s restaurant, but unfortunately the food was mediocre. Fausto and I had the five course chef tasting menu and my parents ordered a-la-cart. The soft shell crab and truffle gnocchi dishes from the a-la-cart menu were vibrant and delightful for the taste buds but the food from the degustation menu was an overcooked mess.  The flavors was contrived and did not remind me of French or Southern cuisine.

Aside from the food at August, we also tried other traditional Southern fare.  My favorite was the crawfish etouffee and the shrimp and grits at Royal House. It was the first time I tried both dishes and they were surprisingly light and tasty. The Cajun shrimp balanced out the creaminess of the grits. The crawfish etouffee, a local specialty, was a rich build up of Croele flavoring yet tastes lighter than a gumbo.

This was my first time trying a lot of the distinctive dishes local to this region and I found myself liking them a lot more than I thought. The food is bold and full of flavors. It is also very rich and eating this on a daily basis would not be good for my waist line. 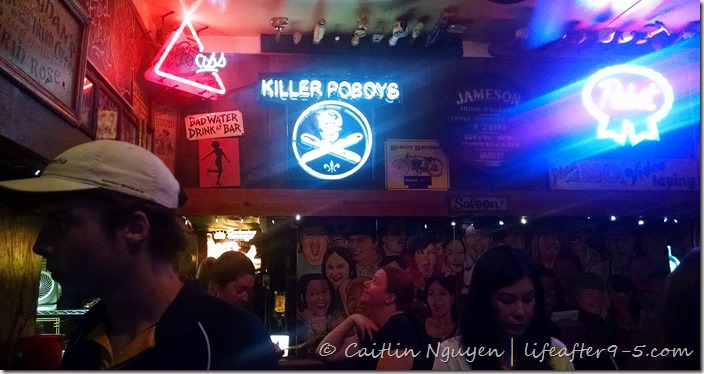 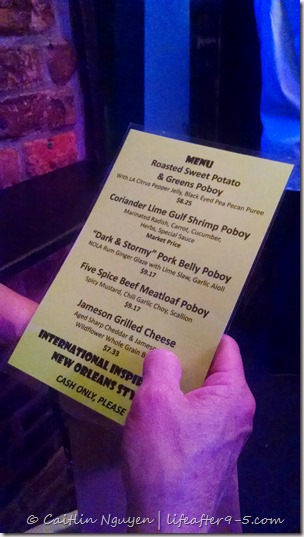 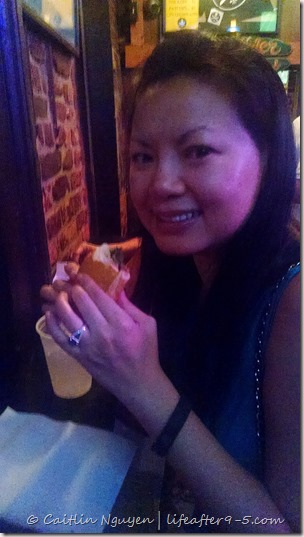 Po’ Boys – Everywhere you go in New Orleans, you’ll run into a place offering po’ boys. It’s a traditional sub sandwich consisting of crusty bread that is light on the inside and stuffed full of meat or fried seafood. The humble po’ boys are served in places ranging from little holes-in-the-wall to fancy restaurants, depending on your mood and preference. My favorite was the Dark and Stormy ($9.17) served at the Killer Poboys. The sandwich is filled with tender ginger glazed pork belly and garlic aoili and finished with lime slaw that perfectly balanced out the richness. This small shop right off of Bourbon street in the back of a dive bar is the perfect place to go to grab your po’boy fix, especially after a late night of drinking. Make sure you tell the bouncer at the front that you’re there for the sandwich. 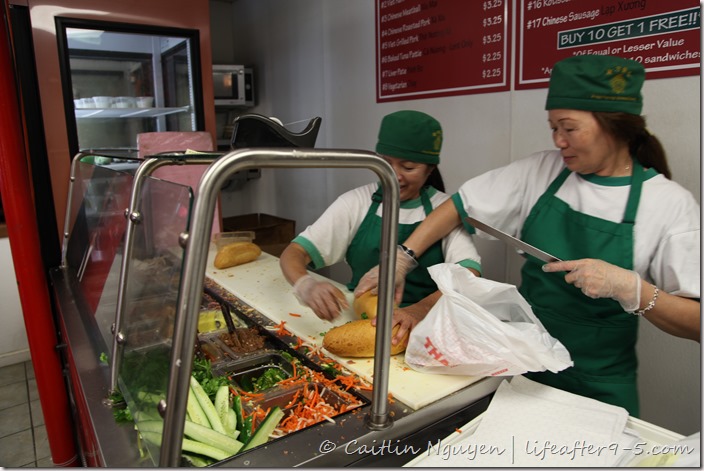 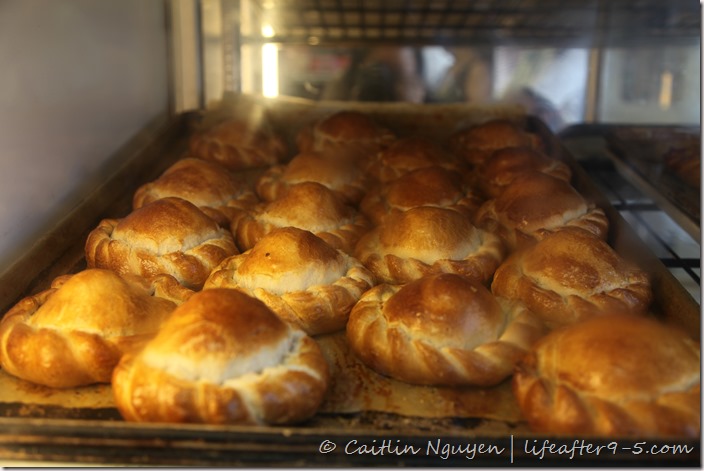 Louisiana, being near the Gulf with a large fishing/shrimping industry, has attracted a lot of Vietnamese people to its state over the years.  So when we were there, we wanted to make sure that we tried Vietnamese food to compare with what we had up North. One of the quintessential and most recognizable Viet foods is the banh mi, also known as the Vietnamese Po’ Boy in the New Orleans.  On our way back from the swamp, we made a little detour over to Dong Phuong, a bakery on the outskirts of town. They have a large menu ranging from traditional cold cut banh mi to meatball banh mi, each costing about $3.25 to $4.25, a good price considering the size.  In addition, there are other baked goods sold in the store. Everything we had was authentic, flavorful and definitely made us wish that we live closer.

Beignet – It’s almost mandatory that you try the beignet, a local specialty, when you’re in New Orleans. The best place to try this delectable sweet treat is at Café du Monde, beloved by locals and tourists alike.  The main location is right in the middle of the French Quarter, across from Jackson Square.  A beignet, a golden fried donut sprinkled with powdered sugar, is addicting especially if you dip them into a nice cup of chicory coffee. The first time we tried it, we weren’t thinking and bought the fritters to go. By the time we got back to the hotel, they were hard and dense, not a great first experience. If you insist on ordering to go, then don’t go too far, walk across the street and have your beignet on the bench in Jackson square as you do some people watching. 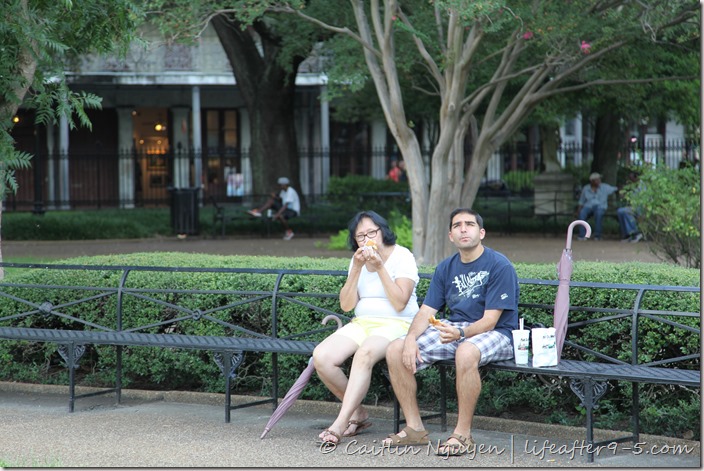 Eating beignets in the park

The second time we came back, we got a table out on the porch area, and order some beignets and coffee to eat in and this time the pastry did not disappoint. Freshly made, they were warm and crispy on the outside, we were in fried dough heaven. We loved it so much, we bought a box of beignet mix and a can of coffee to go so we can recreate the experience at home.

You know you had a good trip when you came back and gained 5 pounds in a few days. The local cuisine was interesting and memorable and not like anything we’ve tasted anywhere else. We got to try new dishes and proteins that we don’t often see in other parts of the country.  There was a few misses, but overall it was a great experience.

One thought on “Eating in New Orleans”