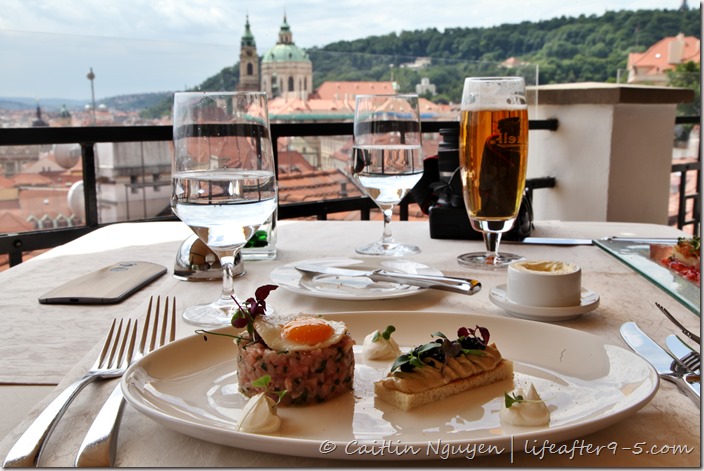 Many people are drawn to Prague for its incredible history, magnificent spires, and old-world charm, but you don’t often hear about Czech cuisine.   There are a lot of great eating options in this beautiful city: from traditional fares, to home-cooked staples, to tempting street food; there is a deep-rooted culinary tradition inspired by classic dishes from the nearby countries of Germany, Poland, and Austria.  Prague’s classic dish is usually a large platter of meat (did I mention that there are A LOT of meat?), bread, sauerkraut, and of course beer to wash it all down.  Luckily, their world-famous golden lager is usually cheaper than water. Whether you’re dining on the street or on a hill terrace, the food remains highly affordable by North American standards. Here are a few places to eat in Prague:

Sausage in the Square  – The first thing we noticed were the hoard of tourists in the Old Town Square congregating under the clock tower.  The second thing we noticed were all the meat stands throughout the square selling Prague ham and Balkasa sausage.  The slabs of meat were grilled over charcoal, giving it a slight smoky taste.  The sausage was nice and juicy because it was so fatty.  Of course we couldn’t resist all the beer and meat. Our first meal in Prague was eaten sitting down on the sidewalk. It was a very interesting experience and we felt like street urchins. The lunch for the two of us including a beer was $12 USD. 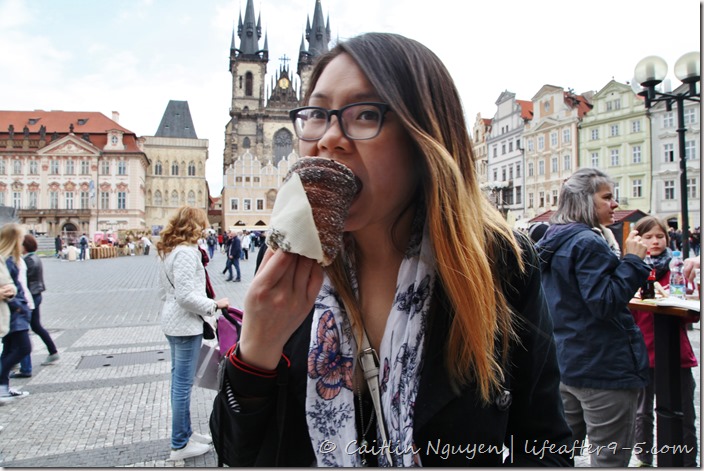 Sweet Pastry Snacks – Walking around, we couldn’t help but notice everyone eating a curious looking pastry.  This traditional Czech pastry, Trdelnik, is made from rolled dough that is wrapped around a stick, then grilled over charcoal and then topped with a sugar and walnut mix. It smells amazing, but tasted a bit dry. 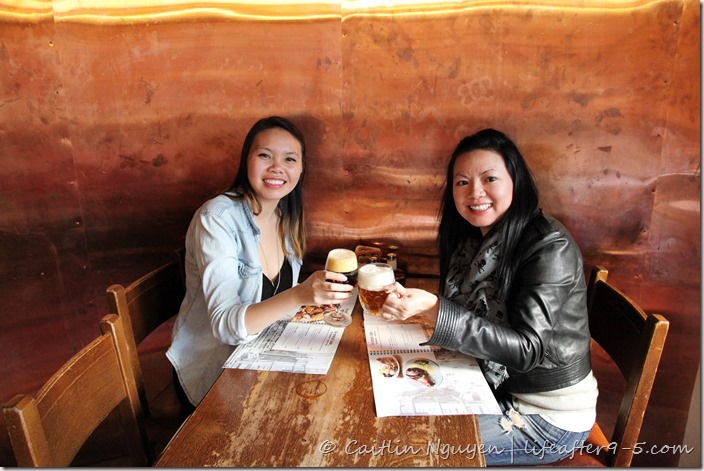 Pub Food at U Medvidku- For our first dinner in Prague, we went for the tried and true favorite local pub with a menu full of beer and delicious grub. This restaurant has been around for hundreds of years.  The beer hall was massive, but since we were non-smokers we got seated in a tiny little room. We went for the traditional pork knee, which was enormous; one portion was enough for at least 2 people. The meat was so tender it fell right off the bone. The roasted skin was slightly crispy, creating a nice contrast to the juicy meat. We also tried a few of the locally brewed beers.  One of the sweet dark beers had the highest alcohol content in the world clocking in at 12.5%.  Dinner for 2 including a few beers came to $33 USD. 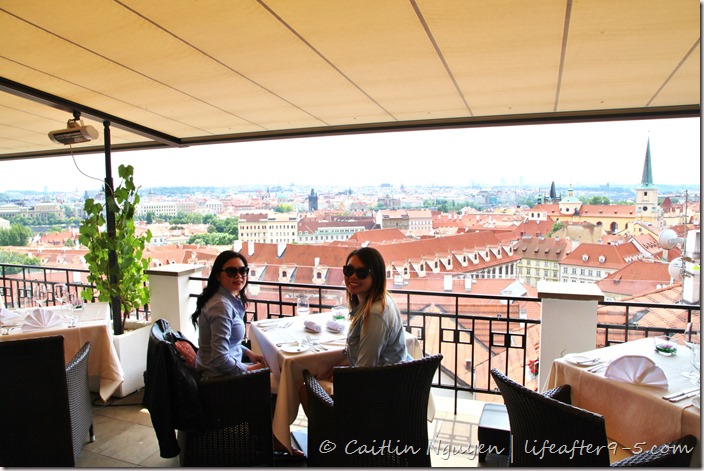 Fancy Meal at Teresa – Kim was in charge of planning our food on this trip and I have to admit, she hit the jackpot with Teresa.  Hidden away at the top of a hill, this place has the best view of the city of Prague.  From this vantage point we could see Mala Strana and the Old Town below.  We came for lunch, when it was still nice and quiet and had the whole terrace to ourselves.

The view was quickly forgotten as the food came out.  We started off with a terrine amuse bouche that stimulated our taste buds with promises of great food to come. For our first course, I got the veal tartar with creme fraiche, quail egg, and caviar toast. The texture of the tartar was nice, each piece was perfectly cut into tiny uniform cubes; after watching many cooking shows, I was impressed by the knife skills. Kim had the grilled scallop with champagne jelly cubes and strawberry carpaccio. The salt crust scallop was balanced by the balsamic strawberry and champagne. The dish was light and refreshing and with tastes that reminded you of a nice summer afternoon.

For the main, we had the signature steak and fois gras. After having a taste, I realized it’s the signature dish for a reason because it was perfection. With the risk of sounding overly exaggerated, I want to say that the sauce elicited the kind of pleasure I didn’t realize I could feel when I eat.  I wanted to immerse myself in a vat of this sauce and slowly eat myself to death. The fois gras was fatty and plump and slightly fried. The potato was velvety and creamy, nicely complimented by the crisp veggies and grilled tomatoes that burst with flavor. The beef was tender and juicy.  The flavors and textures were well balanced.  Each component was amazing on its own, but together, the whole dish was flawless. This was the best meat dish I had on the trip and rivaling the fish dish in Berlin as the best dish over all. 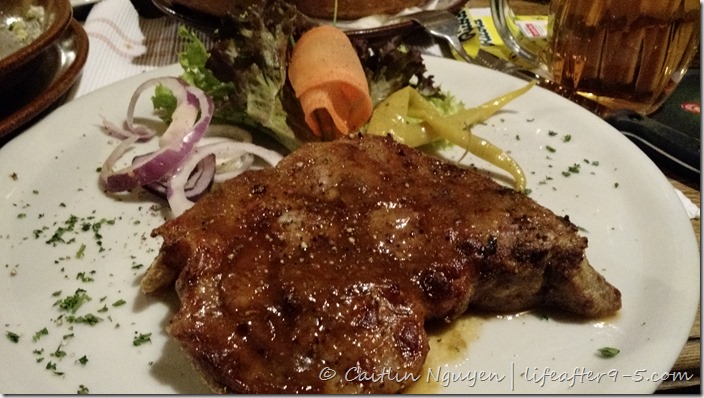 Homecooking at Restaurace Mlejnice – This quiet restaurant has an atmosphere of a 19th century farm house with its low lighting and antique farm equipment casually strewn throughout the room.  It invoked a sense of homeliness, like you dropped by grandma’s house for a nice bit of home cooking.  Despite being located in a back alley, it is quite popular and the place was packed. We ordered the cabbage soup, beer goulash, creamy potatoes and pork neck. It’s probably too much food for two girls, but that’s how we roll. The savory cabbage soup topped with a bit of sour cream has surprising depth of flavor. The pork neck is soft and practically melted in your mouth.  It is probably the most tender piece of pork I’ve ever had. Everything else including the goulash was a bit salty for my taste.

People Watching at U Prince – We walked by U Prince a few times, going to and from the clock tower.  It always looked busy and inviting with it’s outdoor seating and heat lamps.  Located right in the heart of the Old Town Square, this is the prime location to people watch.   Unfortunately, the food was mediocre.  While we were hungry and waiting for our food, we had a piece of stale bread that was brought to the table, only to later find out that we were charged 25 CZK (which is about a dollar) for each piece. This is the epitome of a tourist trap. If you enjoy the lively atmosphere, I would recommend only stopping here for a drink, before going to elsewhere for dinner.

Asian Food at Zebra Express – We came across this Thai restaurant with a funny name near Powder Tower and had to give it a try. Surprisingly, the food was pretty authentic.  The pad thai was nice and light not drowned in sauce, yet still flavorful. It reminded me of the pad thai I had in Bangkok. If you are looking for a break from the pork knees, this is a good place to get some Thai food. 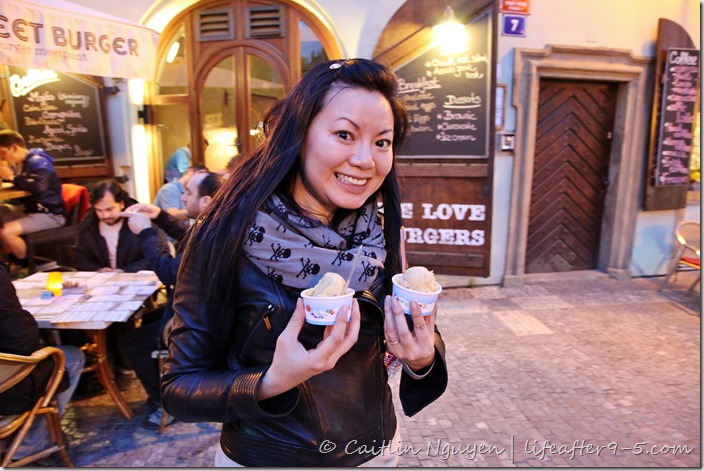 Ice cream at Angelato – The ice cream in Prague was surprisingly good.  While walking back to our hotel one night, we passed by an ice cream stand at the side of the main square and decided to indulge ourselves. This began our love affair with Angelato and for the rest of the time we ended up having 2-3 ice creams a day.  Their reasonably priced ice cream had a smooth and creamy consistency with strong distinctive flavors.  Don’t be fooled by other ice cream stands around Old Town, we know because we made the mistake of trying the other ones and the quality was subpar.

Cannabis products – There are a lot of cannabis products for sale in stores throughout the city.  We were questioning the legality of the products, but since they are so openly advertised and sold in every shop, we figured, why not.  There have everything from weed beer to chips to funky candies.

Know Before You Go:

Overall, the food in Prague was very interesting but a bit heavy. We had a lot of firsts: first time we ate a plate of meat sitting on the side of the street, first time we had roasted pork knees, and first time we tried weed chips.  We ended up having our most memorable meal of the whole trip at Teresa. You usually pay 35-40 dollars for a meal for two at a restaurant and end up eating and drinking pretty well.   The food in Czech Republic was tasty and memorable, what else can you ask for?

5 thoughts on “Eating in Prague”