Have you ever fallen in love with a place before you even got there?   Ever since the first time I saw a picture of Bagan at sunrise, I obsessively scoured Instagram  looking through other people’s photos, dreaming of a time when I would be there myself.  My dream came true last year when I finally got to explore the Burmese plains and took  over 3,000 photos during the 3 days that I was there.  Even the great explorer, Marco Polo was in awe of this place, calling it “one of the finest sights in the world”.

Bagan was the capital of the ancient kingdom of Pagan that flourished between the 11th and 12th century.  This was when over 13,000 Buddhist temples, pagodas, and monasteries were built across the 40 sq km plain.  Some temples are just a thin shell that house a massive golden Buddha statue within, while others were lovingly decorated with frescoes, carvings, and engravings depicting stories of the life of Buddha. Thousands of these temples have been restored and preserved.  Compared to other more frequented UNESCO Heritage Sites, this place is still relatively unsullied. Now with the recent democratic election, the country has opened the floodgates and even more people will be coming to Myanmar, one of Asia’s hot new destinations.

The temples in Old Bagan are close together making it easy to explore the region. The best way to see the area is on an e-bike allowing you to get to more remote places. For the most part we were off-roading, sticking to dirt roads that do not appear on a paper map.  Be careful, the sand on the dirt roads can cause the bike to skid out of control and fall over. I drove into the ditch a few times, giving the locals a nice chuckle at my expense. 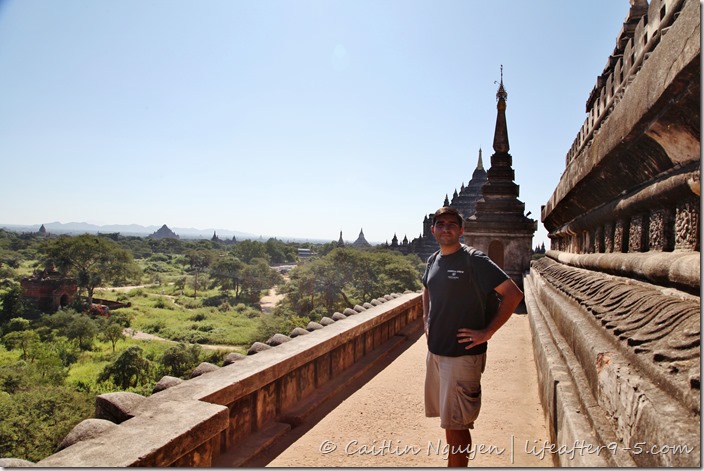 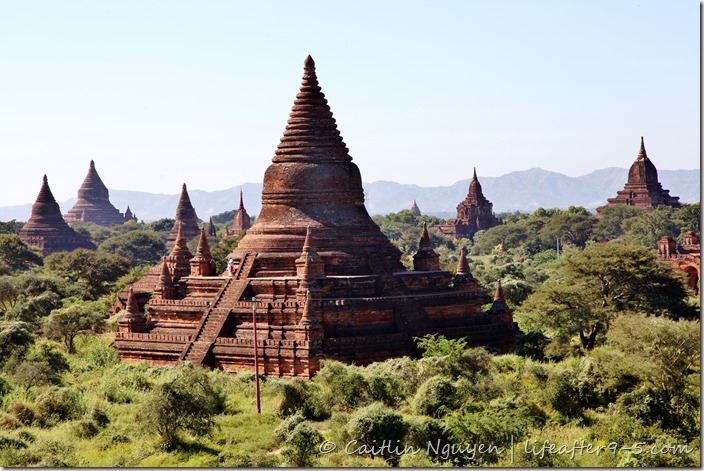 As Bagan becomes popular with travelers around the world, more restrictions are levied on the visitors.  Temple terraces are locked down to prevent people from climbing to the top causing the structure to deteriorate faster.  But that’s part of the charm of the place, the excitement of riding out onto any random road and chancing upon a temple, and if you’re lucky it’ll have a terrace.  On the dirt road between two temples, we found a semi-large temple with no name. There were no vendors here and no other people around except for a few bikes that drove by on their way somewhere else. We climbed up a tiny stair hidden inside a wall to get to the top. The view from the terrace was breathtaking. You can see all the other temples around with their brick stupas peaking through the green canopy. We decided to lie down and take an afternoon siesta, letting the ancient temple shield us from the hot afternoon sun. 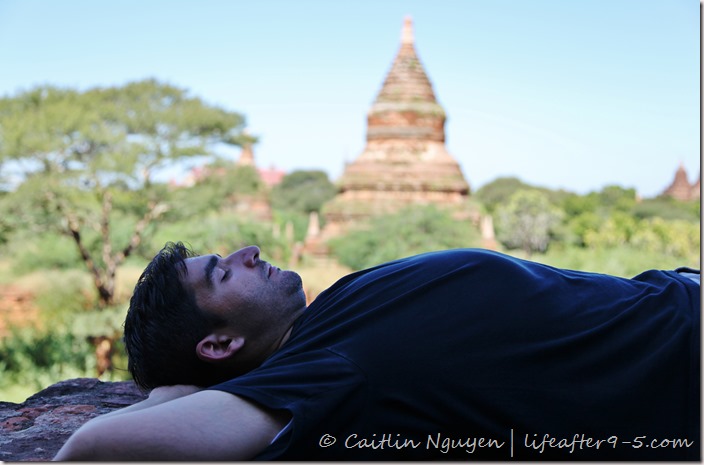 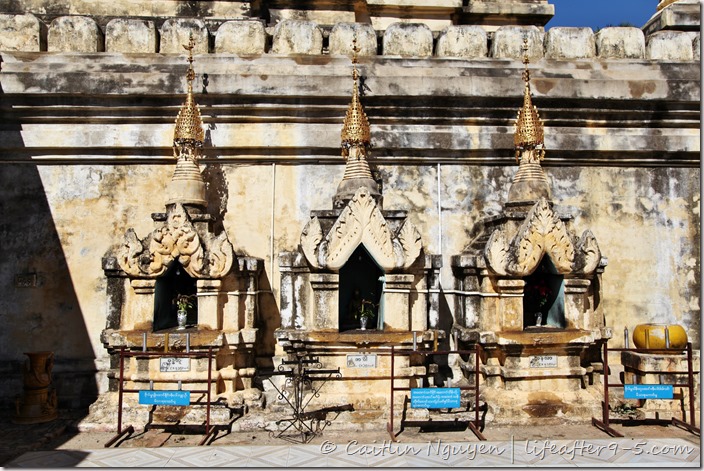 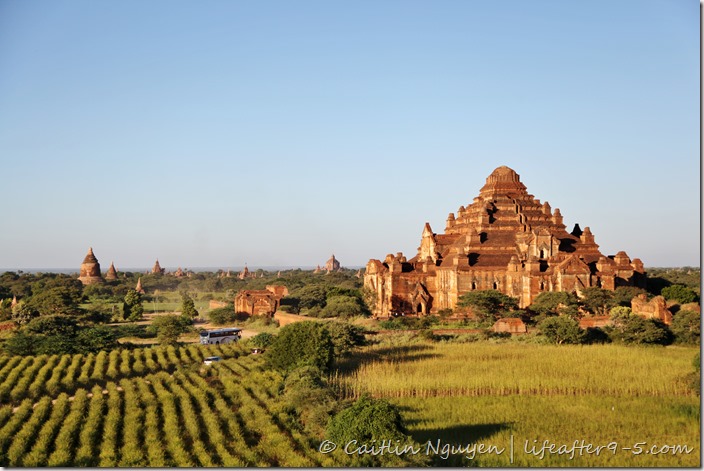 Lying on the brick ledge, we looked up at the cloudless sky and marveled at the magnificence of this place. Even though we were hot and dirty, we would not want to change any part of this experience.  In the distance, I could hear birds chipping, bees buzzing and a very loud rooster. It’s surreal that in the middle of the most visited place in Myanmar, we managed to find a little private corner all to ourselves, just us and the pagodas.

Every temple you go to will usually have hoards of kids selling postcards. They all speak English pretty well, and they all want your money. The thing is, how many postcards can you actually buy?  Vendors are also selling a variety of other souvenirs like wind chimes, bells, puppets, tattoo pens, ceramic pottery, and of course jewelry.   Some of these make a fun souvenir, but for a $4 “jade” bracelet,  I wouldn’t bank on it being real.

Another thing you’ll notice when you visit the many temples of Bagan is the sand paintings laid out on the floor.   These paintings, done by local artists, are replicas of the murals found in the temples.  They are usually created using the sand technique where the subject is sketched onto a piece of cloth, then covered in acrylic glue and finally sprinkled with layers of sand from the Ayeyarwady River.  Once  dried, the artist completes the process by painting the artwork with vibrant colors by hand. The paintings are reasonably priced at US$8-$10, but remember you’ll have to negotiate. 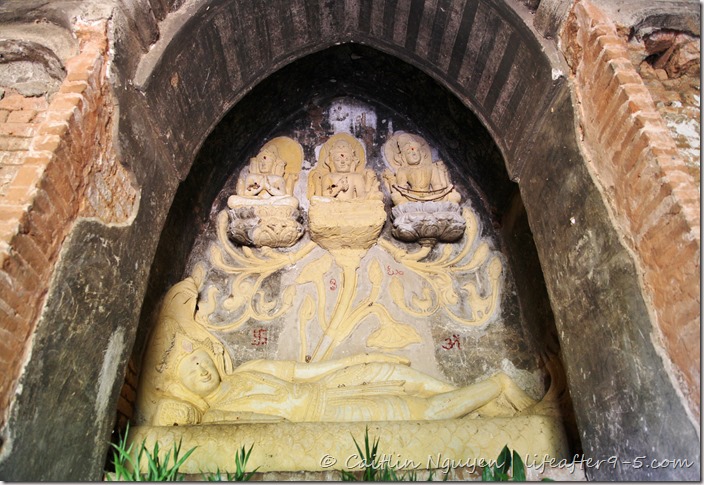 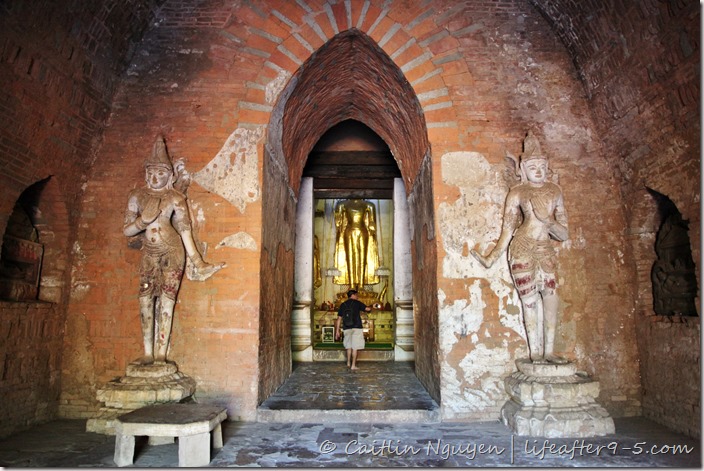 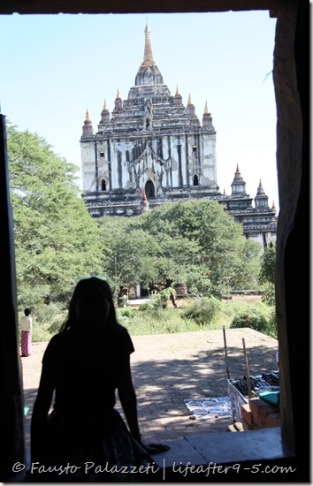 Even though we had some temples mapped out, we kept getting distracted with random ones we saw on the way. We chanced upon  a nice Hindu temple overlooking Thatbyinyu Phaya.  One girl was kind enough to show us around, explaining the history and the meanings of the frescoes.  Her English was impeccable. After showing us around, she took us to her stall where we felt obligated to buy something, even though there was nothing I liked there. We found out after, that they try this trick with every tourist. Now, I am a proud owner of a puppet elephant. 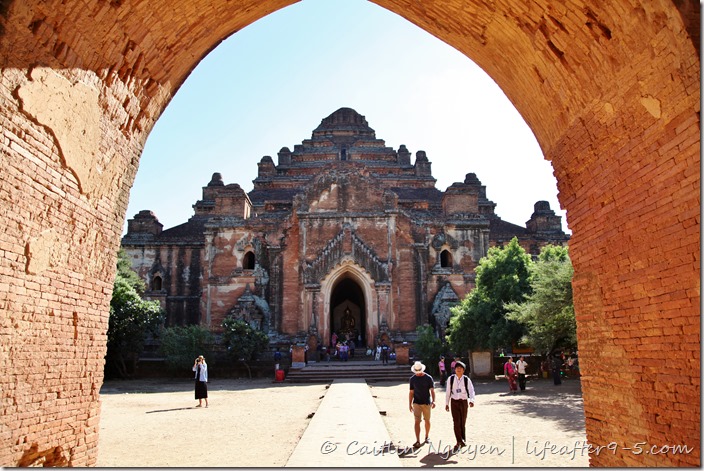 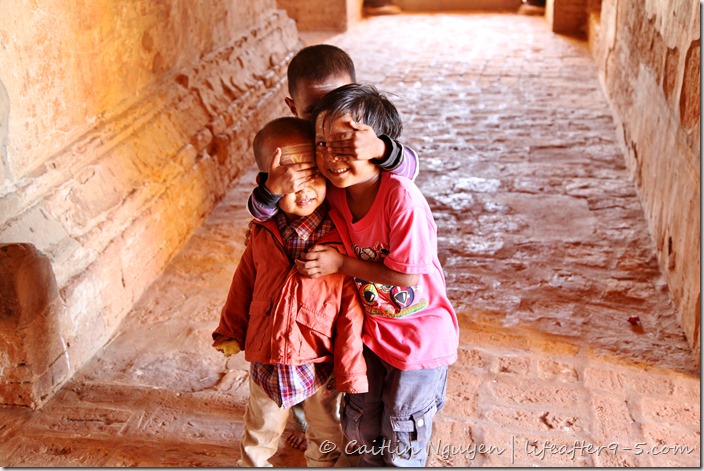 On our last day we visited Dhammayangyi, one of the biggest temples in Bagan. In the back of the temple, we met a family selling sand paintings.  While the parents were busy with their business, the three little kids ran around playing hide and seek within the temple walls.  They were shy at the beginning, but warmed up to me when I showed them how to use the camera.  Life is about the simple pleasures and sometimes it doesn’t take much to make someone happy.

To read more about Bagan, check out my other post. Here are a few more random pictures of temples: 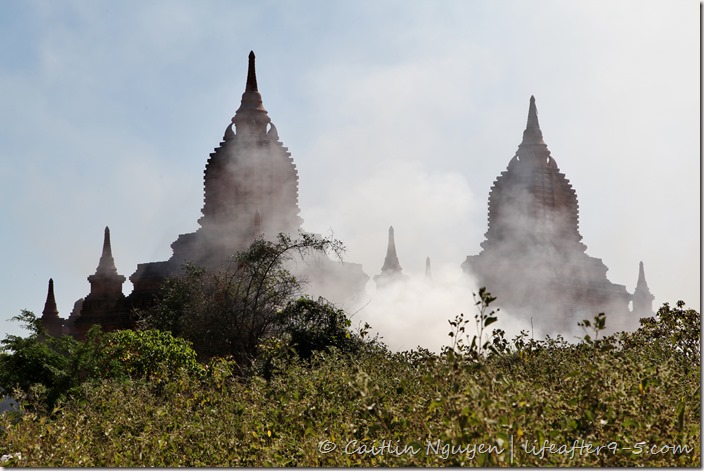 We passed by a temple filled with smoke, one of the things people still do here is burn their garbage. Even though it was suffocating, it created a nice effect for the photo. 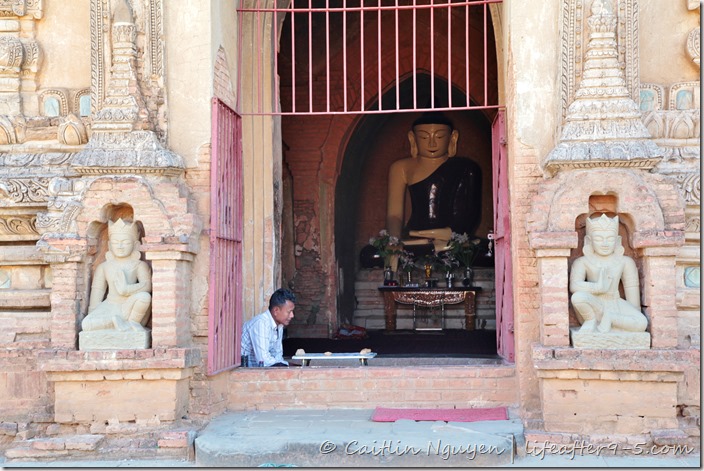 Inside you’ll find four large Buddha statues, each facing out to an entrance. 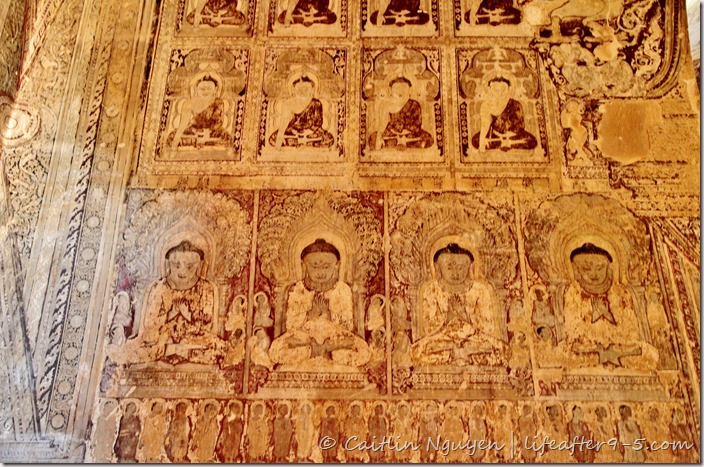 On the wall there are beautifully preserved murals decorated with pictures of Buddha. Some of the phaya don’t allow photography to prevent the wall murals from being over exposed 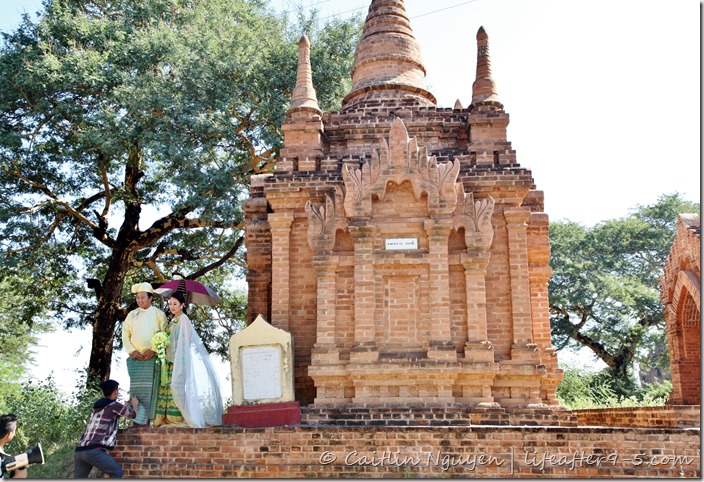 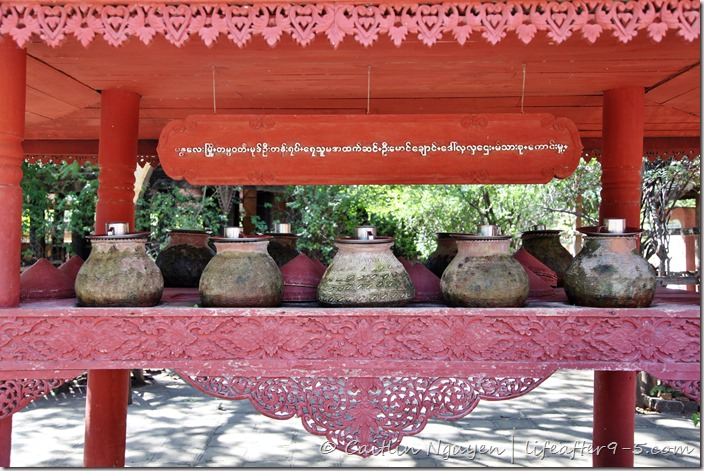 View from Hsinphyushin Monastic Complex, one of the less-frequented structures

2 thoughts on “Bagan in Pictures”