I have to admit, Porto was not high on my list of places to visit. I actually only came based on my sister’s recommendation, but in the end I couldn’t have been happier with that decision. I’ve  traveled to many cities around the world and indiscriminately loved them all, but there are few that hold on to my heart just a little bit longer, and Porto is one of them. It’s not flashy, but it doesn’t need to be and it exudes a quiet old-world charm and laid back vibe that some of the other cities lack.

Porto is a coastal city in northwest Portugal, known for its Port wines. Portugal’s second-largest city comes with all the history and allure of Lisbon but minus the crowds, congestion, and price-gouging.   Not having gained the notoriety of other more well known European cities, it’s not as expensive as Paris or London, and it’s not as filled with tourists as Prague.

The weather forecast for the 3 days that we were in Porto was supposed to be a washout, but thankfully, aside from a few dark clouds and brief showers, the weather was actually pretty nice which allowed us to walk a lot.  Porto is a very walkable city, even with the hills.  The center is crammed with photogenic alleyways, cobblestone streets and pretty balconies filled with flower pots. Everywhere you turn, there are colorful 18th- and 19th-century buildings with their tiled facades.  To take in all the notable sights, I’ve created my own personalized walking tour of the city using Google Maps.  It takes about an hour to follow the path from point A to point H, but don’t be afraid to wander into a few side streets.  There is something to see at every corner.  We spent about 2 days visiting all the sights listed here. Hopefully this will give you an idea of what to do when you’re planning your own trip:

The tall bell tower of the Clérigos church was the tallest structure in Portugal when it was completed at the end of the 18th century.  It was used by ships to navigate into Cais ta Ribeira.  Today it remains a prominent feature of the city’s skyline that can be seen from miles away.

You can pay the small entrance fee to climb the 240 steps up a narrow spiral staircase to the top.  Take a breather along the way and visit the exhibit rooms to learn about the tower’s history.  Once you arrive at the belfry, you will be rewarded an unforgettable panoramic view of Porto.   The sweeping view of the terracotta rooftops stretches all the way to river where you can even see the old port warehouses on the other side.

This bookstore is one of the oldest in Portugal and was rated as one of the best in the world by Lonely Planet a few years ago. But that wasn’t the reason why I wanted to visit this well-known bookstore. Supposedly, this is where J K Rowling spent a lot of her time while she was in Porto teaching English in the 90s.

The first thing you’ll notice when entering the store is the intricate floor-to-ceiling wood shelves filled with books.  Looking up, you’ll see the stunning stained glass ceiling.  Then your eyes are immediately drawn to the center of the room where you’ll find a curved wooden staircase with the steps painted a shocking shade of red. It’s not hard to imagine how this setting can provide inspiration for the Harry Potter books.

Due to high demand, there is a  small entrance fee to enter.  However, the fee will be refunded if you purchase a book.  There are a lot of children’s book in both English and Portuguese, and even with the fee, the place is still very crowded.  Everyone – myself included – was busy taking pictures instead of perusing the books. If you want to spend quiet time browsing books, there are countless other bookstores in the city that are probably better, but if you want to look at the place that inspired the Harry Potter universe, then you’re in the right place.

The graceful twin-towered baroque church stands out proudly at the top of the hill.  Completed in the 18th century, its eye-catching façade is covered in the iconic blue and white azulejo depicting scenes from the life of St Ildefonsus . The stunning tile panels gleam in the bright sunlight.  Unfortunately, we were there while the church was closed, so we were only able to see it from the outside. 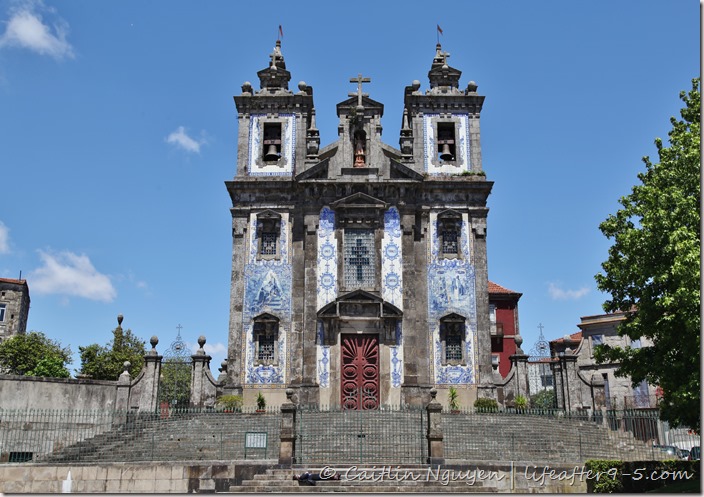 This centrally located wrought-iron market has been around since the 19th century.  It is a great place to buy fresh produce as well as other Portuguese goodies like olive oil, cheese, cured meat, and bread.   There are also lots of stalls selling hand made crafts as souvenirs for much cheaper than what you’d find elsewhere.  A good time to go is on Friday and Saturday morning when the market is at its liveliest.  Some of the food stalls turn into a makeshift restaurant where people can sit on top of an old barrel and sample a selection of local wine and cheeses. 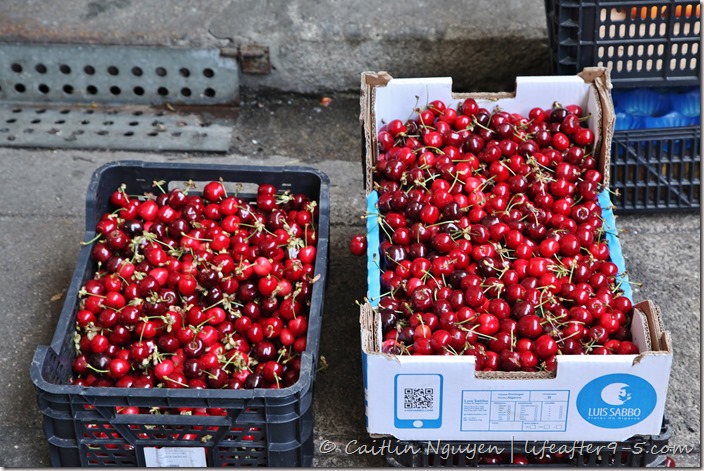 One of the joys of visiting a historic city such as Porto is that you’re rewarded with visually stunning architectural gems, even when you’re just going to a train station.  The São Bento station built on the site of an old Benedictine monastery, is a transportation hub located in the heart of the city. When visitors arrive by train, they are rewarded with the magnificent century-old blue and white ceramic tiles depicting Portugal’s history. The murals on the interior walls consist of 20,000 hand-painted azulejo.

Another worthy stop is at the Palácio de Bolsa, a former stock market,  built in the 19th century to honor the merchants and impress European investors. It was and still remains the headquarters of the Porto Commercial Association.  This is where the most important official and cultural ceremonies in the city are held, hosting many of the world’s leading statesmen.

The palace can only be seen as part of a 45 minute guided tour that takes place in multiple languages. The first room you enter is the glass-domed Halls of Nations where the exchange once operated.  Looking up you can see the coat of arms of all the nations that do business with Portugal.  Going up the massive stone staircase, you will enter various rooms, each with more elaborate parquet wood floor than the last.  The ceiling is no less ornate with its gold etched details and massive chandeliers.  The tour ended in the great ballroom known as the Arabian Hall.  The magnificent room, with its gold-gilded stucco walls filled with complex Neo-Moorish designs was the highlight of the whole building.  The architect strived for an authentic Middle Eastern design that included phrases praising Allah. This unique space was intended to show off the great wealth of the city to its visitors.

Every tour book and website has the 13th century Church of St. Francis on its list of must-visit places in Porto.  At first glance, the ordinary exterior does not seem to  justify the endorsement, but this is the perfect case of “don’t judge a book by its cover”.  Upon entry, you’ll be immediately captivated and distracted by the lavish baroque interior with its ornate gilded carvings .  Everything from the altars to the statues  to the columns are covered in more than 400kg of gold leaf.  One of the most stunning visual depictions is the gilded ‘Tree of Jesse’, showing Jesus’ family tree.

The Church of São Francisco was built in 1244 by Franciscan Friars in dedication to Saint Francis of Assisi.  It started as a modest church that later grew under the patronage of King Ferdinand I.  The main structure of the church remains largely unaltered and is recognized as the most important Gothic cathedrals in the city of Porto.

The 4 Euro admission fee gets you access to the museum, catacombs, as well as the church.  The eerie catacombs were filled with crypts both on the wall and on the floor engraved with well-known names from Porto’s notable families. Photography is not allowed inside the church, but it’s not enforced strictly.

Head towards the river and visit the Ribeira (riverside) district.  This area used to be the center of commerce during the Middle Ages.  The small winding streets all lead towards the water. Along the riverfront, there are brightly painted houses that serve as a backdrop for the bars and restaurants. It’s the perfect place to sit and watch the rabelo boats filled with wine coming into harbor.  Looming above is the magnificent Dom Luis bridge, connecting Porto to Vila Nova de Gaia. 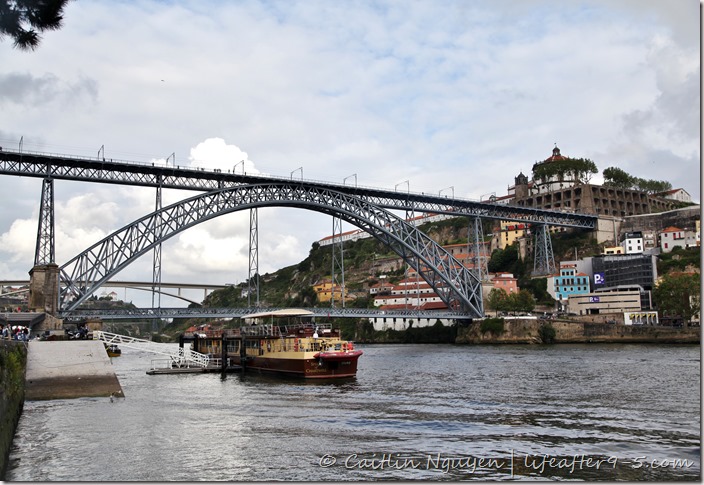 Even though this place is filled with tourists, it’s not a bad place to spend a nice afternoon. The festive atmosphere coupled with the nice setting make this the perfect place for a coffee break.  Although, you’ll want to be prepared to pay the tourist prices here. 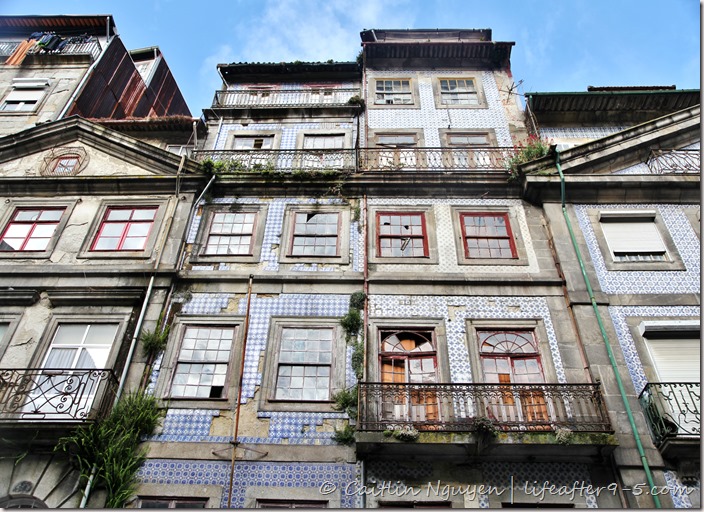