To me, eating is the best way to appreciate and explore a new country and culture.  It is always the favorite part of my trips – and the most memorable.  A good dish is something that I will remember for the rest of my life when memories of the city long fade into the cobwebs of my mind.  Portugal has fast become my favorite European country for food.  As you know, I had a really positive experience eating in Porto and couldn’t wait to try the cuisine in Lisbon.

The food in Lisbon is big on flavor and low on cost, at least compared to the rest of Europe. There are many styles of restaurants in Lisbon, from traditional to modern, and from cervejaria to haute cuisine.  Consistent between the different places is the emphasis on fresh local produce cooked with soul.  Even though we were in Lisbon for only a few days, the places we went to served some of the best food we had.  Here is a short list of our favorite must-eat places in Lisbon:

Restaurante Bonjardim – Located right in the middle of town, in a small alley between Praça dos Restauradores and Rua das Portas de Santo Antão, you’ll find a restaurant serving Portugal’s national dish of piri-piri chicken. Bonjardim is known locally as “Rei dos Frangos” (“King of Chickens“), specializing in spit-roasted chicken.  The salt covered chickens roast slowly on the rotisserie for hours until they’re moist on the inside and crispy on the outside.  The generous portions  are then drizzled with the famous piri-piri sauce – a garlicky crushed chili sauce that brings a nice kick. It’s best eaten with a side of fries and a big glass of beer. The food is cheap and delicious, which is exactly what I love. 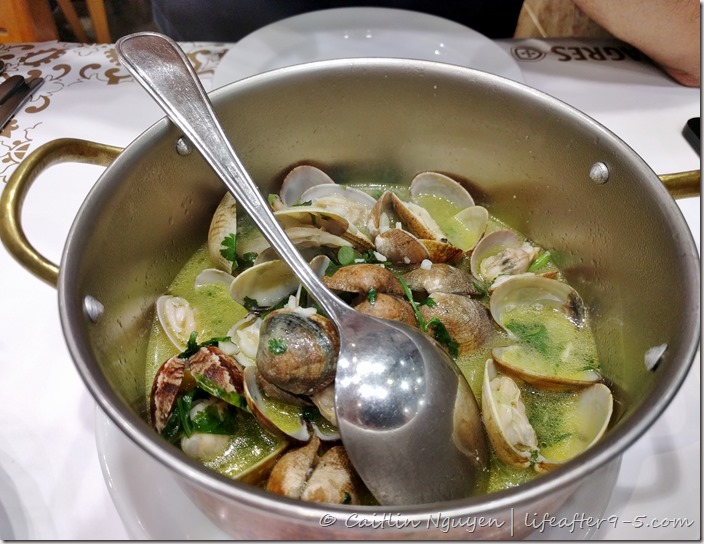 Cervejaria Ramiro –  Cervejaria Ramiro was founded in 1956 and earned its reputation as the best seafood restaurant in town, serving the freshest ingredients in the city. This place is  shellfish heaven with a menu that includes traditional items like crab, lobster, clams, and other more obscure seafood.

This restaurant has gotten even more popular recently after showing up on Anthony Bourdain’s show.  My husband will tell you that I generally stay away from restaurants that Bourdain frequented because I find that they are often over-hyped and under-deliver.  Since this restaurant was also recommended to me by other people, I decided to give it a try, and I am happy to say that this is the exception to the norm. Around dinnertime there is usually a line out the door, but don’t be discouraged, the turnover is quick, so the wait is short.  We were there around 7:30 pm on a Friday night and didn’t have to wait longer than 15-20 minutes.  Once we were seated, the waiter came over with a tablet menu that we used to peruse the selection of the daily catch.  It’s very interactive with lots of pictures and an English option in case you are not familiar with the Portuguese names. The service was attentive without being too intrusive.

Most of the items on the menu are sold by weight. The shellfish is prepared simply, allowing the fresh flavors of the seafood to shine through.  The 1 Euro oysters were plump and creamy. The tiger shrimp was juicy and delectable.  We even got to try a few new items – the spiny dye murex, and the goose neck barnacles.  Eating the barnacles was a very interesting experience, you have to twist and pull off the rubbery neck to get to the pink meat inside, all the while, trying not to squirt everyone else at the table.  My favorite was the spiny dye murex which tasted like a briny snail. All the dishes we ordered were outstanding, in fact it was so good, we got a second order of everything. The whole meal cost us about 70 Euro, including a few beers. If you love seafood, this is the place to be in Lisbon.

Pastéis de Belém – When in Rome Lisbon, one must partake in the flaky Portuguese egg tart, pastel (plural: pasteis) de nata. The sweet treat is made with golden, flaky puff pastry that holds a wobbly, creamy egg custard with a hint of lemon, cinnamon, and vanilla. Once the pastry is baked, the top forms a glossy skin, blistering in some spots.   It is quite small and can be consumed in a few bites. 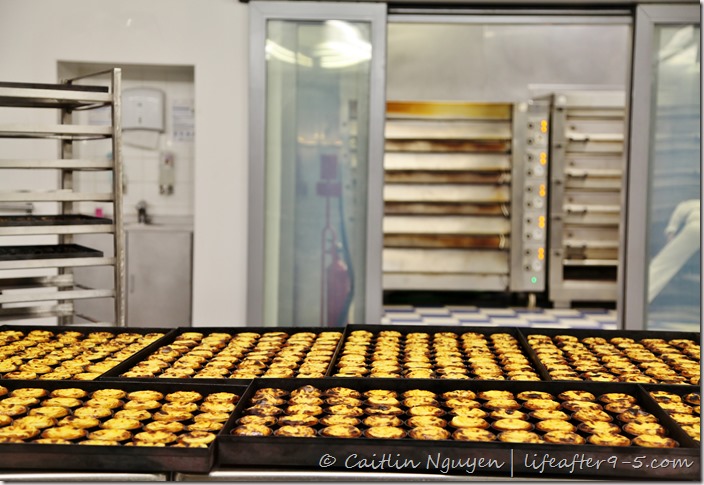 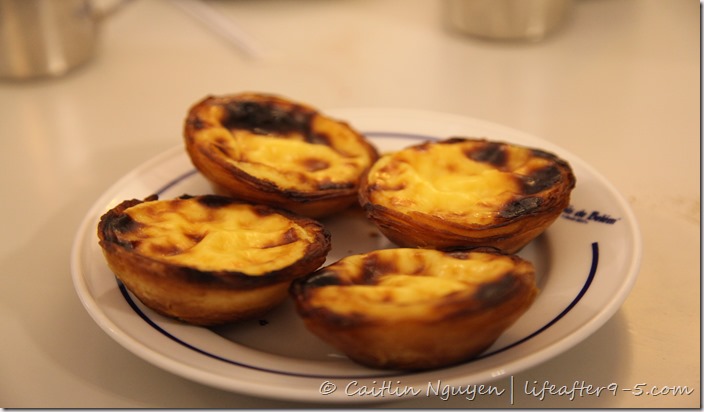 Throughout the country, there are lively debates about which shop makes the best pastel de nata, but everyone can agree that there is no place better than Casa Pasteis De Belem. To understand the significance of this patisserie, we have to look back at the history of the pastry itself, which was believed to be developed  by the Catholic nuns of the Mosteiro do Jeronimos in the 18th century. As was the custom at the time, a large quantity of egg-whites were used by the nuns to starch their clothing, leaving many leftover egg yolks, which became the central ingredient in the Portuguese egg tart. The nuns baked these sweet treats as a method of raising extra funds for the upkeep of the monastery.  The ancient recipe from the convent was handed down to the nearby bakery that opened its door to the public in 1837.  Only a handful of “master confectioners” were ever privy to the secret recipe that has been closely guarded for hundreds of years.  There are countless pastel de nata found everywhere, but only one Pasteis de Belem.  We’ve tasted both the imitations and the real deal, and it’s not even close.  We ate more an  dozen of these tart during our short stay in Lisbon.

Cantinho do Avillez – Cantinho do Avillez is a great little place serving modern Michelin-star quality food. It’s headed by the great Portuguese chef José Avillez.  Located in the chic Chiado area, this place is almost always full for lunch and dinner. Luckily we were there towards the end of lunch service and were able to grab a seat without a reservation. The dining room is relaxed and comfortable while the service was friendly and attentive – the perfect spot for lunch. 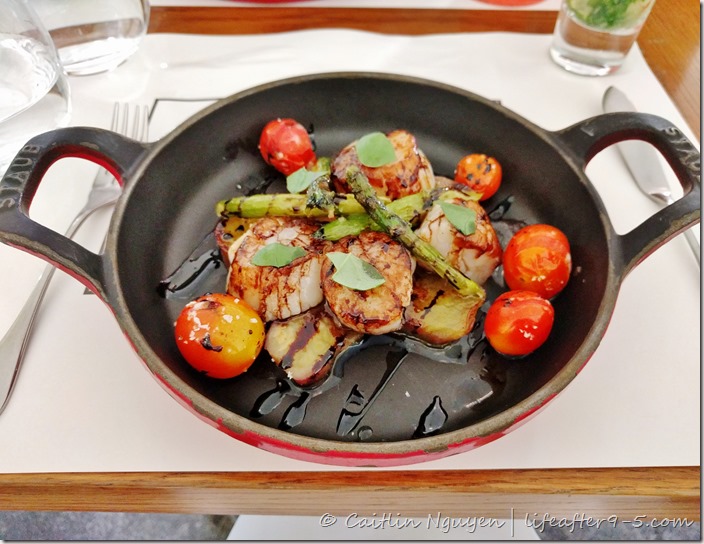 The food is here rooted in traditional Portuguese flavors with some modern twists. For lunch, we ordered the nicely marinated tuna tartar that came with shredded daikon and topped with tiny pearl crackers. The signature steak sandwich on toasted foccacia bread was one of the best that I’ve had.  The tender, melt-in-your-mouth steak creates a nice contrast to the crispy bread. My dish of fried scallops came with grilled tomatoes, asparagus, and soft fluffy potatoes that are both sweet and creamy. Even the non-alcoholic mint pineapple drink was refreshing and tasty.

One thought on “Eating in Lisbon”