You’re probably (maybe) wondering where I’ve been the last two weeks. The answer is quite mundane, work has been all-consuming recently, leaving little time for anything else. Alas, it does pay the bills so I can’t complain. But I am back and I am ready to share about our trip to Asia. Earlier this year we found a cheap ticket to Singapore over Labor Day weekend, the only catch was a 22-hour layover in Tokyo.  Except, this was not so much a problem as an opportunity.  Fast forward 9 months later and here we are.  We’d been to Tokyo before, also on another short mileage run.  We loved the city every time we’re here, and lament the fact that we have to leave so soon.  Next trip to Japan will have to be longer, but for now, we will have to make the most of our time here.

We landed in Japan at 10 pm local time. The plan was to check into our hotel, get a few hours of sleep and wake up early enough to get to the Tsukiji fish market in time for the auction.  We were going to follow it up with breakfast at Sushidai, a small 13-seat restaurant in the market serving the best sushi. Even with the 4 hour long wait, it was still worth it.  Unfortunately, as we were checking in, we found out that the fish market and all the surrounding restaurants are closed on Sunday.  With our plans dashed to pieces, we tucked into bed and decided to call it a night. 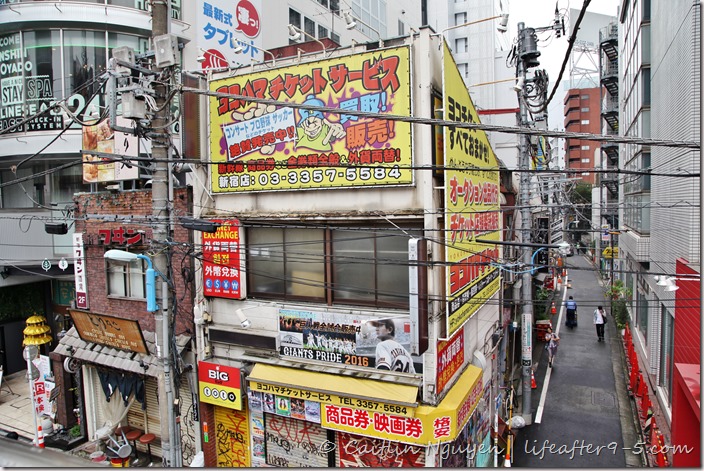 Next morning, waking up refreshed, we started to formulate a plan B.  But before we could do anything, we needed some food in our belly.  So we headed over to Ramen street, an underground corridor with about 10 different ramen restaurants, located in Tokyo station.  The signage in Tokyo being not so great, even with our GPS, we wandered around for half an hour without a clue how to get to this Ramen hotspot.  We even asked for directions from various people who seemed to point us in opposite directions.  Eventually, we found the elusive hallway, but at 7:30 am, our options were limited.  There was only one restaurant open and they served Tsukemen ramen. These noodle shops are usually no frills with high turn over. Before sitting down, you’re directed to the ordering machine where you make your food selection and pay. This takes the place of a regular server and is much more efficient. Once you’ve ordered, you hand over the ticket and wait to be seated.

Tsukemen is the thicker chewy noodles that are a cross between ramen and udon, typically called the dipping noodle.  They are typically served with a small bowl of concentrated soup and a soft boiled tea egg.  You dip the noodles into the soup and slurp away. They thoughtfully provide a splash guard bib in case you’re messy like me. It was the first time I’ve tried this dish, and it was every bit as satisfying as the traditional bowl.

After breakfast, we took the  rapid train over to the Shinjuku area where we walked around the Gyoen National park.  The 144 acre park is a blend of three distinct styles, French Formal Garden, English Landscape Garden, and Japanese Traditional Garden. The Japanese garden is serene and beautiful.  This place is filled with picturesque ponds, forested paths, and groves of cherry trees that blossomed in the early spring – a lovely oasis in the middle of a busy city.  This perfect nature retreat was the key to rejuvenate us after a long 13-hour flight. 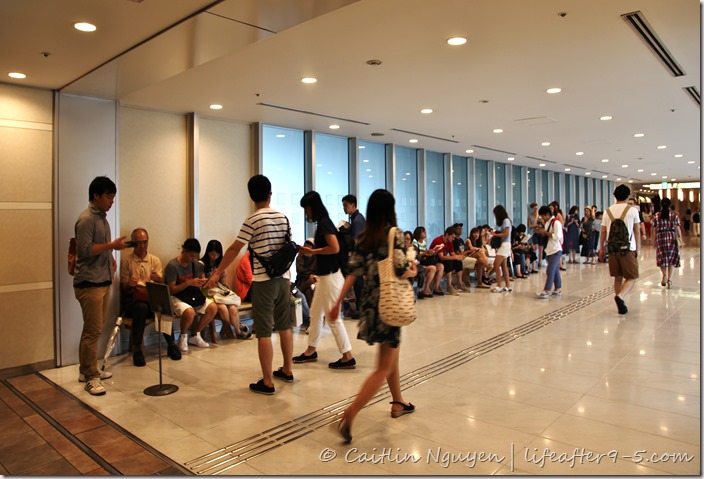 After the park, we headed over to the Shibuya crossroads, the busiest intersection in the world.   It was here that we decided to go for lunch at a sushi place with a long, impossible to pronounced name: Umegaoka Sushi No Midori Sohonten Shibuya, located in the Mark City East shopping center on the 4th floor.  This highly recommended sushi place is rated #11 on Tripadvisor out of thousands of restaurants.  Another bonus is that it doesn’t require reservations beforehand. The restaurant opens at 11 am, but when we got there at 10:57, the line was an hour long already. We signed up and not-so-patiently waited for our number to be called. After an hour and a half wait, we finally got in, which didn’t leave us a lot of time to eat because we had to be back at the hotel by 2 pm to catch a train to the airport. 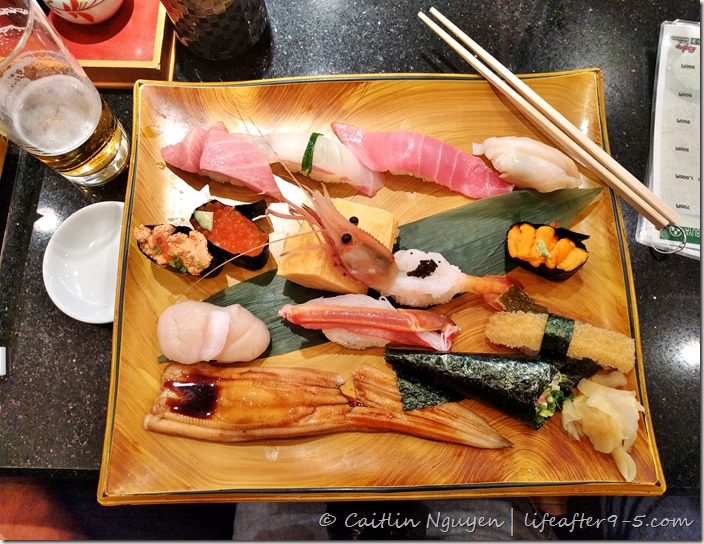 The  sushi combo pictured above was a lot bigger than I expected with a good mix of high end pieces.  It’s also relatively cheap, costing only about $27 USD.  The fish tasted fresh – the fatty tuna melted in your mouth, and the uni was creamy and delicious. Even though the sushi was great, it was still not as good as Sushidai, but to be fair, I have yet to try a sushi restaurant that measured up.  This meal though was definitely worth the long wait.

After rushing back, we barely made it onto the train heading back to the airport where we boarded the plane for another 7-hour flight to Singapore. Tune in next week to read about the rest of our adventure in Asia.