A while ago I wrote about Hallstatt as one of the places I wanted to see; so when we booked our ticket to Vienna, I knew we had to make a little detour. After doing some research, I found out that this picturesque village was only a 3 hour train ride from Vienna. We decided to make a day trip through the Austrian countryside.

Hallstatt is a Unesco World Heritage site, dating back 7,000 years when there was evidence that the prehistoric humans living in the area began mining salt from the nearby mountain. The village on the lake, established in 800 B.C, owes its existence to the rich salt and mineral deposits in Hallstatt mountain. Today, the hamlet is a well known tourist site because of its breathtaking location and picture-perfect landscape. Even though there are only about 1,000 local inhabitants, during the day it can get quite busy with all the visitors from around the world. 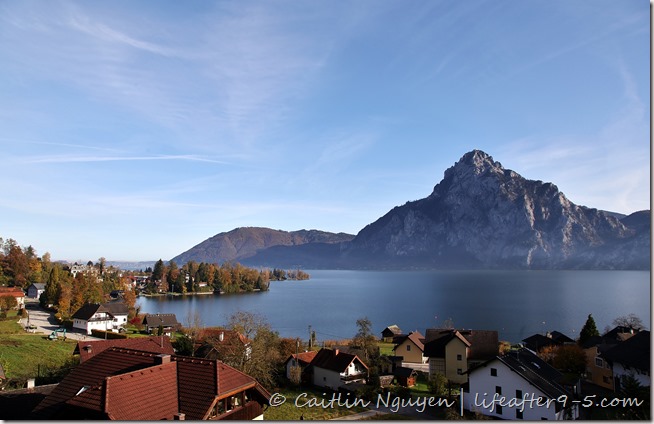 Getting There: We got up early and headed to the Wien Westbahnhof station before 7 am, hoping to catch an early train out. According to the OEBB train website, getting to Hallstatt by train from Vienna is very easy.  You get on the national OBB train and take it all the way to Attnang-Puchheim (pronounced: atten push-en) station where you’ll take a connecting local REX train to Hallstatt.  After Attnang-Puchheim, the landscape becomes more wild and pristine.  On the right side of the train, you’ll see snow capped mountains towering over clear lakes with little wooden houses dotting the Austrian country-side. The whole journey from Vienna takes about 2.5 – 3 hours. Once you get to Hallstatt station, you get off the train and take the ferry across the lake.  When we were there, the ferry was out of service, so we had to get off at the town of Bad Ischl (pronounced: bod ish-el) and take the #3 bus the rest of the way into Hallstatt.

As you get off the bus at the edge of town, you’ll see a charming view of a small village right on the lake overshadowed by mountains on all sides. Drifting down the lake are a few swans that have made Hallstatt their home. These swans were brought to Hallstatt back in 1860 when Emperor and Empress Sisi visited on their annual retreat. Idyllic views don’t get any prettier than this, and that’s why tourists flock here from four corners of the world to see this small village that’s often featured in many travel brochures.  Interesting fact: China was so infatuated with this quaint village, they have attempted to build an exact replica, down to the church steeple, in Guangdong province.

The first thing we decided to do, was take the funicular up to the salt mines, the oldest in the world.  This is a great way to get a different view of the village, lake, and surrounding Alpine mountains. The tour costs 26€ which includes the cost of the funicular ride. Before heading into the mines, we walked over to Rudolf’s Tower, initially built as a defense post for the Hallstatt Salzberg (Salt Mountain) and the miners within. Now, it functions as a lookout point where you can stand on the viewing platform and look down at the panoramic view of the lake and village below. 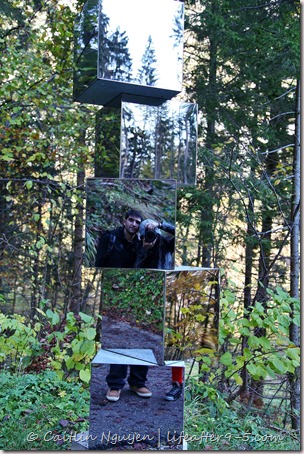 Mirror blocks reflecting the forests around the trail.

From the viewing platform it is a small hike up into the salt mines on a well-worn path winding through the trees.  After changing into our mining coveralls, we headed into the tunnel that leads deep into the rock interior.  It’s dark, with small beams of light illuminating the walkway creating an eerie feeling.  Everyone walked single-file along the glistening rock face, the place where many hard-working miners labored many years ago.

Pink salt, from the iron deposit. 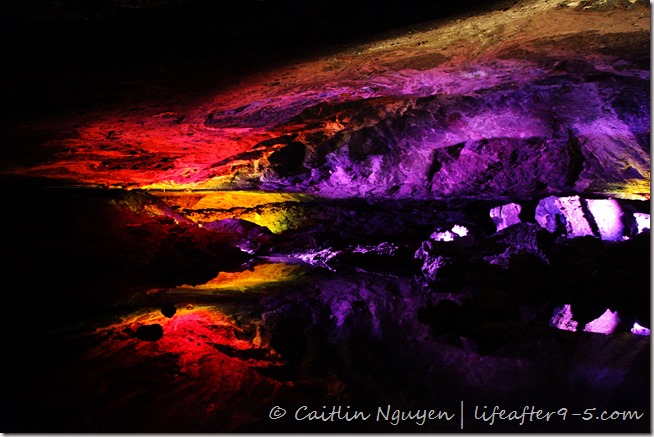 In the archaeological part of our tour, we learned about the 1734 discovery of a body of a miner perfectly preserved in salt, nicknamed “Man in Salt”.  The tour talks about how the mine was formed when tectonic displacement caused the plates to collide causing the shallow sea basin to be trapped inside the newly formed mountains. The sea water eventually dried off, leaving behind salt and minerals that were buried deep within the mountain.  Salt is usually clear but colors can be introduced from the surrounding minerals – red is from iron, and white is from calcium. To end the tour we got to slide down an old wooden miner’s shoot which is about 65 meter drop.

After the salt mine, we headed down and wandered into town.  Walking through the village, you’ll encounter many traditional wooden houses that still stand today. The village is small, the length of the whole area is only about 1 mile, so you can definitely walk around. Toward the center of town is the marktplatz, an open area marked by a fountain and the Holy Trinity statue.  The houses in this part of town were decimated in a fire in 1750, and later rebuilt in stone instead of the typical wood that you see in other parts.  It’s a good place to sit back and people watch as you sip your coffee or eat your lunch.  There are a few restaurants in town, but their hours are sporadic, some don’t open until dinner, and some only for lunch.  It’s also good to note that a lot of the restaurants and shops close early, so make sure you get your souvenirs beforehand. 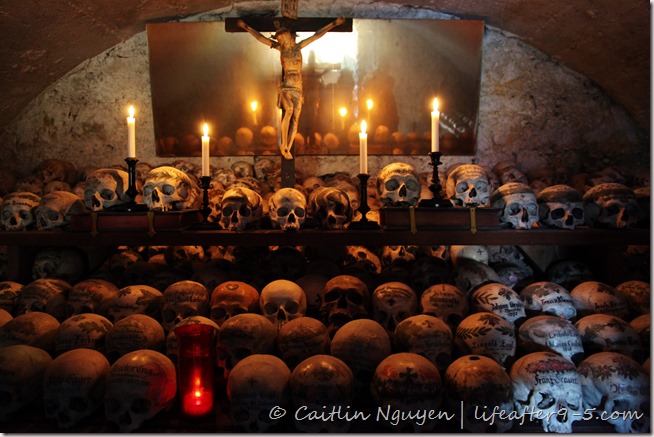 One of my favorite places in town is the Catholic church and cemetery.  Off to the side of the church, you’ll find the tightly packed cemetery over looking the village and the lake below.  Each burial plot is nicely decorated with intricate grave markers and a beautiful flower garden.  Usually cemeteries can be scary looking, but here it just gives you a happy, joyous feeling as you wander around.  Since there is a lack of space, bodies are usually exhumed after 10-15 years and the remains moved from the graveyard to the Bone House.  The skulls are usually cleaned and left outside until they become smooth ivory before they are decorated and displayed inside.

Our last stop of the day was at the other end of town where you can see the village from the vantage point that’s often shown in many photographs and postcards of Hallstatt.  It is a picture of this view that I’d seen when I fell in love with the town many months before I got here.  I have that indescribable feeling when I see pictures come to life, it reminds me why I love to travel so much.  After taking many timeless shots of the village, we headed back into town to catch the bus back to Vienna.  Even though it was a long day, it was totally worth it.