After a week at the beach, we were ready to head into the outback, to see Australia’s most recognizable natural landmark. Ayer’s Rock (Aboriginal name: Uluru) is a large sandstone rock formation rising out of the central Australian desert in the Northern Territories. The monolith has been around for millions of years and is considered sacred to the Anangu, the Aboriginal people in the area. Looking out the window as our plane descended, I could see Uluru dominating the red landscape in the distance.

9:00 AM: Getting out of the airport, the temperature was already hovering at 42 °C (107 °F) and it was only 9 the morning.  My brain couldn’t even comprehend a number that high. It made me miss the nice balmy weather in Port Douglas. We picked up our rental car and headed to Yulara, a tiny village in a middle of the remote desert, built to provide accommodations, restaurants and other essential services for people visiting the Uluru-Kata Tjuta National Park. By the time we checked in and got our room, we were both completely soaked with sweat. Did I mention it was hot?  The first thing we did was go to the market to buy a couple of 2L bottle of water and a very expensive bottle of sunscreen.  We quickly walked back to our room to cool down.  Even with the AC on full blast, we barely felt any cooler.

10:30 AM: After an hour inside, we decided that it was safe to venture out again. Big mistake, the minute we opened the door, my body turned into a puddle of sweat and my brain shut down. Stubbornly, we  pushed on and headed out into the field to learn about the art of boomerang and spear throwing.  Out in the open, the sky was so blue and the clouds drifting along were very 3-D looking. The flat landscape coupled with the vivid colors created a beautiful setting where we practiced our throwing. We were taught to aim the boomerang at a 2 o’clock angle and flick the wrist as we launch it. After a few tries, I ALMOST got one to come back. Fausto was a natural and got his boomerang to go in a perfect arc on the first try.

11:30 AM: After the physical exertion, we headed back to the town center to buy some more water before we became dehydrated. On the way to the market, we passed by and decided to join the didgeridoo lesson. This traditional wind instrument is usually harvested from eucalyptus trees where the inside has been hollowed out by termites. The tree is cut down, cleaned off and painted. Then beeswax is applied to the mouthpiece to create the finished instrument. The didgeridoo is played by vibrating lips while using circular breathing technique to produce the resonating sound. Traditionally, only men are allowed to play the didgeridoo in public. Female didgeridoo players do exist, but their playing usually takes place behind closed doors and is not encouraged by Aboriginal elders. We were told that since women doesn’t have the Adams apple, the vibration from the instrument can cause damage the ovaries resulting in infertility.

12:00 PM: The morning flew by and before I knew it, it was noon.  Usually, I can tell by the rumbling in my stomach, but the oppressive heat took away my appetite. By this point, we had drunk about 6L of water. Instead of having lunch, we decided to go back to our room and have a lie down. We passed by the pool, but the water was so hot, it was more like a hot tub.  In the room, we stripped down to our undies since it was just too hot to wear anything and had a nap. FYI, the flies in Uluru are relentless and not scared of people. They follow you around, take a nice stroll on your face, and swatting them away will not do any good. Once they latch onto your scent, you are stuck, and get your own personal fly for the day. 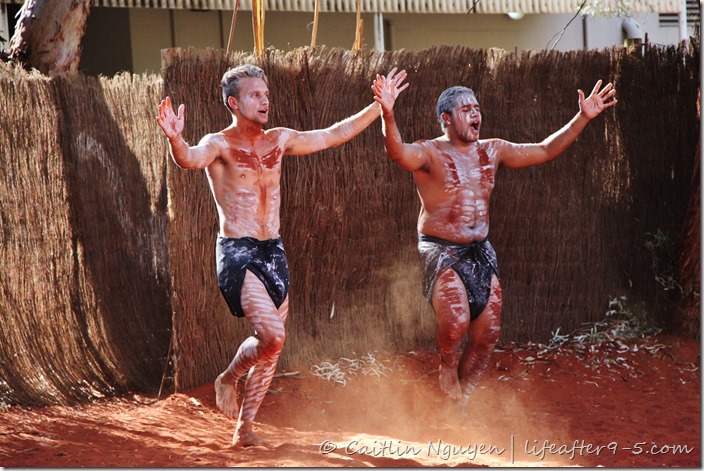 4:00 PM: In the afternoon, we spent some time watching the Wakagetti cultural dancers.  The dances were passed down from the Aboriginal tribes through the generations. Each dance is precluded by a story telling portion to explain to the audience the significance of each move and pay tribute to the elders.  The dancers were energetic and agile in their rhythmic movements.

6:00 PM: We wanted to be at Uluru for sunset, and as we drove closer, the rock became more massive. It’s awe inspiring and hard to imagine that it’s just one giant rock the size of a small mountain. One rock, not a mountain made up of many smaller rocks.

There were two places where you can park your car and watch the sunset. We checked out both, but ended up staying at the second one which had sitting areas where you can see both Uluru and Kata Tjuta in the distance. We took some pictures and sat back to admire the view. The sun slowly set in the horizon turning the sky into a vivid red orange color. Watching the sunset, it’s easy to see why this place is believed to be sacred. This awesome view was worth the possible heat stroke.  We stayed until the sun was completely gone.

8:30 PM: For dinner, we went to a low-key do-it-yourself BBQ joint where you can select and grill your own meat. Along with the meat, you can also get unlimited servings from the salad bar which had corn and potatoes. I got a mixed plate of beef, kangaroo, emu sausage and crocodile skewers. Fausto played it safe and got the Scotch filet, which is Australian for a rib-eye steak. All were good but my favorites were the crocs and scotch filet, both of which was surprisingly tender.The outdoor eating area has a bar and live music making the mood very festive.

10:00 PM: At night, we took the car and drove it back towards the park, where it was nice and dark, perfect for star gazing. Outside, it was completely dark that I couldn’t even see a foot in front of me.  I set the camera on high exposure and stood around quietly waiting, hoping that there are no wild animals nearby.  Unfortunately, there were a lot of clouds and lightning in the distance creating light pollution making it hard to take a picture of the stars. We tried a few times but could not get a picture of the Milky Way. Instead I got few pictures of the lightning which lit up the clouds. We called it a night and headed back. The wind howled and the rain poured as we got into our room.

6:30 AM: It rained all night so we didn’t bother to wake up for the sunrise.  Instead, we waited until 6:30 to head back out to Uluru for an early morning hike along the base.  Ayer’s Rock has a circumference of 10 km and would take the average person about 4-5 hours to walk the loop.  Since we didn’t have time, we decided to walk to the nearest gorge and back. Most hikers start at the crack of dawn because hiking is not allowed after 11 AM when the heat is too unbearable.  Even though it’s frowned upon, some people still attempt to scale the rock. Seeing how steep it is, I can understand that it is a dangerous undertaking because the wind can easy knock you over. 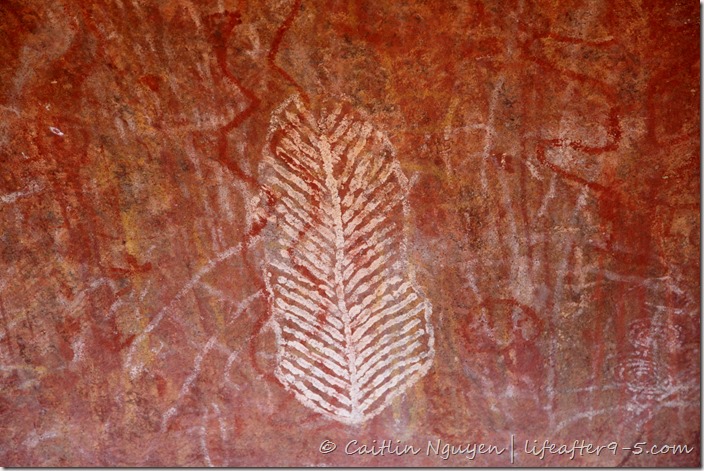 Instead we walked around and marveled at the size of the rock and learned the stories of the people who were first there. The many crevasses and rock caves provided shelter for people. Inside the caves you can still find ancient paintings left from long ago. There are tablets along the trail with information, explaining the significance of each area.

One thought on “Uluru: 24 Hours in the Outback”