Edinburgh is a city filled with culture, heritage, and plenty of history.  As a UNESCO world heritage site, history is an integral part of city’s status. Its inhabitants can be traced all the way back to the Bronze Age when the first settlement was established in the area.

I always want to learn more about the city I visit, especially its history.  Learning about its past really helps me to immerse myself in the experience.  In Edinburgh, to help unpack all of its history, experts have curated a list of 101 special objects that tell the story of the city over the time span of a thousand years.  The items explore the capital’s unique and captivating past, bringing it to life. The objects, selected around seven themes, help connect people to the rich heritage of the city. The different themes cover all aspects of the city’s extraordinary story and allow people to explore less visited corners of Edinburgh.

From the architectural grandeur of the Scott Monument, to the ethereal ceiling in the Thistle Chapel at St Giles’ Cathedral, to St Bernard’s well; every object is fascinating in its own way. To find out more about each object, head over to www.edinburgh.org/101, to learn about the object’s personal history and its place within Edinburgh’s gripping story.  Edinburgh’s 101 Objects run from May  2017 to April 2018 to celebrate Scotland’s year of History, Heritage, and Archaeology. 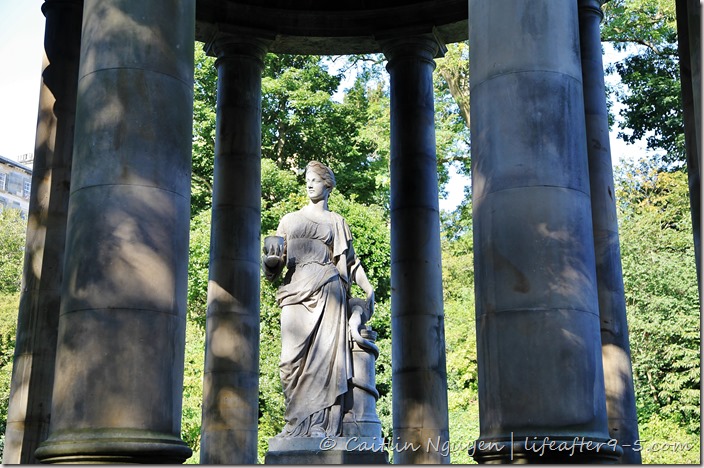 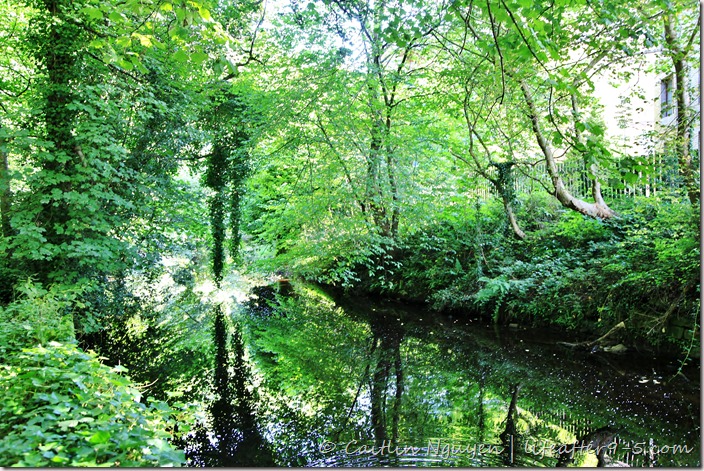 We were lucky to have a private tour from Nick at the Edinburgh World Heritage office. But don’t worry, if you don’t have a private tour, because the free itinerary on the website also acts as a mobile geo-mapped guidebook, allowing you to navigate the city and discover the physical objects for themselves. The best part is that you can tailor the self-guided walking tour to your own interests.  Below is a list of my 10 favorite objects: 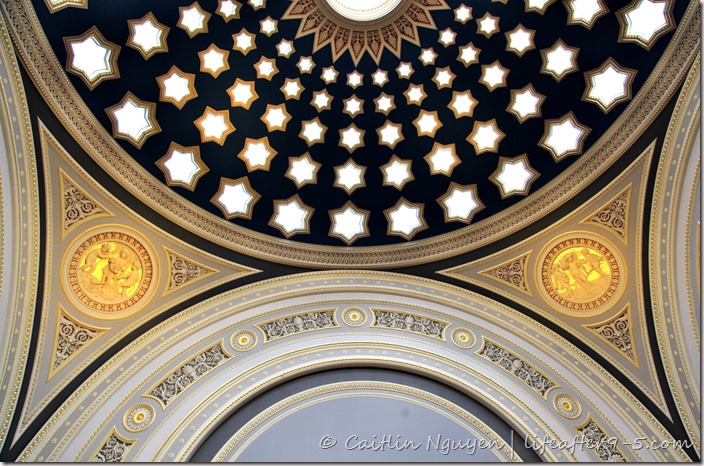 Our first stop was the grand Dundas House, standing at the heart of the city for hundreds of years as an architectural masterpiece in St Andrew Square, and home to the Royal Bank of Scotland.  Taking inspiration from classical Roman, Greek, and Byzantine traditions, architects Peddie and Kinnear created one of the most beautiful banking halls in Britain.  Spanning the vast space is a domed ceiling perforated with 120  glass stars, allowing daylight to stream in. The dome was both beautiful and functional: the story goes that the natural light allowed the clerks to work longer hours. As a result, the RBS was able to extend its working day – an important competitive advantage for the bank and convenient for its customers. 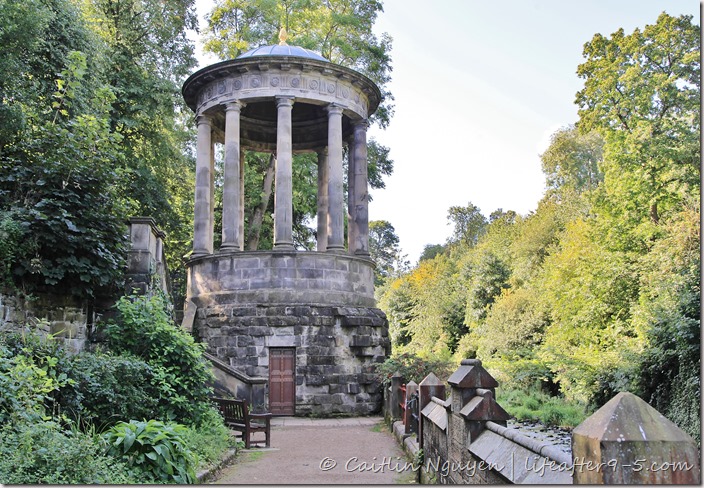 Another intriguing objects on the list of 101 is St Bernard’s Well, an 18th century neo-classical temple. The rotunda was commissioned to be built over a deep natural mineral well in 1789 by the eccentric Lord Gardenston who was convinced it had amazing healing properties. For decades, people would visit Edinburgh to partake of the mineral waters. Some claimed that the water could cure everything from arthritis to ‘total blindness’.

The temple, designed by landscape artist Alexander Nasymth, is surrounded by the green woodland and the babbling brook that flows through the valley.  At the center of an open pillared dome stands a marble statue of Hygeia, Greek Goddess of Health. 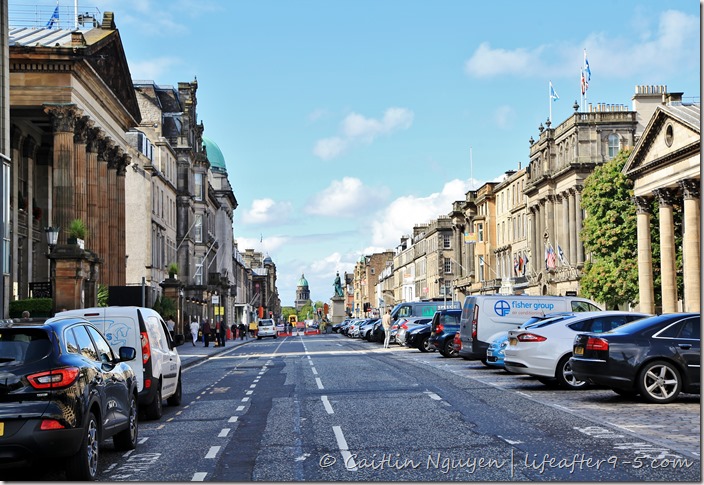 The decision to construct a New Town was decided after overcrowding inside the Old Town city walls reached a breaking point leading to an exodus of wealthy citizens to London. The medieval Old Town is full of narrow closes, dark wynds, and cramped tenements. By contrast, the elegant New Town has wide, perpendicular streets with plenty of green open spaces and public venues.  The broad avenues are lined with with Greek revival buildings and Georgian townhouses built in the neo-classical style. Today upscale boutiques and chic cocktail lounges decorate George street.  You can visit the Assembly Room to see the plans of Edinburgh’s New Town on display on the two maps.

Charlotte Square was the grand finale of James Craig’s New Town plan. The north side of Charlotte Square is considered one of the finest pieces of urban design in Europe and soon become the city’s most prestigious address. The famous Scottish architect Robert Adam designed the town houses on each side of the square as unified blocks, creating palace-like frontages. The grand manor house is decorated with Corinthian pillars and tympanum arches. Today, this discrete building is the official residence of the First Minister of Scotland. The four-story house is where distinguished Scottish ministers, official visitors, and guests are received and entertained.

Edinburgh is a city where nature and city exists harmoniously together.  The perfect example of juxtaposition can be found outside of the Scottish National Gallery of Modern Art.  Charles Jencks’ Landform is a contoured grass mound with three crescent-shaped water pools.  The artwork is a combination of sculpture, garden, and land inspired by shapes of nature as can be seen in waves, clouds, and geological formations. Jencks believe that architecture should be in harmony with nature. The space is open to the public and on a nice day you’ll find lots of people on the terraced paths.

The striking Scott Monument, found in East Princes Street Gardens, is dedicated to Scottish author Sir Walter Scott.  It is the tallest monument to a writer found anywhere in the world. As you climb the 287 steps to the top of the  200ft tall tower, you’ll also see 64 statues that depict characters from Scott’s works as well as key historical figures.

If you enjoy the show Outlander, like I do, you’ll probably have Sir Walter Scott to thank for. Scott’s tales romanticized the idea of the Highlands. In many ways, the romantic image of Scotland that many people around the world hold today is a result of Scott’s genius. His book Waverley popularized tartan (which was outlawed after the Jacobite uprising) and made all things Scottish desirable again.  He re-conceptualized the idea of Scotland and introduced people to its picturesque lochs and islands. Waverley was an instant success and has influenced many other well known writers like Tolstoy and Victor Hugo over the years. 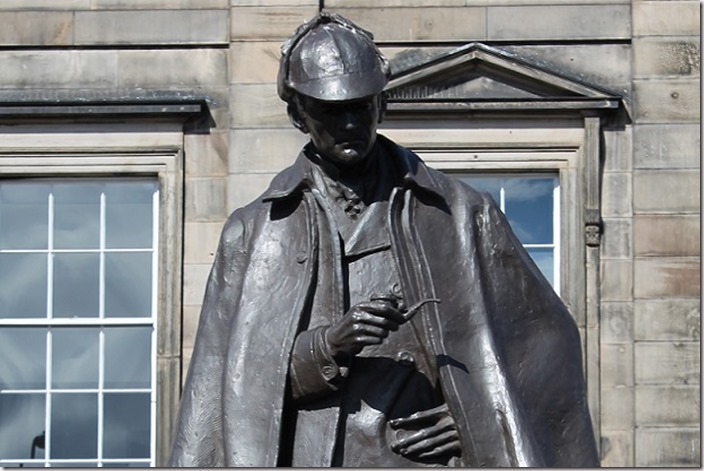 Most people in the world have either read the Sherlock Holmes books or watched the clever duo solve crime mysteries on the small and big screen. But not many people know that the creator of the fictional detective hails from Edinburgh.  A bronze statue of Sherlock Holmes – complete with his pipe, deerstalker hat and Inverness cape, was erected outside 11 Picardy Place to mark the birthplace of his creator Sir Arthur Conan Doyle. At the base of Holmes’ shoes you will find “the footprints of a gigantic hound” from ‘The Hound of the Baskervilles.’ Doyle’s interest in crime developed when he was studying botany at the Royal Botanic Gardens in Edinburgh. Sherlock Holmes has inspired many future generations of crime writers and blockbuster movies from his books.

When you walk down George street, you might come upon a lighthouse model precariously perched over the entrance of a townhouse. This discrete building houses the Northern Lighthouse Board that oversees the the construction and operation of Scottish lighthouses.

While most of you have heard of classic stories like Treasure Island and The Strange Case of Dr Jekyll and Mr Hyde, you probably didn’t know that Robert Louis Stevenson didn’t come from a family of writers.  In fact, he was considered the black sheep of his family because he didn’t show any interest in the family business.  The Stevensons were an engineering dynasty, most famous for their work on lighthouses. Their ingenious designs enabled the lighthouses to be built and withstand the extremely hostile and rough Northern Seas. They have prevented countless ships from running ashore. The family has designed and built most of Scotland’s lighthouses, which are still standing today.

9. Statue of Professor James Clerk Maxwell – #48 on the list

Alongside Einstein and Newton, James Clerk Maxwell was considered one of the most important physicists of all time. He discovered that light is a wave which has both electrical and magnetic parts, which led directly to the development of radar, TV, and mobile phones. His discoveries helped usher in the era of modern physics, laying the foundation for such fields as special relativity and quantum mechanics.  Today you can find his statue right in front of the Royal Bank of Scotland.

Dominating the skyline of Calton Hill is the National Monument of Scotland.  The Monument was built in 1820 to commemorate the Scottish sailors and soldiers who died during the Napoleonic Wars.  It was modeled after the Parthenon in Athens to further consolidate the city’s image as the ‘Athens of the North’. Due to lack of funds, it was left unfinished in 1829. The silhouette of the 12 columns have stood on the hill for 200 years, and serves as a backdrop for visitors and locals alike.

There was an error retrieving images from Instagram. An attempt will be remade in a few minutes.