Now that I am back from Europe, it’s time to finish up the rest of the Australia posts – onward to Melbourne!  After spending a week at the beach and then melting in the outback, we were ready to go back to civilization.  Our first order of business was restaurant hopping. Melbourne is the hometown of Masterchef Australia, so it was no wonder that there were a lot of high caliber restaurants. We made the rounds and visited a few restaurants of chefs featured on the show.  We had only one day to try the food in Melbourne and I think we did a pretty good job fitting it all in our stomach. The day was basically sightseeing interspersed by eating and trying to digest the food as we walked to our next restaurant.

Victoria Night Market – Our first stop in Melbourne was to visit the famous Queen Victoria Night Market which has opened its doors every Wednesday night for 17 years running.  There are hundreds of stalls featuring Melbourne’s most talented artists and entertainers, and in the middle of it all, are the impressive food line-ups with over 60 chefs serving up the best street food Melbourne has to offer.

Even though it was a weekday, the sprawling market was filled with people out in full force with their friends and families enjoying the live music and delectable food from all over of the world. It has the feel of an Asian night market, but on a much grander scale. The mood is festive as smoke from the food stalls drift out into the crowd enticing people with the delicious smell. It was not long before every stall had a long line. We grabbed a drink, some meat on a stick, and wandered around discovering new local artisans.

Chin Chin – This is currently the hot Asian fusion restaurant in Melbourne with notoriously long dinner lines. Chin Chin, spearheaded by chef Ben Cooper doesn’t take reservations, but luckily we got there early before the lunch rush and were seated immediately.  The place is ultra-modern with an industrial feel, super high ceilings, and edgy Asian-influenced graphic art dominating the walls.

After being seated, we were offered a carefully cultivated menu with many dishes perfect for sharing. If you can’t decide, they have a “feed me” option, where they’ll serve up a selection of their favorite dishes for $69 per person. We instead ordered about six dishes to share amongst four people.  Starting with the light Kingfish sashimi marinated with lime, basil, coconut and a hint of chili that gives the dish a nice twist and packs a lot of flavor. We ended with Pad See Ew, where six-hour-braised wagyu beef went perfectly with the rolled rice noodle and crispy shallots. My favorite of the night was the handmade pork and crab cake with salted duck egg and tamarid nahm prik. The dipping is a perfect blend of salty and sour, combined with the fresh herbs and fried crab cake, it was divine. All the dishes packed quite a punch and had a depth of flavor. This great restaurant is trendy and hip, just like the city of Melbourne.

On Nom – After lunch we moved on to dessert at On Nom. We’d first heard of Christy Tania as a guest judge on Masterchef Australia where she set incredibly challenging pressure tests for the contestants where they have to recreate dessert masterpieces. The restaurant, nestled in the Adelphi hotel, serves dessert and and cocktails at all hours of the day. After a filing lunch at Chin Chin, we decided to share the Basil Garden, the signature confection at On Nom. The presentation was visually stunning, with the “garden” made up of chocolate dirt surrounded by perfectly tempered chocolate encasing the basil ice cream. Each element on the dish was edible.

We were so impressed, we decided to order the Strawberry Field, another signature dish and also my favorite. The dessert consisted of strawberry gelato that made up the mushroom head and meringue as the stem surrounded by lychee, raspberries sorbet and rosewater spheres that pops in your mouth. In Australia, the land of fancy desserts, On Nom stands out with their delicate works of art that also taste amazing.

Naked for Satan Rooftop Bar – We came here based on a recommendation from the staff at On Nom. With a name like Naked for Satan, we didn’t know what to expect. Located on trendy Brunswick street, the bar is manned by two big burly bouncers at the door, making it look like a dark dingy strip club. Once inside, we headed to the back and up the elevator to the rooftop. Naked in the Sky is an open terrace with an attached bar, lounge, and restaurant with a breathtaking view of the city on one side and a full length view of Brunswick street on the other. 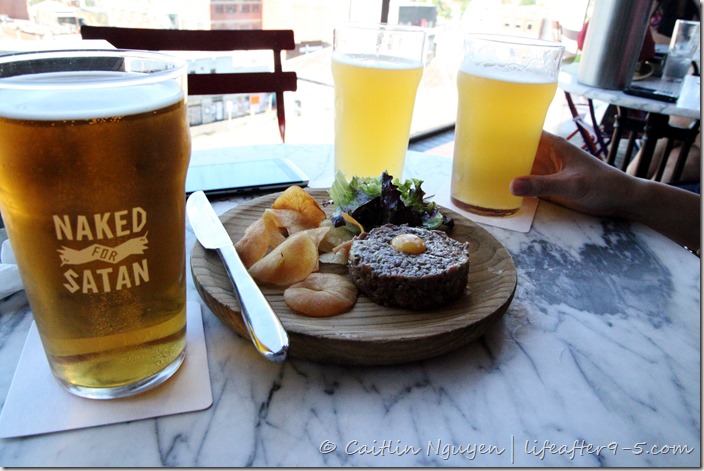 For a lazy Saturday afternoon, the place was hopping and tables were hard to come by. They have a large selection of vodka, delicious cocktails and small plates to snack on. With a gentle mist in the air and a drink in our hands, it was the perfect place to chill out on a hot day. It’s one of Melbourne’s hidden gems. 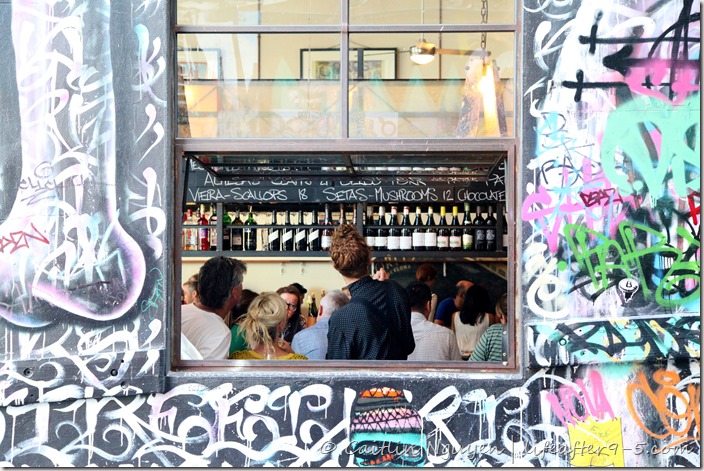 MoVida and MoVida Next Door – For our last meal in Melbourne, we visited a little hole in the wall bar that also happens to be one of the best restaurants in Melbourne located amongst the beautiful graffiti laneways. We started the night at MoVida, and had the memorable Cecina dish consisting of air dried Wagyu beef, poached egg and truffle foam. The creamy truffle foam and poached egg offset the salty beef, creating a perfect balance. Then we moved on to MoVida Next Door, the younger sister of MoVida that shares the same kitchen. Both of Chef Frank Camorra’s menus deliver an authentic tapas experience. 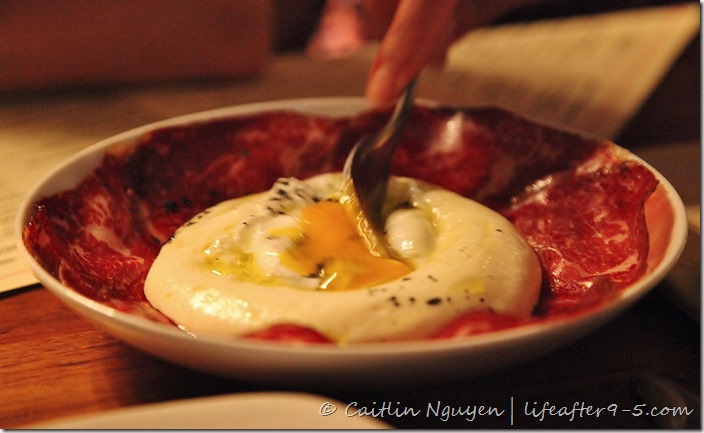 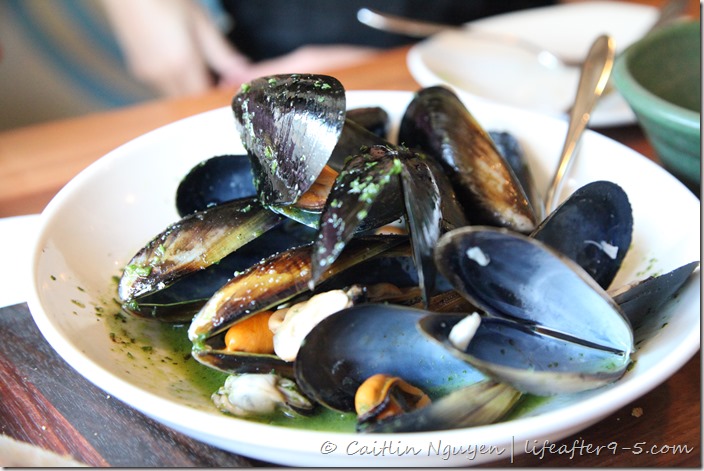 Next Door is a great place to go for dishes featuring seasonal ingredients focusing on seafood. We had the succulent mussels that were perfectly cooked, so that each mussel was still juicy and plum. That was followed by crispy pork belly and pear chutney. Each dish was more delicious than the last and made us wish that our stomach was bigger.

Melbourne’s mix of cultures is reflected in their eclectic dining scene that feature many of the world’s great cuisines. The food here is new and inventive and a perfect representation of the city. From high end tapas in a laneway eatery to intricate desserts, every place we visited we were wowed by the amazing food with “bags of flavor”. The memorable food in Melbourne was the perfect way to end our vacation in Australia.

One thought on “Eating in Melbourne”