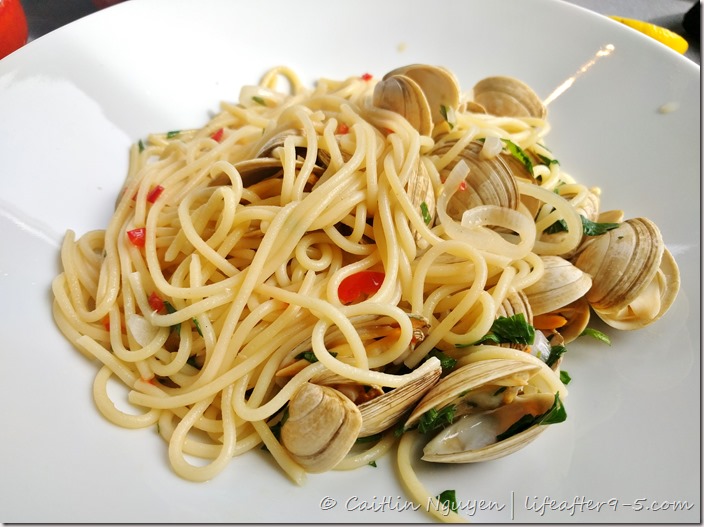 If you’re like me, whenever you hear of Scottish food, you probably think of Haggis.  But with the country’s changing eating habits, Scotland has evolved to be a culinary destination for food lovers with a strong emphasis on fresh and locally sourced produce. With the Atlantic ocean on its doorstep and plenty of rolling green hills means an abundance of fresh seafood, succulent beef, and wild game. You can eat extremely well from the big cities to the furthest isles. Fine bistros, cozy pubs, quirky cafés, and everything in between offer delicious fare. Here is a list of all the food (and drinks) you should try while visiting Scotland:

Pro Tip: If you are traveling to the Isle of Skye, be aware of the shortage of restaurants, especially during the high season.  There are not enough restaurants to cater to the growing number of visitors, so if you want to eat at a reasonable time, you’ll have to book well in advance.  Even when we went during the shoulder season, most restaurants were fully booked during prime time. 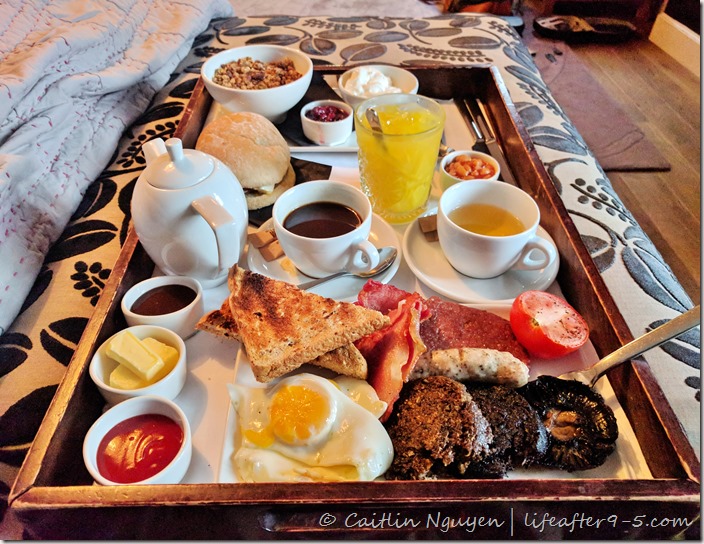 1. Full Scottish Breakfast, similar to a full English breakfast with a few distinctive Scottish elements like haggis, black pudding, and Ayshire bacon – along with the usual staples like fresh farm eggs, grilled tomatoes, sausage, and baked beans.  This breakfast is served at every establishment in Scotland from five-star hotels to pubs.  The first time we tried it was at the Tigerlily  Hotel, where we got complimentary breakfast in bed.  It was also the first time I tried haggis and found myself actually liking it.  We finished the meal sated and ready to start our journey to the Highlands.

2. Fish and Chips – Surrounded by the Atlantic and with easy access to many fishing boats, it’s no surprise that the Scots like their fish and chips. The hand-battered fish fillet, usually cod or haddock, is deep fried to a crispy consistency and always served in newspaper with a side of chips and seasoned with a sprinkle of salt and vinegar. Or if you’re in Edinburgh,  ‘salt n sauce’ – a mixture of brown sauce and malt vinegar or water. Our favorite place is Fish and Chips, a small quayside takeaway shop in Portree that sold piping hot fish and chips cooked to order.

3. Fish Sandwich – this is not your typical McDonald’s Fillet-O-Fish.  In Scotland, the freshly caught fish is lightly battered and fried to a golden brown perfection and served on a warm toasted brioche bun.  The beer batter was light and crispy while the fish inside still retained its moistness. A touch of tartar sauce nicely balanced the whole sandwich.   You can find fish sandwiches in most gastropubs, but our favorite was at the Innis & Gunn Beer Kitchen where they also serve craft beer straight from their brewery. 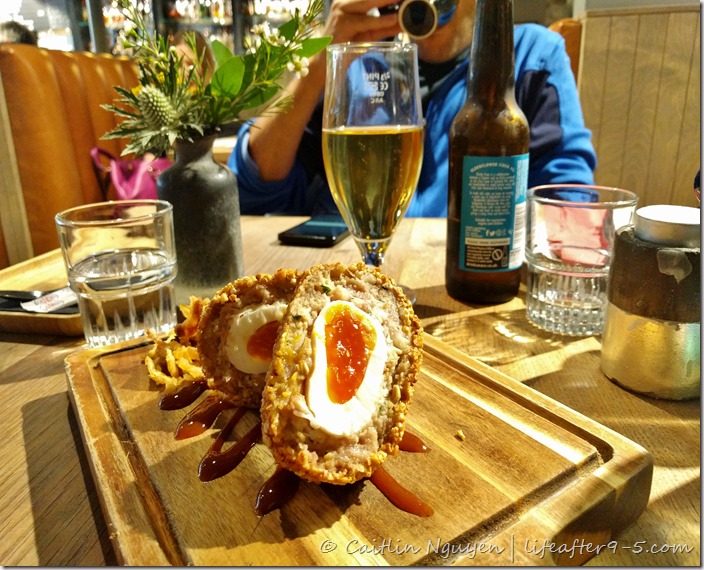 4. Scotch Egg – Even though Scotch Egg is not of Scottish origin per say, it’s served everywhere in Scotland. This traditional pub snack consists of a soft boiled egg covered in sausage, coated in breadcrumbs, and deep fried to a crisp. The outside is golden brown while the yolk inside is soft and runny. 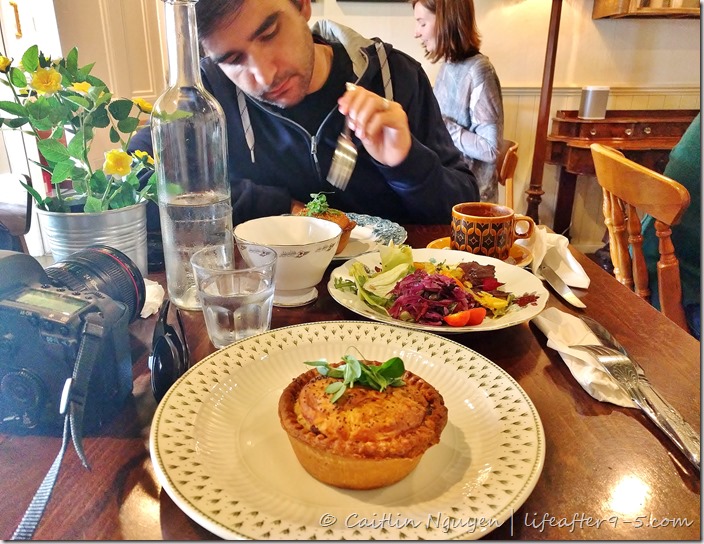 5. Meat Pie – A savory Scotch pie comes in many different varieties with fillings ranging from cheese and onion to minced mutton, and can be served hot or cold -although I preferred mine hot. This little pie may be small, but is packed full of flavor, and the flaky crust gives it a perfect finishing touch. While on our road trip across Scotland, we had tried plenty of meat pies since they are easy to eat on the go. Our favorite place for meat pie was this quaint restaurant called Skye Pie, conveniently located near the major tourists attractions on the Trotternish loop. 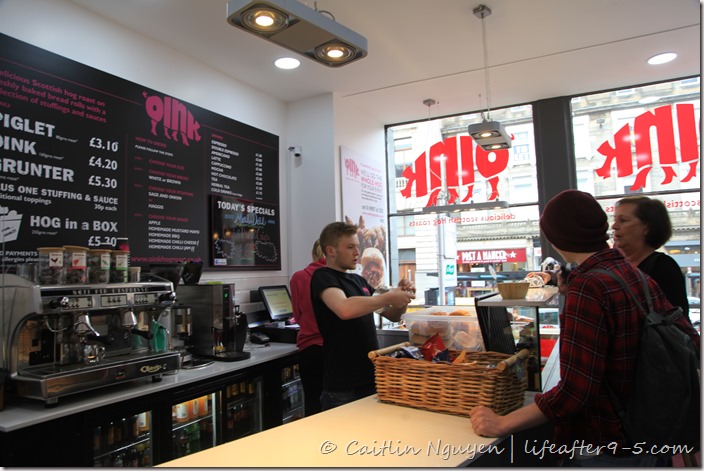 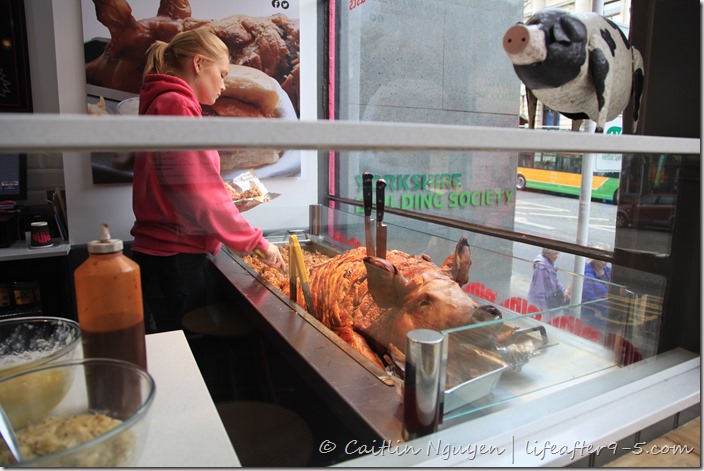 6. Pulled Pork Sandwich – When you think of pulled pork sandwich, Edinburgh probably isn’t the first place that comes to mind.  We didn’t either until we came across Oink, a place serving hog roast in a roll for takeaway. This fast food joint was founded by two farmers passionate about introducing quality farm products in a fast paced city setting. The juicy pulled pork, freshly carved from the whole pig, is served in a roll with your choice of sage & onion, apple sauce, chilli relish, or haggis. Don’t forget to ask for a side of crackling.

7. Haggis is Scotland’s national dish and the object of culinary fascination around the world. Even though it doesn’t look or sound particularly appetizing, the taste more than makes up for it.  This popular dish is a savory pudding that is made up of sheep’s pluck (heart, lungs, and liver), minced onion, oatmeal, and various spices. The mixture is traditionally encased in the animal’s stomach, but artificial casing is now used instead. I was wary the first time I tried it not knowing what to expect, but it was actually really tasty.

8. Bangers and Mash is a classic dish from the British Isles consisting of fluffy mashed potatoes, bangers (or sausages) made from locally raised meat, peas, and topped with a generous helping of gravy. The sausage can come in a variety of flavors, made of pork, lamb, beef or venison. Our favorite was at Four Mary’s, a beautifully preserved pub in the middle of Linlithgow’s main street. The cosy village pub atmosphere combined with a pint of ale and this hearty dish made it a real winner.

9. Scottish Salmon – Salmon is by far one of the biggest food exports from Scotland, so we thought we would give it a try when we saw it on the menu at Red Skye restaurant near Broadford. The pan fried Hebredian salmon comes with cheesy barley, sautéed courgette, green beans, garden peas, a dash of fresh lemon, and finished with coriander pesto.  The dish was surprisingly good and the salmon was cooked to perfection. 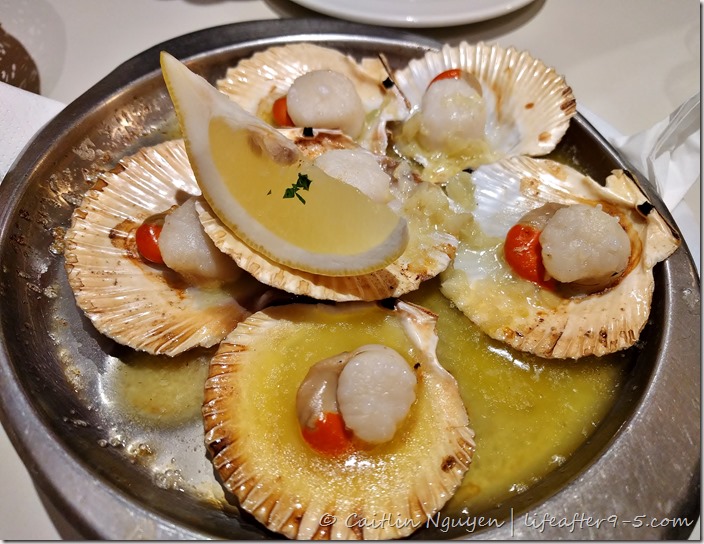 10. Seafood –  Scotland’s coastline is home to thousands of species of fish and shellfish, making it one of the largest seafood producers in Europe. While visiting Scotland, we made it a point to try as much of the fresh seafood as we could, everything from scallops to sea bass.  A few of our favorite places are Loch Leven Seafood, a restaurant overlooking Loch Leven near Glencoe; and Sea Breeze, a restaurant by the quay in Portree.  The food at both places was relatively inexpensive and delicious. 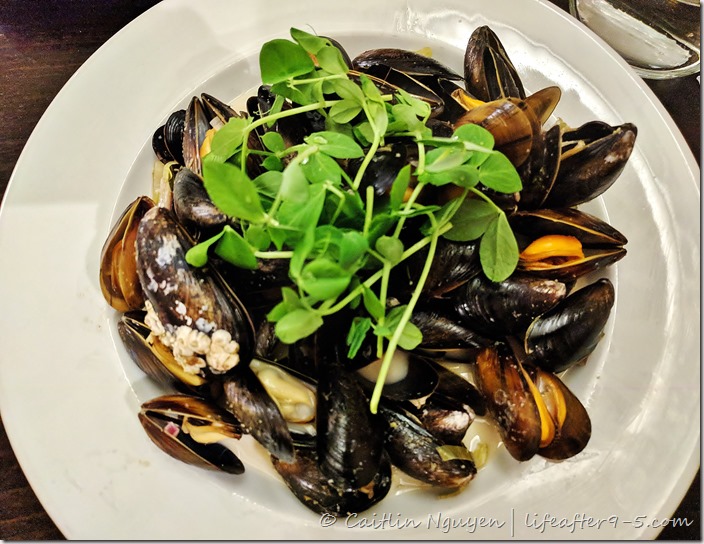 11. Pot of Mussels – Do you know that feeling when you eat something so good that it stays with you even after you’ve left the restaurant?  That dish was the mussels at the Granary in Portree.  The Scottish mussels tasted sweet and fresh like they came out of the sea that morning. They were cooked simply in a regular white wine sauce and cream sauce and served with a slice of bread. Wild mussels are in season between September and March.

12. Langoustine – A langoustine is similar in appearance to a lobster, but much smaller in size.  Its white flesh is succulent, sweet, and has been a favorite of mine ever since I tried it for the first time in Iceland. Langoustines are usually found in saltwater lochs or the open sea, and are one of the most important catches for the Scottish fishing industry. This special shellfish can be found on the menu of restaurants around the world.  Our favorite place for langoustine was at Sea Breeze, a highly rated restaurant in Portree.  The restaurant served langoustine freshly caught from the sound of Raasay along with other locally sourced ingredients. 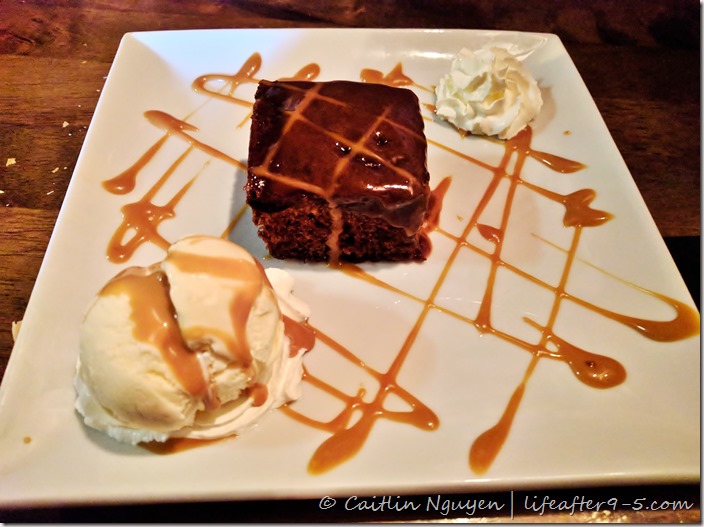 13. Sticky Toffee Pudding – This delightful dessert is a Scottish staple and consists of a warm sponge cake, topped with a velvety sticky toffee sauce and a scoop of vanilla ice cream. Even though I don’t have a sweet tooth, this little gem has been my weakness ever since I visited Ireland a few years ago. I always make sure to end my dinner with a sticky toffee pudding whenever I was in a pub. 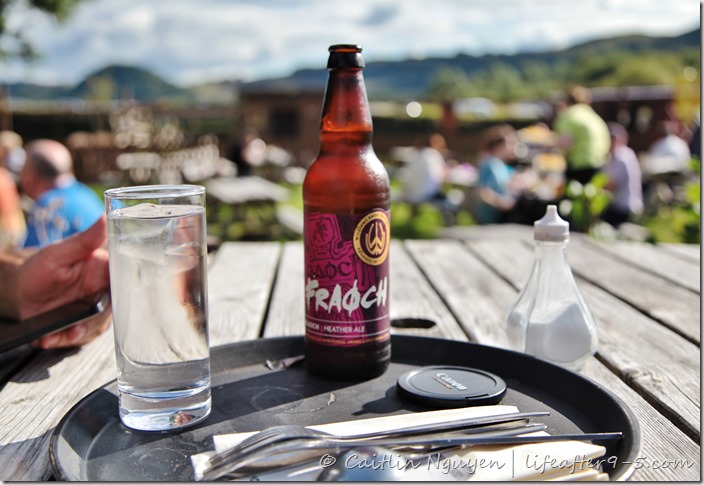 14. Heather Ale – Weirdly enough, I came across heather ale while reading a book about Scotland’s legends and myths which piqued my interest.  In the legend, the secret recipe of heather ale is so zealously guarded that a father sacrificed his son and himself rather than give it up.  After doing a quick search on Google, I found that Fraoch Original Craft Beer has been brewed in Scotland since 2000 B.C! The Brotherhood has been guardians of the ancient Gaelic recipe for “Leann Fraoch” (Heather Ale) and the only brewery that still produces this unique style of beer. I was sold! This light amber ale has a floral-peaty aroma and a spicy herbal finish. 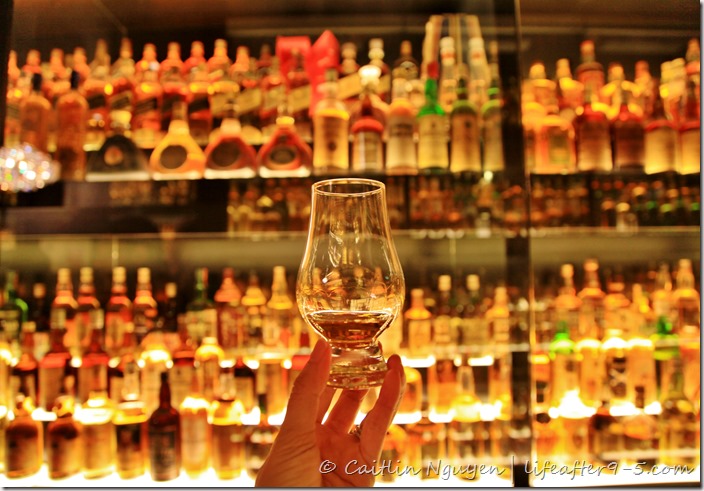 15. Whisky – I would be remiss to compile a list of things to eat and drink in Scotland without including whisky, Scotland’s national drink and its biggest export. A trip is not complete without a few visits to the local pubs and distilleries. Come back next week to learn more about whiskey and how this golden spirit is transformed from pure water and barley to the end product, beloved around the world.  Slàinte mhath!