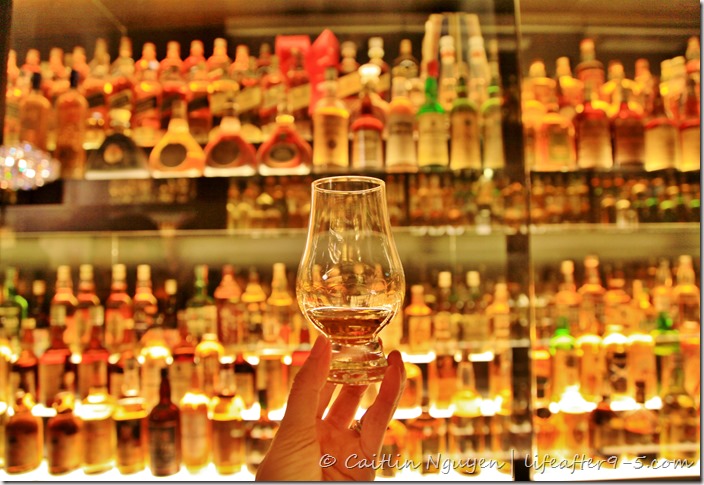 Whisky is Scotland’s national drink and its biggest export. For more than 500 years, skilled distillers have taken the basic ingredients of barley and water and transformed them into single-malt whisky. Over the years, many attempts have been made to copy the unique fiery taste of Scotch Whisky in different parts of the world, but with no apparent success.  By law, the spirit cannot be called Scotch until it has aged in Scotland for at least three years, but most single malt whiskies are left to mature for much longer. 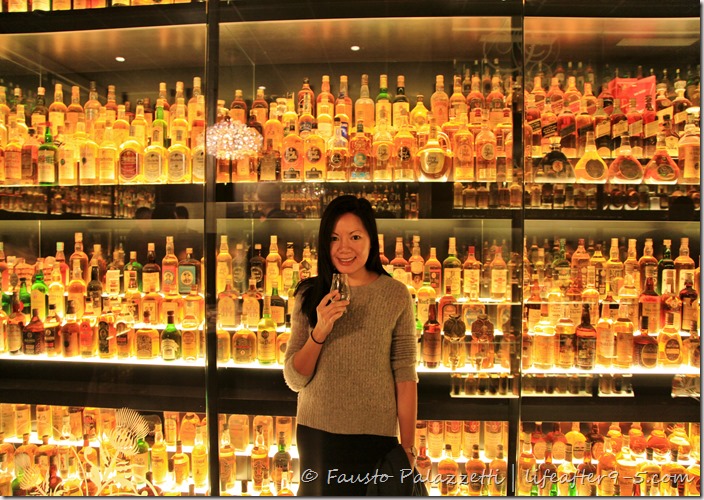 A visit to Scotland is not complete without a few drams of whisky. In addition to trying different types of Scotch, we also wanted to learn more about the whisky distillation process; and to do that, you can take a tour at one of the distilleries around the country or visit the Scotch Whisky Experience in Edinburgh.  The Scotch Whisky Experience works with all of the major major distilleries around Scotland and has the world’s largest whisky collection.  Even if you’re not a whiskey connoisseur like myself, the barrel ride journey through a replica distillery was a fun informative experience. The best part is at the end of the tour when you get to have a taste test of whisky from all five different regions of Scotland.

Following are the steps of the distillation process:

Barley is steeped in water for two or three days and then spread out on the malting floor to germinate.  It is turned regularly to prevent the build up of heat. During this process, enzymes are activated which convert the starch into sugar. After about a week , the barley goes in to the kiln for drying which halts the germination process. The heat is kept below 70°C to prevent the enzymes from being destroyed.  Peat may be added to the fire to increase the smoky flavor of the malt. This stage contributes significantly to the final profile of the whisky.

After the malt is dried, it is then ground up into a coarse flour in a mill. Hot water is added to the mix in 3 stages, each getting progressively hotter. This process converts the soluble starch into a sugary liquid known as wort. The sugar solution is drawn from the mash tun and the solid residues are processed into cattle feed.

After cooling down to 20°C, the wort is passed into large vessels of washbacks where yeast is added to kick off the fermentation process. The living yeast feeds on the sugar in the wort and converts it crude alcohol and carbon dioxide (CO2).  The fermentation slows down after about two to four days. 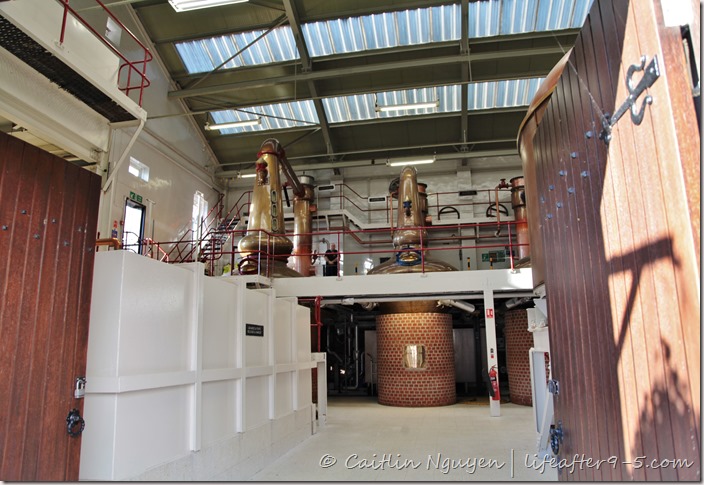 Malt Whisky is distilled twice in large copper pot stills. The liquid wash is heated to 78°C to separate the alcohol from the fermented liquid. The vaporized  alcohol will rise in the tapered tube and pass over the neck of the still into a condenser or a copper coil where it is condensed into liquid state. The distillation from the first run is about 20% to 25% alcohol and is called “low wines.” It is then transferred into the second pot still, and further distilled to an alcohol content of 65% to 70%.

Inexplicably,  the shape of the pot still is the main contributing factor to the taste of a whisky. Each distillery keeps its unique stills exactly the same over the years – a long, slim shape produces pure smooth alcohol, while a short squat shape produces strong, intense flavors. The pot stills must be replaced after 15 to 25 years, and special care goes into making sure that the shape of the still is not changed because it would alter the taste.

The intensity of the heating also plays an important role in the resulting taste of the whisky. If the heat is too high, the resulting whisky will not be as smooth as if it had been distilled slowly. Typically, the distillation process in the spirit still takes about 4 to 8 hours. 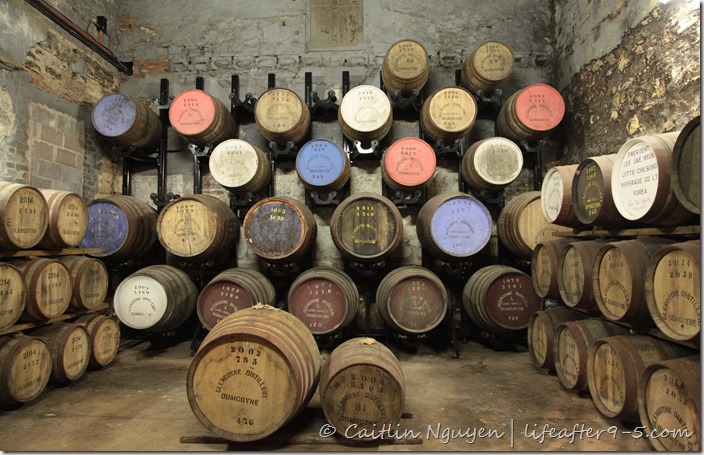 The maturation process begins when the newly colorless distilled spirit, reduced to 63.5% alcohol, goes into oak casks. Only oak casks are used because the wood is breathable and durable. While maturing, the whisky gains flavor and draws its golden color from the cask. The origin of the casks is crucial for the taste of the whisky. Typically casks that held Bourbon whiskey or Spanish sherry are used. Each cask must be marked with a unique number, the name of the distillery, and the distillation year.

Each cask costs about £1,000 and lasts up to 60 years. The casks are regularly refurbished in cooperages. Some casks are used several times over the decades. The first fill cask will impart the most flavor to the whisky while subsequent fills in the barrel result in much less flavor.

Whisky becomes mellower after each year. By law all Scotch whisky must be matured for at least 3 years, but most single malts mature for 8 years or longer; excellent single malt whiskies are matured for at least 12 to 21 years. Each year, at least 0.2% to 0.6% of the whisky evaporates through the cask walls. The Scots call this evaporated alcohol the Angel’s Share. After 50 years, there is only 36% of the original barrel left.

In order to achieve a consistent taste, distilleries often blend their whiskies from several casks. However, since all the whiskies come from a single distillery, it is still called ‘single’ malt.  The age on the bottle refers to the youngest whisky used for that particular bottle.

As we learned, many factors contribute to the ultimate taste of the whisky. Natural elements of water, peat, and the Scottish climate all have a profound effect on the flavor of Scotch Whisky, but the most important single factor is water. Scotland’s unique water is soft because there is very little limestone. The rain water flows over hillsides overgrown with heather through peat meadows absorbing the unique flavor typical to each area. Distilleries drawing their water from different sources will produce whiskies that are quite dissimilar in flavor.

The Malt Whiskies are grouped by the geographical location of the distilleries; each region has its own distinctive taste:

With over hundreds of distilleries spread across the five whisky regions of Scotland, we were determined to visit a few on our road trip.  However, due to time constraints, we were only able to make it to Glengoyne, a distillery that has been continuously in operation since 1833. Sitting at the foot of Dumgoyne Hill near Loch Lomond, its location upon the Highland Line makes it one of the few distilleries producing Highland single malt whisky matured in the Lowlands. Glengoyne’s stills are in the Highlands while maturing casks of whisky rest across the road in the Lowlands.

Unlike many malt whisky distilleries today, Glengoyne does not use peat smoke to dry their barley, they let it air dry.  Glengoyne has the slowest rate of distillation of any other malt whisky in Scotland. The spirit is nursed through the stills at one third the normal rate to create a smooth, sweet, fruity taste. The spirit is then matured in oak casks which have previously contained Spanish sherry or Tennessee bourbon to further enhance the complexity of the flavor. At Glengoyne, one of their oldest barrels, a 50 year whisky, costs about £20,000.  It was interesting to learn that you can buy a whole cask and have it stored in their warehouse, but it’ll cost you the initial cost of the cask and whisky plus you have to pay an annual storage fee.  When it’s matured, you have to pay a bottling fee on top. It’s cool to say that you own a cask of whisky, but it can be an expensive hobby.

Glengoyne is open all year for guided distillery tours that take you through the actual distillery and let you learn about the whole whisky making process. The distillery is located just a 40 minutes drive from Glasgow and pretty easy to get to. The tour ends in the whisky shop where you get to taste final product. Slainte mvath!

One thought on “Whisky Tour”