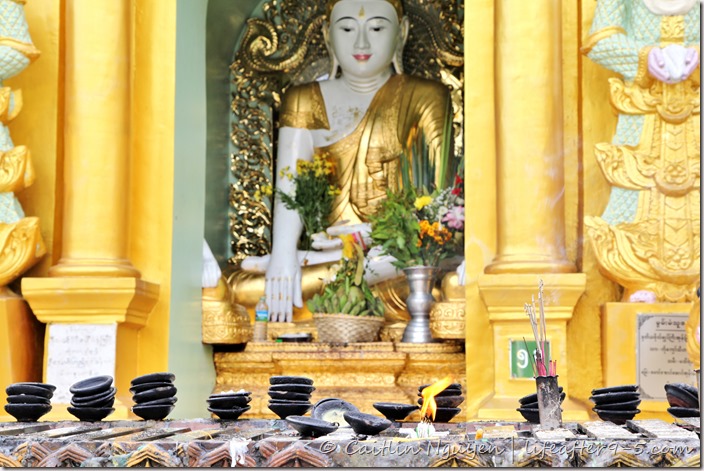 Yangon is filled with hundreds of pagodas and other religious monuments, and you could spend days exploring them. But this was the first leg of our trip and we didn’t want to get temple-fatigue, so we only visited a few.  The following are some of our favorite religious shrines found around the city: 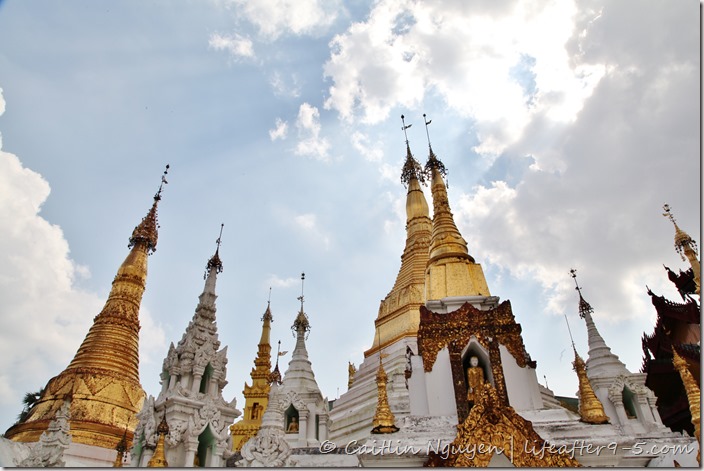 Shwedagon Pagoda– It is one of the most famous pagodas in the world and the crown jewel of Yangon. As Myanmar’s most sacred temple, it is customary for people following the Buddhist faith to make the pilgrimage to the Shwedagon at least once in their lifetime.  According to legends, the Pagoda was constructed more than 2,600 years go, which would make it the oldest temple in the world,  but archeologists placed the date at between the 6th to 10th century.  It is believed that the pagoda contains the holy relics of four of the previous Buddhas.  A story was told about how two Burmese brothers met Buddha and he gave them eight of his hairs to bring to Singuttara Hill, where relics of the three previous Buddhas had already been enshrined. The brothers returned to Burma, found the spot where the relics of previous Buddhas were enshrined and built a pagoda over it. 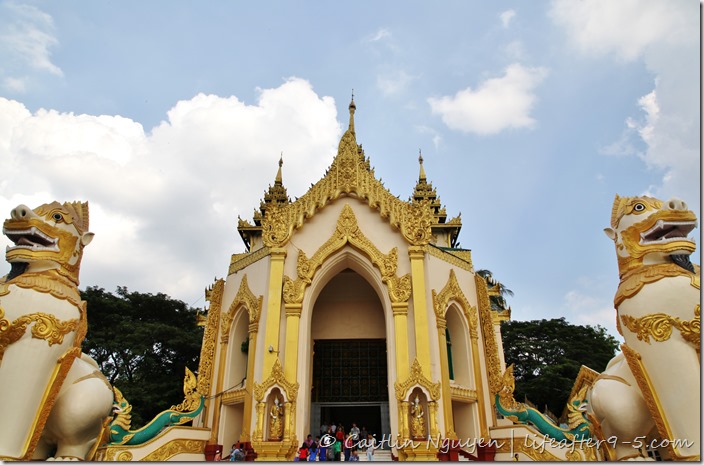 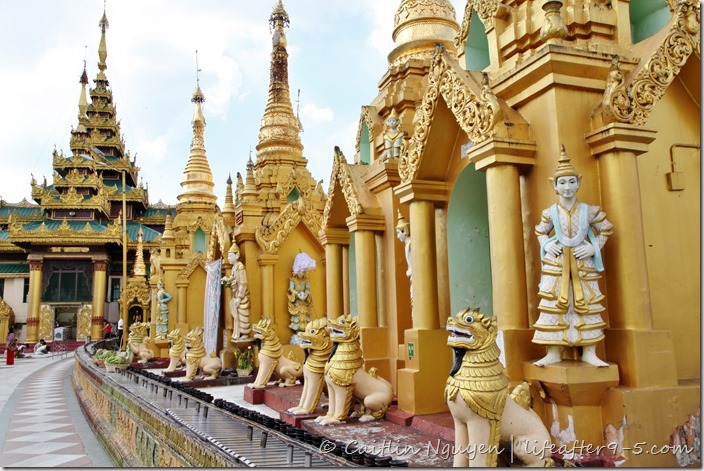 The massive pagoda sits atop a small hill and can be seen from almost anywhere in the city. There are four covered walkways leading up to the pagoda’s platform. We entered through the main entrance that is guarded by two 18-foot-high chinthe (mythical lion-dragons) at the southern gate.  The temple opens daily from 6 am until 10 pm, and admission for foreigners is 8,000 Kyatt.  You must also remove your shoes and socks before going up. The steps are lined with shops selling flowers for offerings, as well as Buddha images, incense, and various other souvenirs.  Both the Northern and Southern entrances have multi-level escalators. 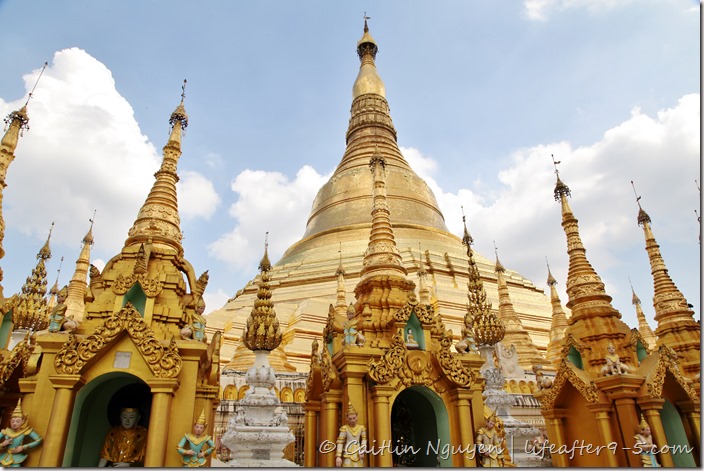 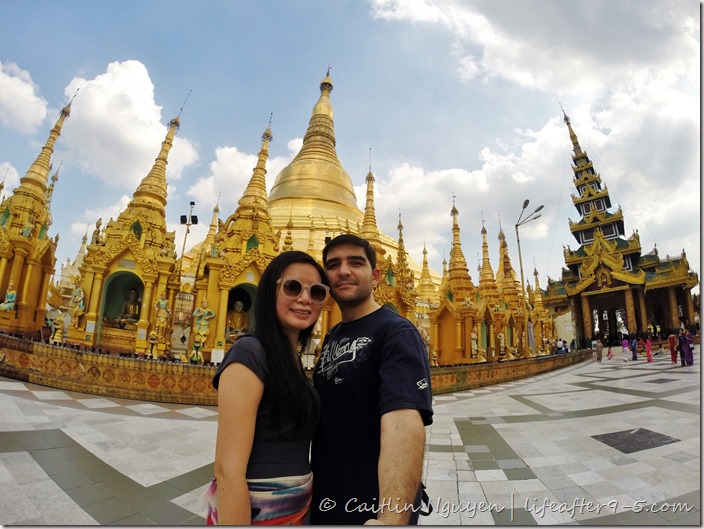 The main pagoda stands close to 100 meters tall, covered in gold and other precious jewels. The base, covered in gold plates is topped by a stupa encrusted with over 7,000 diamonds, rubies, and sapphires. The very tip contains a 72 carat diamond.  Everyone can walk around the main stupa, but only monks and other males can access the terraces above the base. 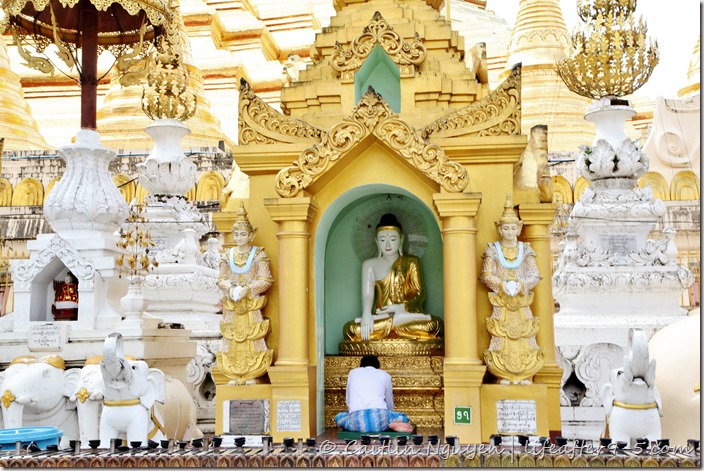 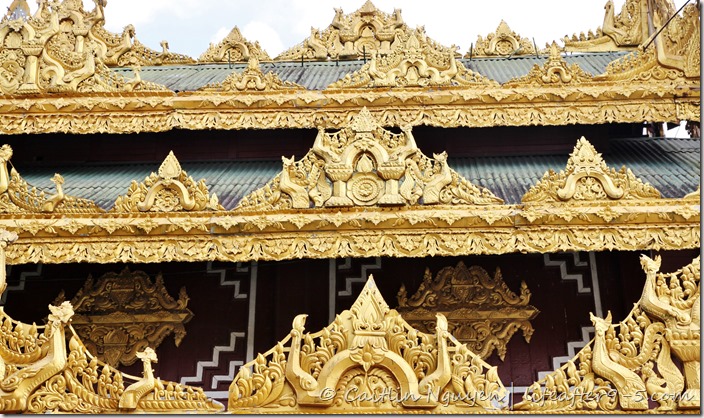 Around the main structure is an array of smaller shrines, statues, and temples. The main attractions are the temples that house the holy relics of Buddhas.  I am mesmerized by the intricate details of the wood carvings in the temples. We walked around for about 2-3 hours, stopping to pray and take pictures.  It’s quite challenging to navigate the scalding tile floor during the middle of the day. 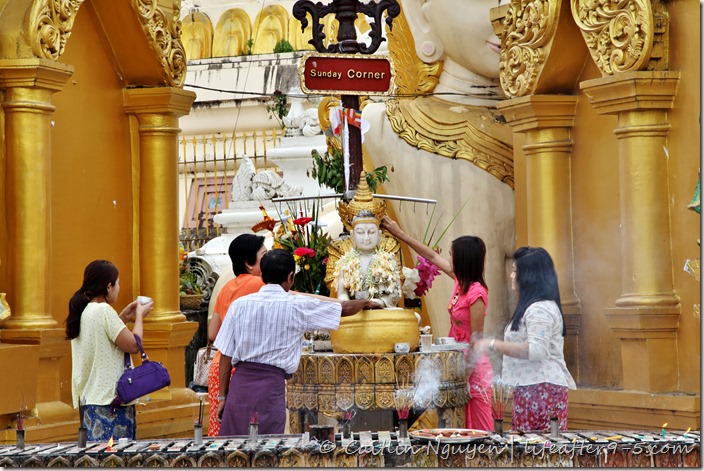 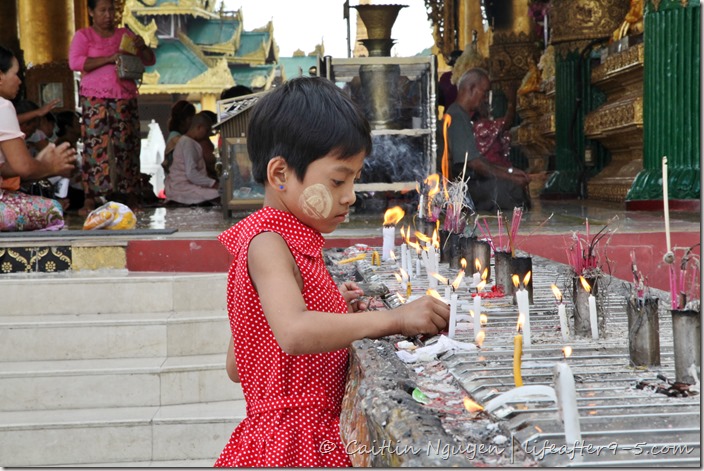 Most Burmese people follow Theravada Buddhism which is largely influenced by astrology.  It is important for Burmese Buddhists to know the day of the week on which they were born, as it determines their planetary post. There are eight posts, one for each day and an extra for Wednesday.  They are usually found around the perimeter of the main stupa and  marked by an animal that represents that day.  I was born on Sunday, but if you don’t know your birthday, there are fortune tellers at the entrance who can help you figure it out, or you can just go on the internet and look it up.  People go to their planetary post to pray and offer flowers. They can also pour water on the Buddha image, a ritual that symbolizes washing away old sins to bring in a new beginning and is usually carried out by people who want to get rid of their misfortune  to attain a peace of mind. 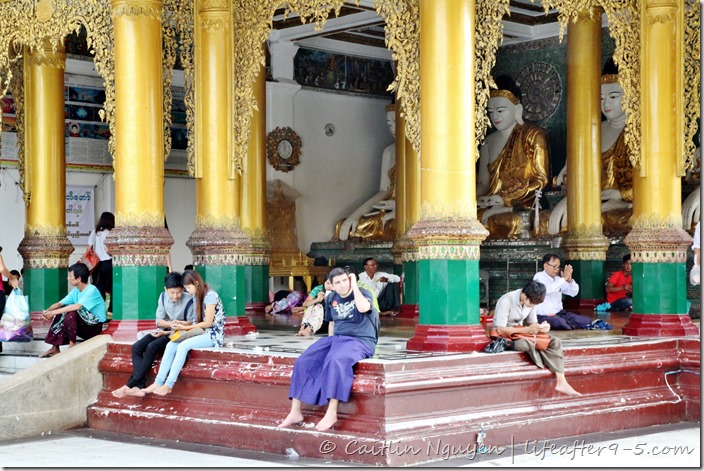 This place reminded me a lot of the grand palaces in Thailand. The main difference is that you see less tourists and more locals and monks walking around the premises. Families usually come to pray and end up spending the whole day here.  They bring food to eat and take an afternoon siesta under one of the sacred temple roofs, a good way to avoid the harsh sun outside. 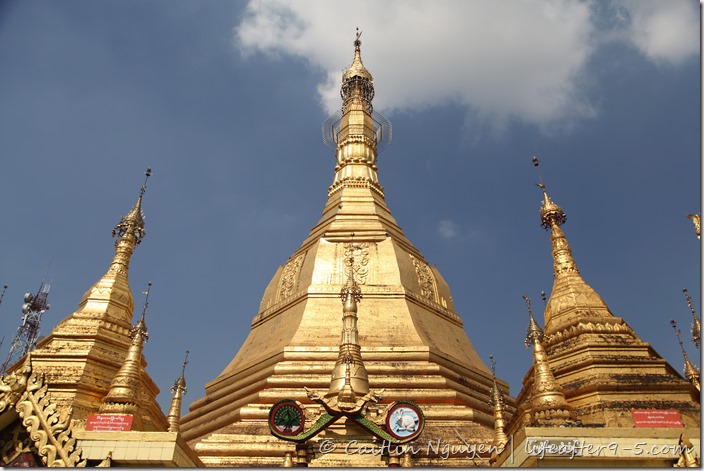 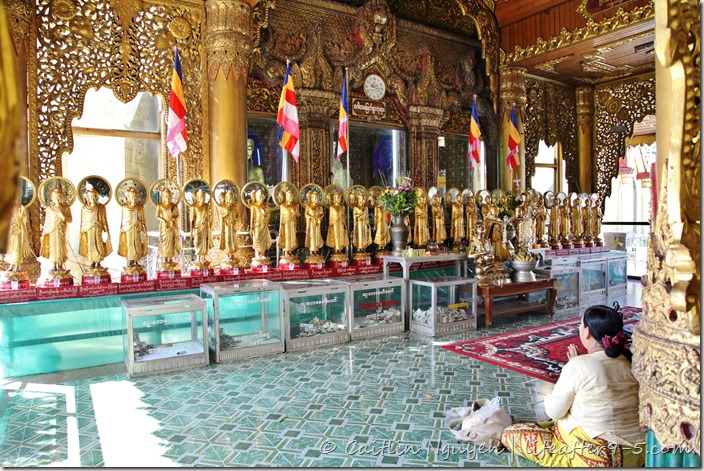 Sule temple – This ancient shrine is located right in the downtown core at the corner of Sule Pagoda Road and Mahabandoola Road. The temple’s origin is said to date even further back than Shwedagon – over 2,000 years ago. The golden pagoda has a unique octagonal shape that tapers up to the inverted bowl. 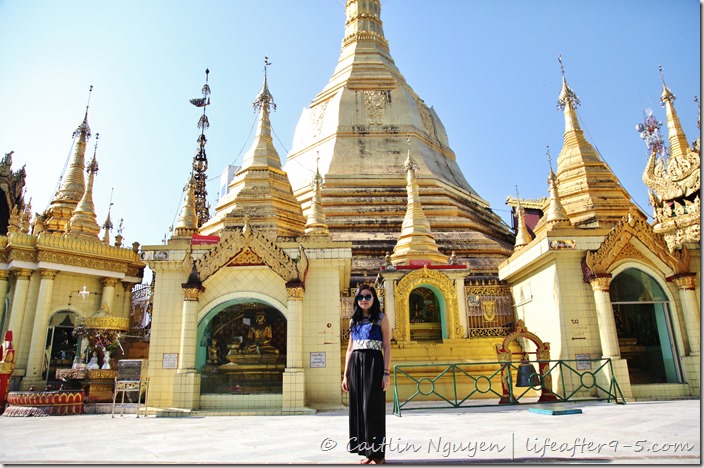 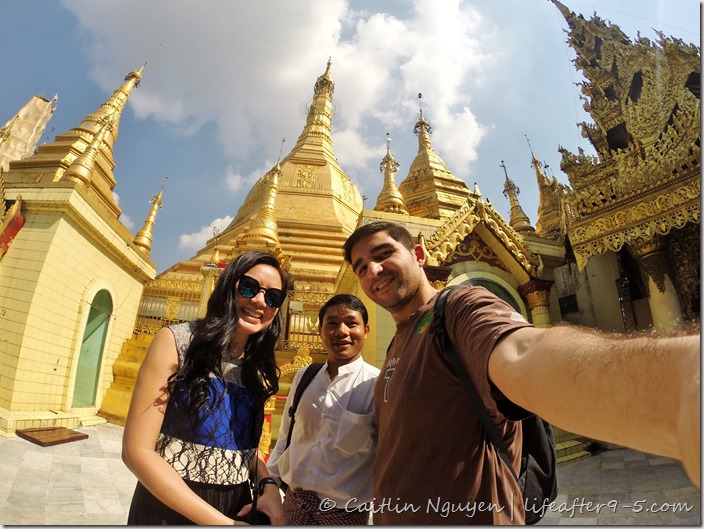 At each cardinal direction – North, South, East, West is a Buddha, each one symbolizing a different buddhist virtue – for example, the Buddha of the east represents teaching. Aside from Buddha, there are also several images of Nat spirits found on the Sule grounds. Nat spirits have been worshipped in Burma for centuries. 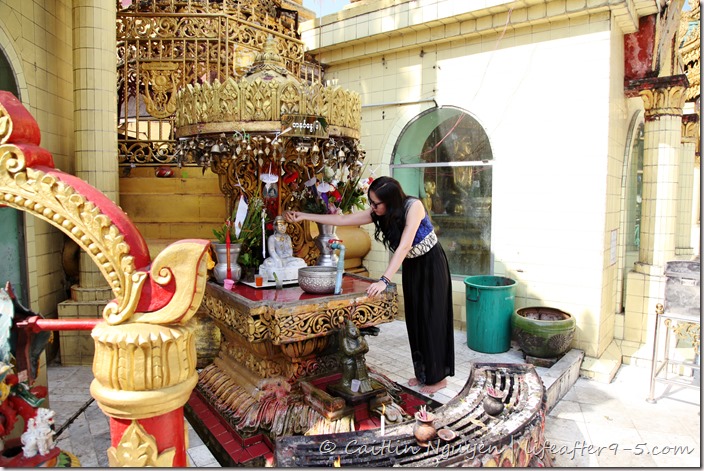 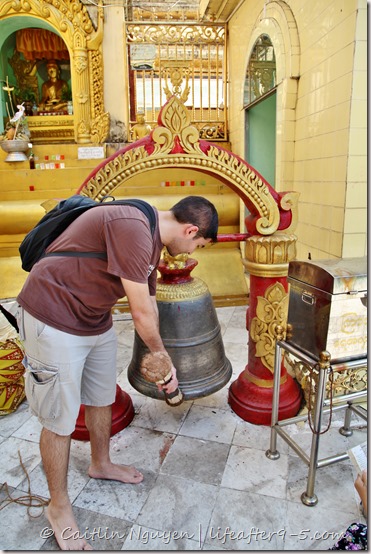 The custom is that visitors first pay homage to the main Buddha, with an offering of flowers and candles, and then worship at the shrine of the Buddha of their birthday. At each place, they can pour water over the Buddha statue to help ease their suffering, or ring the bell to share their joy. 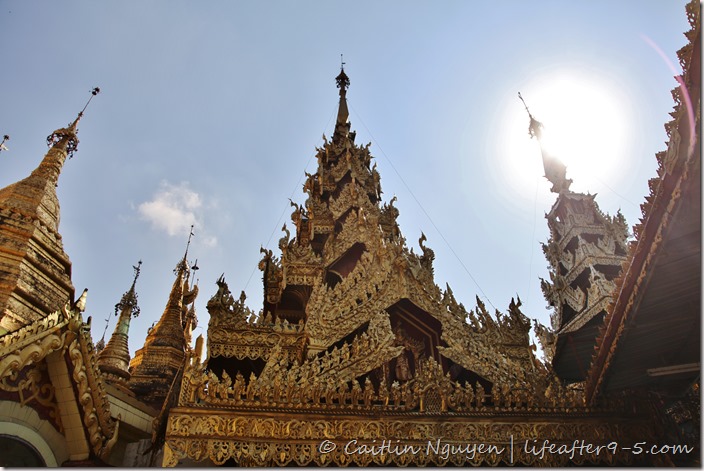 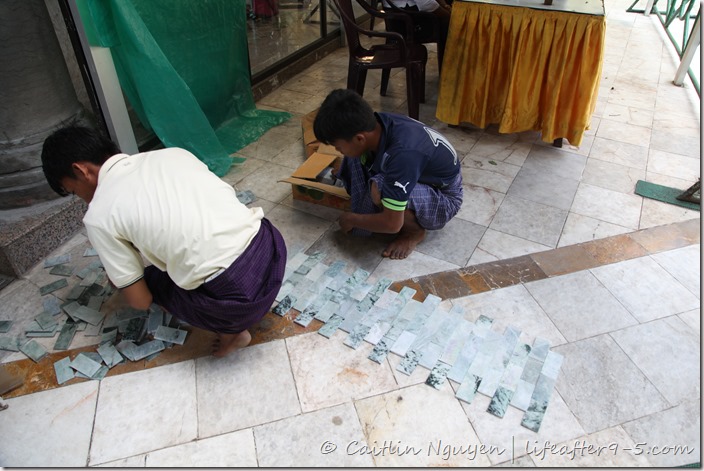 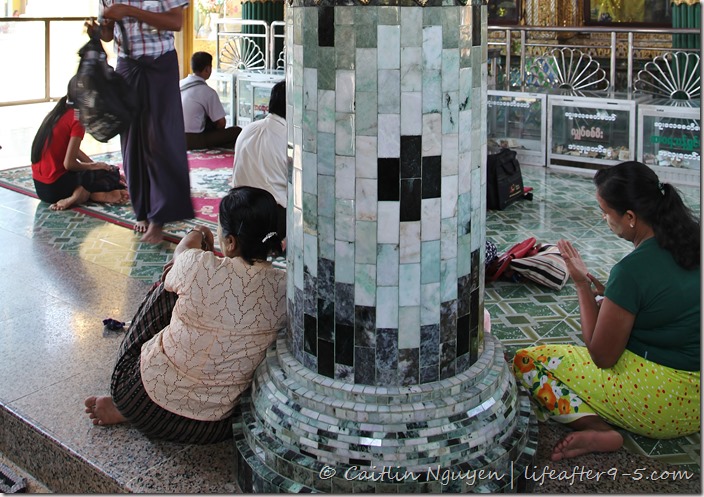 Even though it’s smaller, the temple is just as ornate. The stupa is gold plated at the top and covered in gold leaf at the bottom.  We also saw people putting tiles onto the support posts, made with real jade. 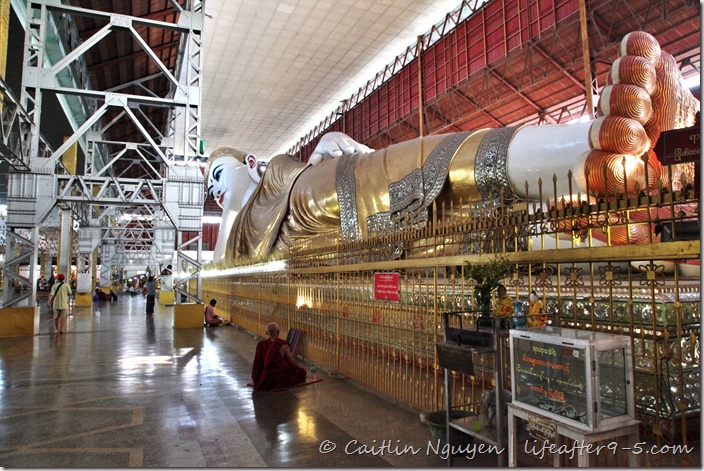 Chauk Htat Gyi Pagoda – In the North of Yangon, tucked away in an airy space that looks more like a warehouse than a temple is the enormous 65 meter long reclining Buddha.  Unlike the other two temples we’ve visited, Chauk Htat Gyi is relatively new, having been constructed at the turn of the 20th century. After years of neglect, it was renovated by a devout Buddhist named U Hop Thar, with donations from the local community. 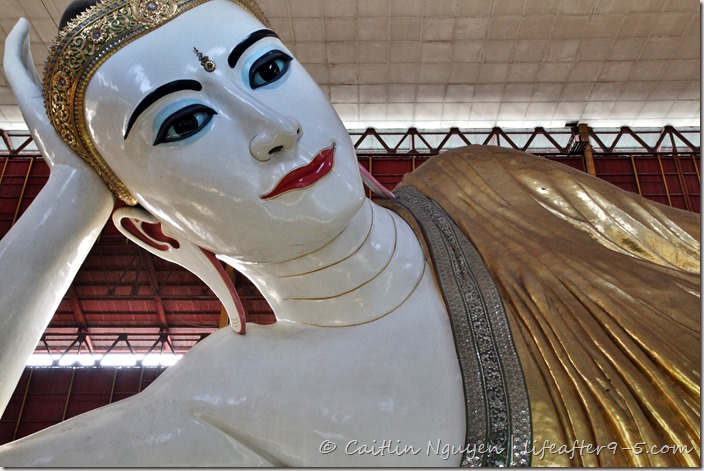 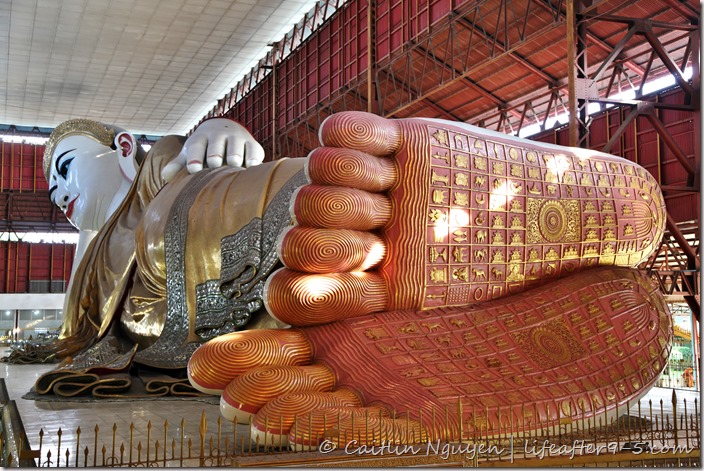 The impressive Buddha image draped in a golden robe  is resting on his right arm, looking relaxed and at peace.  The statue’s porcelain face with its large eyes, bright blue shadow and vermillion lips is really captivating. On the other end is Buddha’s staggered feet with the soles decorated with 108 sacred Buddhist symbols. 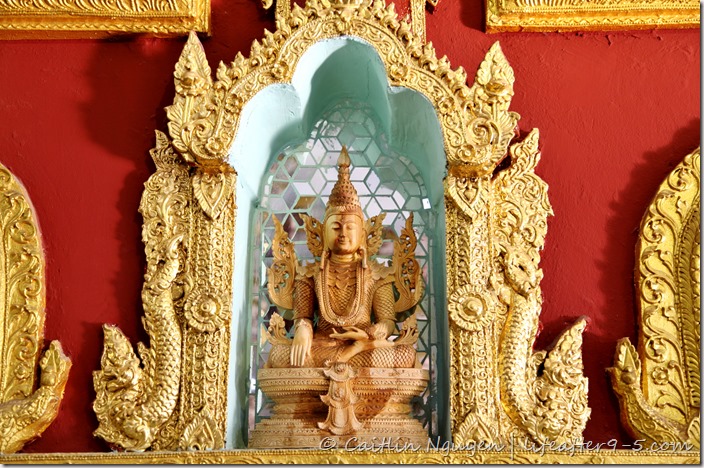 Surrounding the statues are smaller shrines that hold the wood carvings of the other bodhisattva. 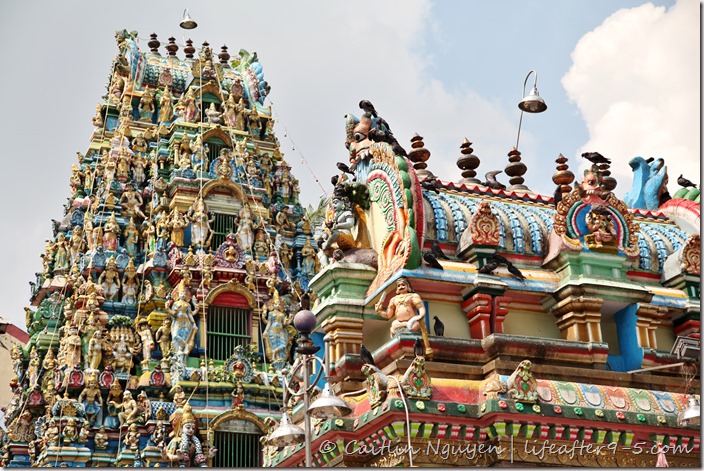 Sri kaali temple – This Hindu temple can be found in Yangon’s Little India, located in the heart of the city.  It was built by Tamil migrants during the colonial times and maintained by the local Indian community. The colorful façade is covered from top to bottom with stone carvings of Hindu gods. 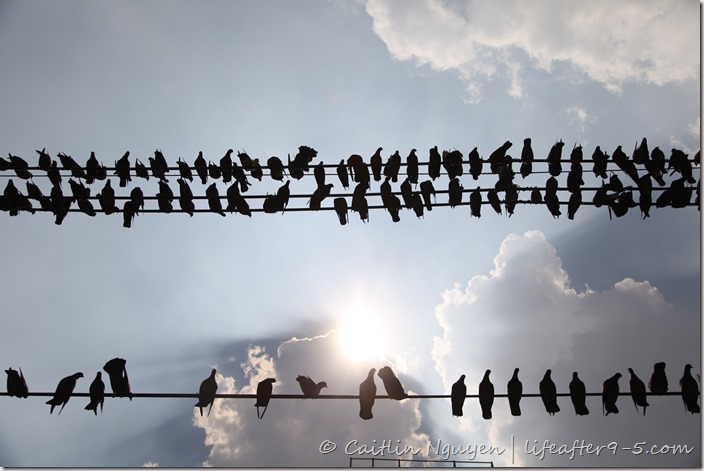 It was closed when we were there, so we only got to see the outside.  Surrounding the building there were lots of vendors selling bird feed, drawing hundreds of birds to the area. they were all hanging off of the power lines, keeping an eye on all the people who visit the temple.