Every time we travel out of the country, we get the same warning from our doctor: do not partake in street food.  Each and every single time, we chose to ignore that advice because to me, eating street food is half the fun of travel.  It’s where you get to try the most authentic local cuisine that also just happens to be super affordable.  That’s exactly what we did in Yangon.  Our motto was: forget the pizza and hamburgers (not that there are a lot McDonalds there),  jump in and try something that you won’t be able to get at home.

One thing you should know is that food in Myanmar is ridiculously cheap.  It’s possible to only spend a few dollars for a bowl of noodles and a large beer.  While we were there, we definitely ate well on a budget.  The Burmese cuisine is an amalgamation of Indian, Malay, Thai and Chinese food, depending on the regions.  The northern area is influenced by the food from Nepal and India while the southern region draws its inspiration from Thailand.  The food is a bit heavier and more oily than we are used to from Vietnam or Thailand where there are more fresh herbs to brighten up the dishes.  Overall, we really enjoyed some of the new dishes that we got to try like Shan Noodles and tea leaf salad, and looked forward to try to make it ourselves at home.  Here are some of the places and things we ate while in Yangon:

Mohinga – This popular rice noodle soup is considered by most people to be the unofficial national dish.  Typically served at breakfast, but can be eaten throughout the day, this hearty fish-based curry soup provides a good start to everyone’s day.  Thin vermicelli rice noodles are usually served in thick fish broth with a boiled egg  and crispy fritters.  You can add in other condiments like coriander, lime juice, and chili flakes on top to suit your tastes. 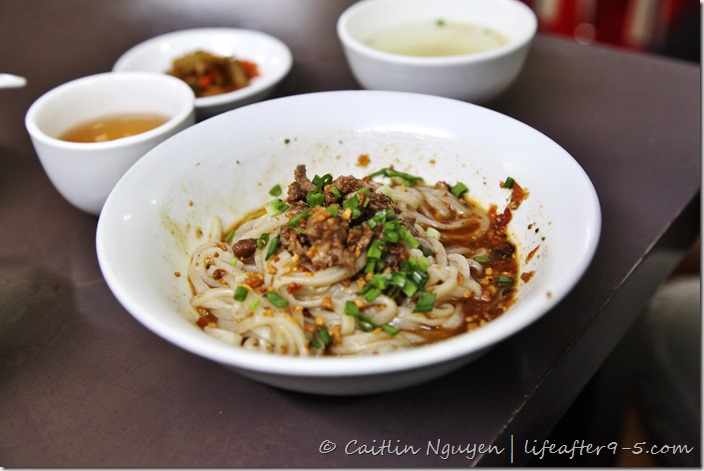 Shan Noodles – Shan noodles is another well known dish in Myanmar.  It can be found anywhere, but is most commonly found in Mandalay and Shan State capital, Taunggyi.   The soup consists of thin rice noodles in a light broth with chilli-marinated ground meat topped with fried garlic and shallots.  It can also be served dry (sometimes called a salad) with a bowl of broth on the side.  The dish is relatively simple, but is comforting and delicious. 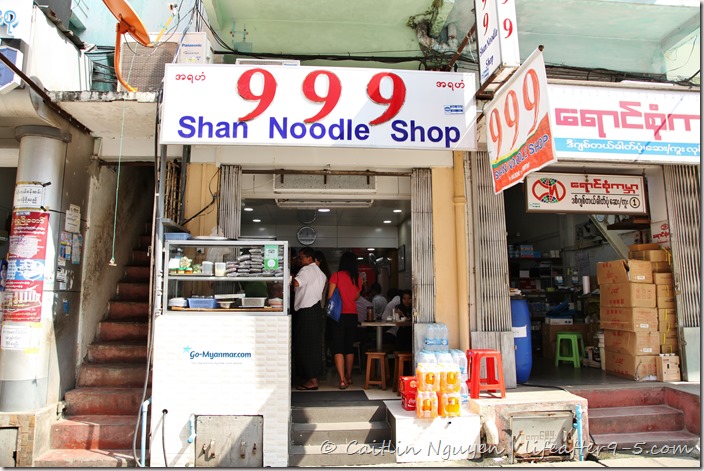 Our first experience with this soup was at 999 Shan Noodle Shop, a highly rated restaurant in the city.  The conspicuously small shop front has three levels and plenty of seating, so there was no wait. Each bowl of noodle cost about a dollar, which is on the expensive side here, but I won’t complain. We both had 2 bowls each and lunch came to about 5 dollars. 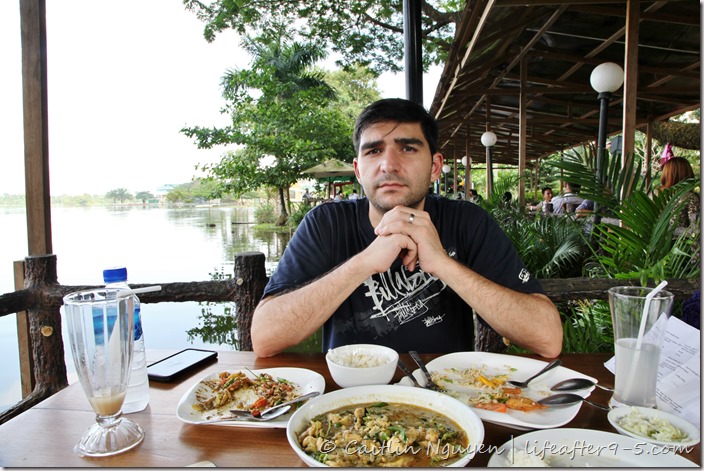 Zephyr Café – Located right on Inya lake, this place is a haven on a hot day.   The waterfront garden surrounded by greenery is a nice change of pace from the dusty streets and blazing sun.  Our table was right by the water with a nice view of the lake and a cooling breeze. It’s a great place for lunch when you need a break from temple hopping.

For lunch we had iahpet thoke – Burmese fermented tea leaf salad.  The dish consists of fermented tea leaves, shredded cabbage, sliced tomatoes, crunchy deep-fried beans, dried shrimp, peanuts mixed with chili and garlic.  It has an interesting taste with tons of texture in every mouthful.  This salad is a staple at most meals and can be eaten alone or with rice. We also ordered the chicken green curry and the dried-fish fried rice, which was very flavorful and moist and a personal favorite of mine. The whole meal with two drinks came to 16,000 kyatt, about 15 dollars.

Grilled seafood – In Chinatown, on the busy 19th street, you’ll find a mix of foreigners and locals at the countless restaurants selling all kinds of food.  There are seafood and skewers of meat of every kind for relatively cheap prices.  If you don’t feel like BBQ, there is also a menu of food that can be prepared like fried rice and noodles.  Walk around the different storefronts until you see something you like and then pull up a chair.  But be prepared to share a table because this place gets very busy at night.  Don’t fret, because this is a good way to meet people on your trip. 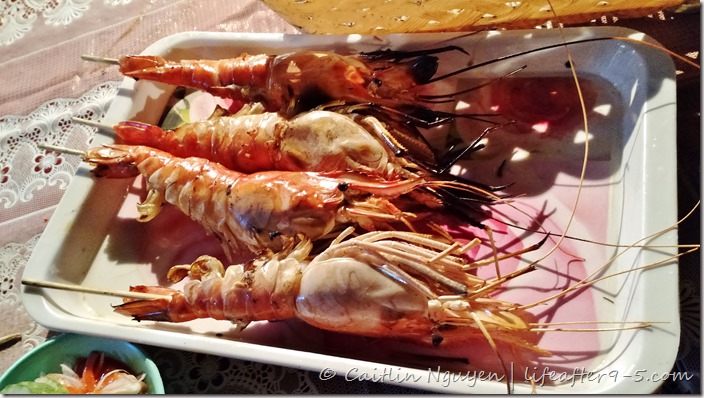 Fresh seafood grilled over an open fire is my favorite thing in the whole wide world.  I was in heaven.  For dinner we got two jumbo shrimp, a whole fish, and some squid. It only came to $25 for the two of us, including a litre of beer.  After our meal, we walked around and discovered giant mantis shrimp for $4!! In Hong Kong they would normally cost $20 to $30 dollars, easy!

Crickets – Walking around the market, you can’t help but notice the piles of crickets sold everywhere on the street.  Deep-fried insects are a local delicacy known as payit.  Often sold in a small plastic bag, and eaten as snacks.  I’ve had these before and they don’t actually taste too bad.  Once you get over the look of the bug with its spiky legs and wings, they are kinda crunchy and delicious, but it’s definitely an acquired taste.  The Burmese people seem to love them, because the vendors sell a lot each night.